Steel Wheels - BW Bradley
February 2012
It would be wrong of me to leave my review of BW's Bradley open day without making mention of the metalwork side of things. 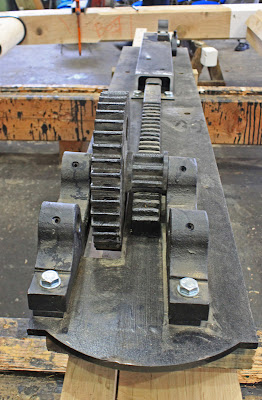 Brand new gate paddle
Sure, my eye was caught by the woodworking side of the operation but there was a lot to be seen in the metalshop. Its just like my school workshop, but on steroids to cater for the size of projects undertaken. Same oily film, same smell, same chunky machines. 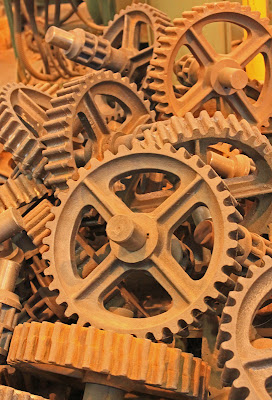 Box of cogs
We are all very familiar with the cogs which are used on paddlegear but take a couple of hundred and pile them in a storage bin and you have something which would not look out of place in the Tate Modern. 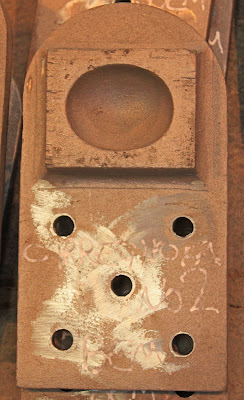 Sometimes its the smallest things which catch my eye. In this case it was the heel post sockets which are set into the wooden cill and support the hinge post. This small cup, along with the sprung straps at the top is all that keeps the huge wooden gates in place.


And then, at the far end of the workshop is the hidden gem of the site. This hasn't always been a lock gate factory  - it used to be a working boatyard complete with two dry docks and, get this, a rotating boat holder which allowed boats to be rolled over and have their bottoms worked on from above! I had completely forgotten about this contraption which was featured in the BCNS Boundary Post a couple of years ago - it even had a photo of it being used with an inverted boat but I cant find a copy anywhere. Can someone send me a copy please? 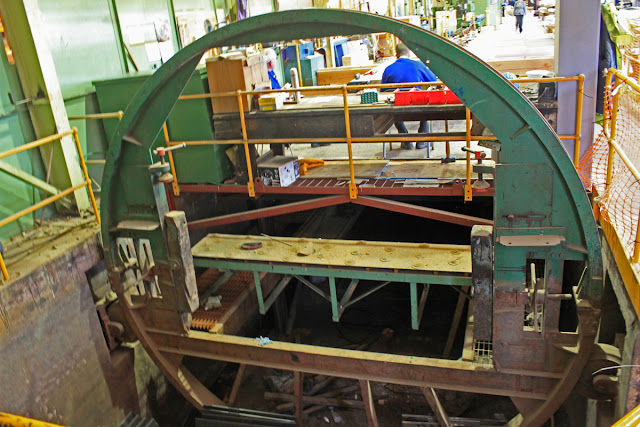 The canal end of the circular boat holder remains but the inside disc has been dismantled to provide more factory floor space. Lets hope the the dismantled sections were stored away in the dry dock as this must surely be the only one of its kind in existence? 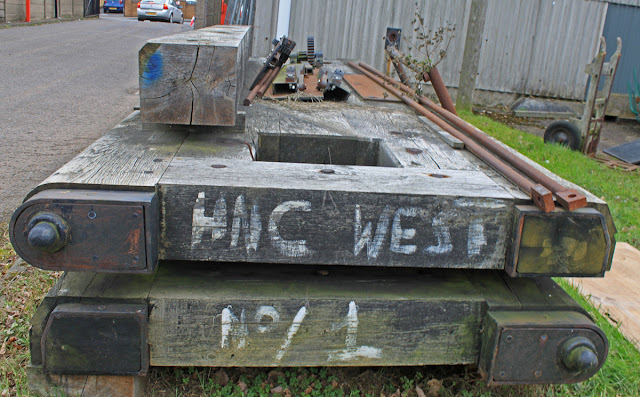 Given my love of the Huddersfield Narrow Canal you will forgive me a final photo which links this site to the trans Penning route. As a rule the HNC gates are built at Northwich, but for some reason a pair of gates were made at Bradley and have remained stored next to the workshop, mellowing away to a mature gray / green.
The public open day was a resounding success. Whilst I was there there must have been 150 people wandering around, with cars coming and going all the time showing that there is real interest in the backroom aspects of the Canals & River Trust. The enthusiasm for this sort of event depicting the "living" aspect of the inland waterways has its parallels in the dynamic events put on by the National Trust and English Heritage, which really fire up the imagination and pull in the crowds. Lets have more of this sort of thing.
Posted by Andy Tidy at 6:00 am

I'm so glad that you've posted a report - I would love to have come to the open day but it was a bit far to travel on a weekday. Now I wish I'd dropped everything and gone along.

I think these open days are great - we very much enjoyed the one at Caen Hill last year. Let's hope they do more - it's nice that they're free but when they're an etablished charity maybe a modest donation might be in order!

Perhaps if more people knew how little kept the gates in place, they might make more effort to stop crashing into them. I think this new level of openness is a great idea, and can only help people appreciate more the work involved in keeping the system open and operational.