Canals are my World - book review

Canals are my World
by Iris Bryce

Belle picked this book up from the little second hand bookstore on Beverley. 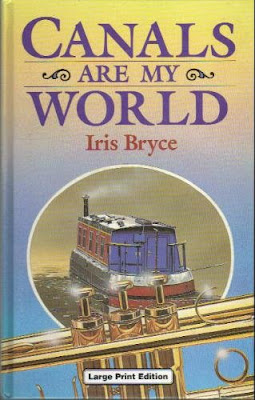 Canals are my World

I like a book to have a USP, something different about it that makes it stand out from the ordinary and at face value I wasn't sure that this one had it. Its a slim volume of 160 pages and records the ongoing travels of Owen and Iris Bryce aboard narrowboat Bix in 1983 /4 seasons as they explored the inland waterways of the north east.

I really should have read her two earlier works before this one, Canals are my Home (1979) and Canals are my Life (1982) which, as a trilogy, cover their 10 year wander around the entire then navigable inland waterway system.

They started out in 1974 on a two year trip but got sort of, well, sidetracked and sucked into the beguiling charm of our inland waterways. They managed to carve out an enviable life, living aboard Bix and cruising for 8 months a year and then mooring up for the winter and finding temporary work to pay for the next year. In addition Iris was a freelance journalist and with one thing and another they managed to fund this peripetitic life.

In reality the book only covers 1983 in any detail, following their journey down the River Trent and its associated waterway before going up the Ouse to York where they stayed for a couple of months.

Its strange but I could always hear a woman's voice as I read this account, Iris presented their adventures in a light and engaging manner, which was never dull and swept me along with the ebbing tides on which the travelled. I think the main appeal for me was that they were covering ground I have come to really appreciate, Boston, Lincoln, Chesterfield and the South Yorkshire Navigations.

But perhaps the most significant insight is in the changes which have happened to the waterborne freight in the north east. Back in 1983 there were still huge tonnages of coal being delivered by boat to Ferybridge Power Station, a trade which ceased long ago. What was more, on their trip up towards Sheffield (Bix was too long for many of the northern canals) they passed through the recently enlarged locks, built for a trade which never materialised. At that time the locks were still manned, but the lock keepers have long gone, giving way to boater operation. It was an era when freight seemed to  have a future - what a difference 25 years makes.

Overall it was interesting to read of a canal network where commercial traffic was in its death throes, but more worrying were the scale of long term stoppages, Blisworth Tunnel Harecastle Tunnel, Netherton Tunnel, which were threatening to bring pleasure boating to its knees..

All in all its an absorbing take of a timeless adventure, and one which ably demonstrates that the best way to travel the network is 'very slowly'. Our mad dashes north fail to do the areas we pass through justice, and make me realise that all these trips are just reccies for the long slow cruises we are planning when we retire.

So many waterways and so little time. Grr.
Posted by Andy Tidy at 6:00 am