I saw a trailer for Wanderlust and thought "there is a film to avoid" - I should have listened to my instinct. The film was only out on general release yesterday, but word of its shortcomings seem to have preceded it in Derby and only a handful of viewers were present for its afternoon showing. In short,  its a clunker. 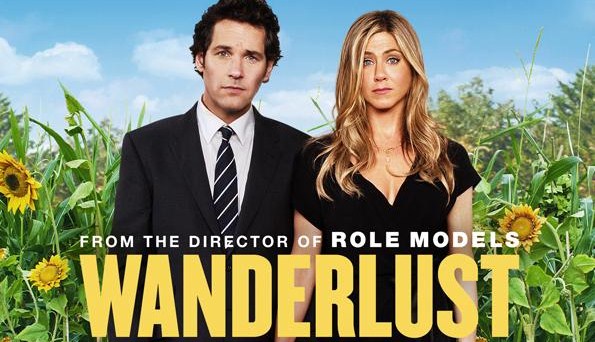 I had an afternoon out with Tilly and with the weather putting paid to a canal walk, we looked for some inside entertainment. The options at the Showcase were not terribly inspiring and the normally bankable Jennifer Aniston in a rom-com looked about right to engage a 19 year old girl.


The film is about a George and Linda, a pair of married yuppies from New York who fall on hard times and have to give up their cafe culture and micro loft / studio apartment, driving to Atlanta to take up a job with George's brother, one of the most engaging characters in the film.


Along the way they stopped off at a B&B which turned out to be a hippy commune, only to be confronted by the nudist wine maker who ran after them with his tackle out in all its glory, a sight which raised the first of many titters of embarrassment rather than the full blooded belly laughs which were being looked for.


After a mind expanding night they move onto Atlanta, returning when they decide that the commune life is for them. Sure, there are some amusing moments but the commune is depicted  in such a stereotypical way - 1970's vegan hippy dippys with shared ownership and free love a way of life. The commune's elder is Alan Alda who adds a certain Alzheimer's crazyness to the undertaking, which is led by the manic but charismatic hippy called Seth. His apparent commitment proves to be flawed and in so doing he brings a layer of instability to this alternative  Elysium.


Whilst the whole seems implausible, the story is to some extent redeemed by the exploration of the relationship between George and Linda. They entered the film stressed and in disharmony and whilst they were both attracted to the commune, it was only Linda who really engaged with it.  So it was disengagement, to engagement followed by separation as they went their own ways only to find themselves again as a couple and they use their experiences and relationships to realise their ambition and those of the people they meet.

All in all its a film which fails to work on most levels. I don't know about Wanderlust, more like Interest-lost if the truth be told.
One has to question why Aniston became involved with this project. Maybe she just needed the money!
Top tip - stay away.
Posted by Andy Tidy at 6:00 am

Shared ownership, eh? Does that make me a hippy?