This book is every bit a sequel to the Rivers of London, so don't be tempted to read it in isolation. 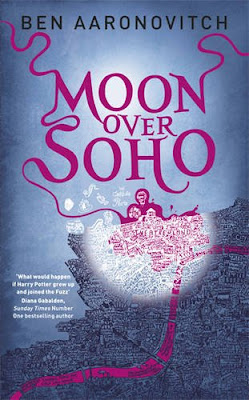 We pick up the tale Peter Grant, apprentice wizard and PC in the Metropolitan Police force's little known Magical Enforcement Division, otherwise known as The Folly.
Its a small department comprising just Peter, our erstwhile hero, and his boss / instructor Inspector Nightingale, a man of indeterminate age but who was around in the first world war. This episode finds them investigating the sudden and unexplained deaths of Jazz musicians in and around Soho. The more they look the more the headcount rises and when the usual passage of time dosn't apply, they can find themselves investigating cases which are at the sub zero end on cold.
As the adventures of this unlikely pair unfold so the scope of wizards, vampires and magicians grows and grows. Like Harry Potter before him, the central character finds himself in a battle for which he is ill prepared. Not only is he an apprentice wizard, he is also developing a taste of sexual encounters with  supernatural seasoning - with unexpected consequences.
All in all its a very good follow up to Rivers of London, building on the existing characters and painting a believable parallel magical world around us everyday folk - teeing us up fur the next installment due out later this year.
Did I like it? well, lets just say that I already have it on pre-order with Amazon!
Posted by Andy Tidy at 6:00 am