We slept moored to Workman Gardens with the old 14th century bell tower measuring out the night in its fifteen minute intervals. ever present but not intrusive, just there on the edge of your sleeping consciousness. 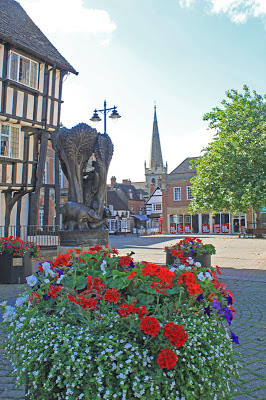 We paid the town a quick visit on Sunday morning and were rewarded with an impressive array of Medieval half timbered houses clustering around the Abbey gate house. I was particularly taken with Nat West Bank with its pronounced lean, shored up with enormous props.

The Monastery grounds contain two fine old churches, but Henry 8th did hist worst on the Monastery itself and even 100 years after the dissolution there was just a huge pile of rubble between the bell tower and the river. 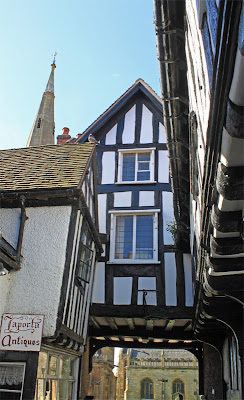 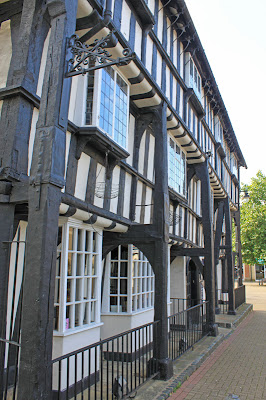 Half timbered buildings in Evesham

We took our leave at 11.00am passing the decaying remains of Evesham's iconic A framed lock keepers cottage which marks the boundatry between what was the Lower and upper Avon Navigation Trusts. Above Evesham we passed dozens of abandoned plum orchards, the trees gone wild and untended. Here and there an gnarled old tree hung over the river and it wasn't long before we had collected a bucket of Damsons for jam and another of sweet eaters.

But a difference a day makes. Yesterday the Avon was a sluggish stream with a barely discernible flow but today it was running high looking like chocolate coloured soup. Yup, the Avon had gone into flood on us and had risen high into the Amber. In the main this was OK, but where the river approached the locks and started to shoal the flow increased dramatically, as high as 3mph in places and made for very slow going. We opened the throttle and barreled on, water swirling from the bows and a deep trail of bubbles following behind as the crept from bend to bend. 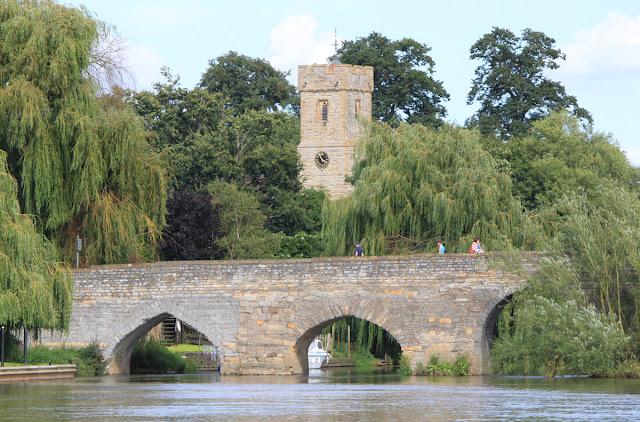 The locks passed at regular intervals, all set against us. These were restored / rebuilt in about 1970 and they are not doing badly. Some are a bit crude in their construction and are fitted with recycled paddle gear from the Thames, and the cranked tubular lock gates are one of a kind, but it all works. Watch out for the strong water flows in the locks - no ground paddles here.

I had been re reading Charles Showell's Shakespeare's Avon and I found the arrangement of locks confusing. Whilst the mill locks are generally still in the same places, many of the others have been moved to permit the removal of the old water gates. As a result its difficult to reconcile the old maps with today's configuration. 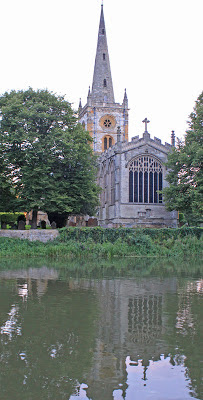 The flood waters were entering from the east and the high flows ceased as we passed the Stour south of Stratford, easing into the riverside moorings at 8.00pm, just as the sun was setting and about two hours behind schedule.

The Avon is a fickle river.
Posted by Andy Tidy at 6:00 am