By Lock and Pound - book review

By Lock and Pound
by Vivian Bird
October 2012

Oh how I struggled over this book. I found it in the little second hand bookshop in Upton on Severn and I had it in and out of my "to buy" pile three or four times. 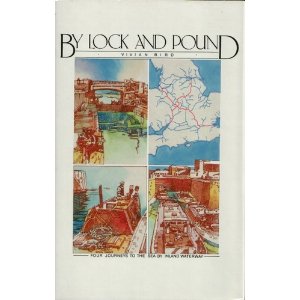 £8.50 for a slimline hardback by an unknown author presented such a dilemma.

In the end I was persuaded to buy it (Belle's view is that any money spent on a book is a good investment!) because:

1. The author was a professional journalist so that pretty much assures that it it written to a decent standard;

2. The book covers the period 1952 / 53 which was a pivotal period for the inland waterways and;

3. The book represents four distinct journeys out from Birmingham, my adopted home town.

I am so glad I bought it as it has turned out to be a real gem.

The concept was born under the arches of Snow Hill Station as the author was working the Norman Chamberlain down the Farmers Bridge Locks and, as he rested on a balance beam, he mused that you could travel downhill to all four corners of the system from Gas St Basin. From this kernel of thought grew a challenge - to travel each of these four routes over the next two years.

His initiation into canals was via the purchase of the Norman Chamberlain from Claytons of Oldbury for use as a Boys Club adventure vessel. From this platform he  explored much of the BCN as part of a BBC outside broadcast cruise which serves as an introduction to the book.

Then he is out seeking boats to convey him on his desired routes. When I explained the concept to Belle she exclaimed "Oh - you mean the Grand Cross", which whilst displaying a worrying awareness about all things canal, was actually completely wrong. His choice of routes do indeed form a cross but almost perverseley avoids Brindley's masterplan.

The book recounts an expedition from Cardiff into Sharpness and then back to Birmingham via the Worcester Birmingham Canal. He is not a slave to authenticity and is quite happy to have merely covered the water and the sequence of craft is not entirely linear. His travels include several boats at different times but the key objective is to get all the bits to join up. This is fine for me, a man whose boat lives on the Four Counties Ring but who has never yet set out to complete a single circuit of said route without deviation or repetition.

Next up is the journey to London on the Boys Club boat as part of the Coronation celebration - completed over 5 long days on the Grand Union.

The third trip was on a working pair of oil boats running empty from Oldbury to Ellesmere Port and the Manchester Ship Canal. This was possibly the finest section as it provides an 1st hand insight into family life on the Shropshire Union run, one of the last commercial routes. I wasn't too keen on the idea of sleeping on the bows with diesel fumes lulling him to sleep - but read about that yourself.

An then the last and most challenging route - Birmingham to Hull. I am not sure that this was ever a major trade route, but by the 1950's the Trent and Mersey around Burton was nearly a boat free zone with months elapsing between movements.  This meant theat the author had to be creative, hitching a commercial ride to Fazeley and then walking, bussing and training his was to Nottingham. It was here he picked up a ride on a Trent Tug, hauling a couple of dumb barges down river and out onto the Humber. The scenes he describes from Newark on are virtually unbelievable, quaysides thronging with craft from all ports round the world - a far cry from the scene which presents itself to the contemporary traveller.

And so we end with Vivian making his way back to Birmingham, stopping here and there to get a glimpse of the bits he missed on the outward journey. By now he was hooked on canals, but the book was a long while in gestation - 35 years to be precise - but it was worth the wait.

The good news for you is that second hand copies are easily obtainable on Amazon - and will cost you considerably less than I paid!

Halfie - I cant proof read to save my life. Duly corrected.

I have just ordered a copy on the strength of this

Brian - you wont be disappointed.

Brian - you wont be disappointed.

Brian - let me know what you think.