We awoke to a steady drumming on the roof - strange as there was no rain forecast, but that's the British weather for you. 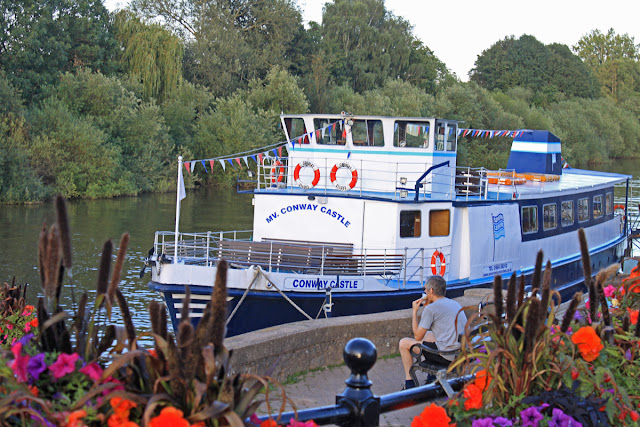 It eased of at 8.30am so we set off, only for the wetometer to crank itself up to deluge status and we made a soggy entrance into Stourport, a town struggling to rouse itself after a weekend of revelry. The populace were very much like the water tap in the basin, a bit slow but got there in the end with the shops opening for business at a time somewhere near those published in their windows. I went in search of an i-pod adaptor and a jam funnel and much to my amazement was successful on both counts.

It was about now that I discovered a snag with my mid season oil change plan. The new oil was fine, but I had put the old filter in two poly bags which had both had leaked in the foredeck producing a mini Torrey Canyon of heavy black oil which was dribbling slowly out of the drains, leaving a swilling kaleidoscope of shimmering colour in our wake. Not quite the eco friendly disposal I had in mind!

Then there was the mini boat jam as we attempted to descend through the narrow staircase locks into the Severn below. We were all hanging on to whatever we could reach with seemingly little action below. I eventually made some enquiries and was advised that a boat was rising who insisted that he HAD to have a clear run through all four locks before he could start. Clearly this is nonsense but by that time he was just about through so his whim was pandered to. 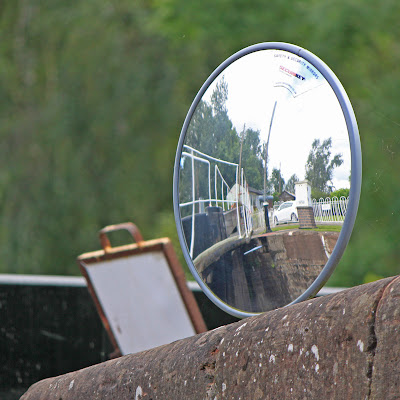 Notwithstanding the delays, we were out onto the river at 12.00 noon and by now the weather was clear and warm, as forecast. After weeks of floods the river was comfortably in the green but retained a good flow of fresh. We zipped down the river, quickly ticking off the locks as we went: Lincombe and Holt before passing the entrance to the Droitwich Barge Canal which we last entered in May. 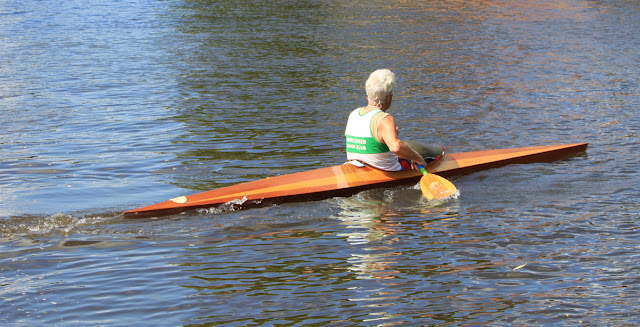 Robert with his veteran K1

Then it was Bevere Lock where I acquired the company of Robert, a fellow traveller but one who knows these waters far better than me and who accompanied me all the way to Worcester. Robert is a lifelong canoeist, founding the Worcester Sea Scouts and the Worcester Canoe Club whose impressive club house borders the racecourse. He is now 78 and is paddling a very unusual 1960's K1 made out of ply - and a veritable object of beauty it is too. I asked him how long he had had it and learned that he bought it for himself as a 77th birthday present. It was a state of the art racing boat made in Holland and would have been of Olympic class in its time. As for Robert, he has canoed at national level in a number of canoe disciplines over the years and just two years ago completed the Droitwich mini ring in under four hours. Not bad for a man approaching 80! 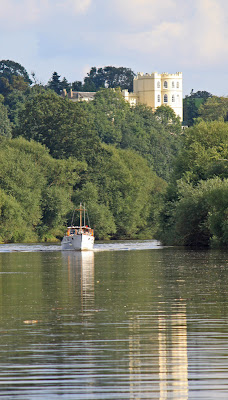 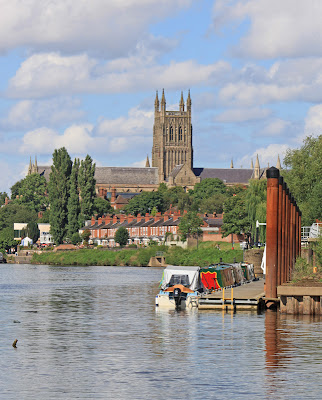 Then a moment of panic, Belle tells me that we are meeting friends at Saul Junction at 2.00pm tomorrow - but I was working to the same time a day later. Suddenly it was imperative that we clear Diglis Lock and press on down as far as we can tonight. However, a quick text revealed that Belle had the day wrong and there was time for an overnight stop at Upton after all. Phew!

Upton is a great little place, one of the few towns which borders the river but the moorings are always over subscribed. The alternative is a night in the Marina but even with all their facilities  their £25 a night charge is ridiculous. The upper pontoon was occupied on both sides but the outer boat was single moored so we asked if we could moor alongside. Not too keen initially as they has  a nervous dog, but then they relented and were warm and engaging, helping us tie up in a swift current. 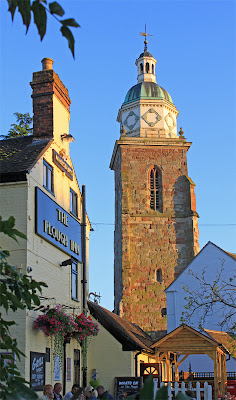 We had a pub meal on the waterfront watching a beautiful sunset with the Blues Festival area being assembled on the field opposite. I always enjoy my stops in Upton.