This was our second trip with Alvechurch Narrowboats (ABC Leisure), taking nb Spotted Crake out from their Alvechurch base. The original plan had been to complete the Stourport ring, but high rainfall was threatening to close the Severn and we therefore decided to amend our plans at the 11th hour. 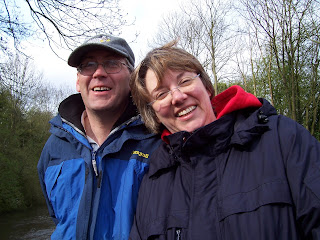 Day one - Alvechurch to Gas St Basin
This was something of a busmans holiday, as I don't think we were ever more than 20 miles from our home in Sutton Coldfield. The boatyard had warned us about not mooring beyond Wast Hill Tunnel on the first day, as there are restless natives around Bournville. I am never too good at taking this sort of advice so we pressed on heading for the city centre. We arrived at Gas Street Basin at sunset and I carefully backed Corncrake into a berth at the back of the basin, beyond the moored working boats. This was alongside a nightclub but fortunately this was closed and we had a remarkably quiet night. 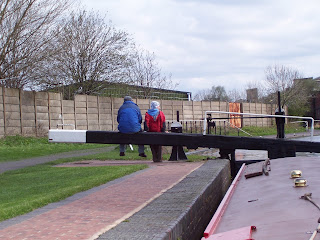 As belle pointed out when we moored up at Gas Street Basin, "you really know how to show a girl a good time, don't you?. Other husbands take their wives to exotic places like Barbados but you: no, you bring me to the back end of Birmingham and then on to exotic spots like Tamworth and Stourbridge - wow!" Belle can be a bit caustic at times....

Day two - Gas Street to Dog and Doublet
We set off in glorious sunshine but the sudden change of plan meant that instead of travelling across to Wolverhampton and having plenty of time to show Belle how to steer a canal boat and work the locks etc, we were straight into the Farmers Bridge flight. She took it in good part and we emerged into Waterlinks in one piece. Rather than take the straight route down the Aston flight, we decided on a detour down Digbeth Branch's six lock Ashted flight, taking in Typhoo Wharf, the Bonded Warehouse and the old FMC building before turning left below Camp Hill locks and then down the Garrison Flight to the Saltley Cut. We suffered some minor inbound in this area but nothing too serious - we kept our heads down and pressed on, finally reaching safety beyond Minworth and stopping for the night at The Dog and Doublet, near Kingsbury. 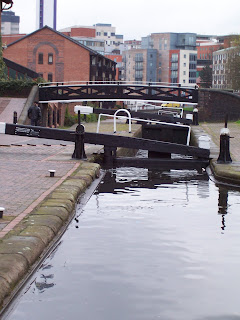 Day three - Dog and Doublet to Colwich
Another fine and bright day, first taking us to Fazeley, then on to Fradley and finally coming to a halt in a quiet rural location, just before opposite Bishton Hall School, near Colwich.
We paused at Whittington Bridge to restock at their village supermarket, a pleasant little village which has retained a good set of local amenities. 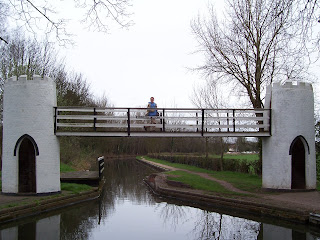 The rest of the day took in the delights of the Swan at Fradley, the narrows at Spode and the broad views of the upper Trent valley. Unremarkable scenery but very "Middle Engaland".

Day four - Colwich to Coven
The week turned colder by the day, so this one was spent muffled up as we made our first passage up the Staffs and Worcester. Tixall wide was a delight and the tumbledown cottage at Deptmore was an eye opener into what is, and isn't, considered habitable.
The end of the day was spent climbing up to Gailey and passing what was to become our home mooring - not that we realised it at the time. We pressed on till we reached the Fox and Anchor at Coven and ate in the pub, playing cards and generally having a good family time together.

Day five - Coven to Stourbridge (Town Wharf)
Today included the back end of Womborne, the Bratch "nearly staircase" (no lock keeper so we worked it out ourselves) and then finally turning into the Stourbridge Canal at Stewpony. The first section of the Stourbridge was very pretty, and we considered mooring at Primrose Hill. In the event we pressed on to the Town Arm, mooring at the end as the moorings outside the secure area felt very exposed. In the absence of a bankside mooring we tied up alongside the trip boat under the Bonded Warehouse just as darkness fell. 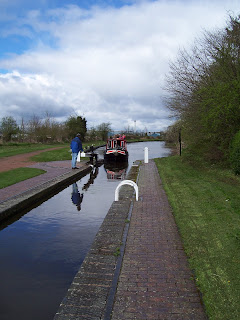 Day six - Stourbridge to Black Country Museum
A busy day through the industrial heartland of the Black Country. The Delph flight was a delight followed by the bleak open spaces of the Merry Hill Shopping Centre, good only for the Sainsburys which is within easy reach of the re routed canal. The section beyond Blowers Green lock was pretty pasture and common land with Netherton Church standing proud on the hilltop. It was hard to imagine this area as a hive in industry. 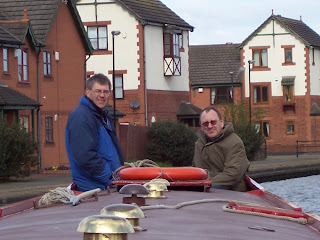 With daylight fading we made our way through Netherton Tunnel, emerging into the twilight and snowy squalls - fitting weather for the BCN Mainline! A final push in blizzard conditions saw us up Factory Locks in Tipton and then through the maze of waterways into the secure moorings offered at the Black Country Museum. The day concluded with fish and chips bought from the small parade of shops opposite.
Day seven - Black Country Museum to Hopwood
Saturday - a day for sociability with our best friends, the Bat people. T&M had never travelled the BCN before so they drove one of their cars to our destination, the Hopwood House Inn and used the other to get back to the BCN Museum. Our route for the day followed the Old Main Line to Smethwick, where we descended to the New Main Line, which then led us into Old Turn Junction having first whizzed round the various "loops" (Soho, Icknield and Sherborne). We lunched opposite the Mailbox and marveled at how boats seem to be taken as public property. We sat inside eating our lunch and every Tom, Dick and Harriett peered in at us! One Asian gentleman with very small son even climbed onto the front deck for a better view.... come on down... 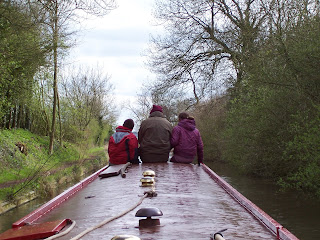 The day concluded with a run past the Cadbury's factory then back under the hills, this time through the lengthy Wast Hill tunnel. Wast Hill marks the watershed between urban and country, after which it is rolling fields right up to Hopwood and a good meal.