Why Captain Ahab? is usually the first question I am asked, and its a fair challenge.

Captian Ahab was a name given me by one of my children's teachers, who liked the works of Herman Melville and knew of my passion for boating. When I set up this Blog all those years ago I needed a semblance on anonymity and Captain Ahab I became! Since then Captain Ahab's Watery Tales has grown and become well known in the world of the inland waterways and it would seem a shame to consign him to a watery grave. 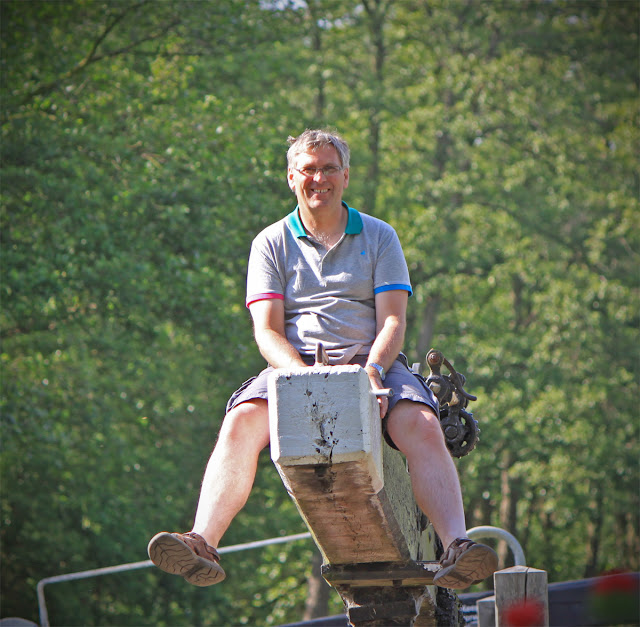 The Captain is supported by his wife Helen, who has found herself sucked into his watery world, but actually prefers foraging on the towpaths and making delicious preserves. What started as a bit of a hobby has grown out of all recognition in the shape of Wild Side Preserves and you will find us at many of the Midlands canal festivals selling from The Jam Butty, an interest which will be much more to the taste of the foodies among you.

The heartbeat of this enterprise is the uber reliable Wand'ring Bark, without whom none of this would be possible. She is a 42.5 ft narrowboat (I will tolerate the description 'barge' but never 'longboat'), built in 2003 with 38hp Beta engine which has never missed a beat (which is more than can be said for the long suffering gearbox(s) which were never designed to move two boats). She is not glamorous but the old girl she gets around a bit! However, Wand'ring Bark now shares the limelight with Montgomery or, as she is better known, The Jam Butty. This 27ft butty was built out of two other old boats is real eye candy for boaters and serves as a sales platform for the expanding preserves business.

As for me, I am creeping up on my late 50's and am celebrating over 45 years afloat. My love affair with the canals started with The Captain Snr, my father, who introduced me to the delights of the BCN in the late 1960's when things looked very different. Even at the tender age of eight I harboured dreams of one day owning a narrowboat, if I ever came to live in the Midlands.... and here I am.

My curiosity about canals extends even to those which no longer exist. In fact if I were to appear on Mastermind my chosen subject would probably be the lost canals of the BCN. I walk them, photograph them, write about them in canal magazines and even make videos about them.

As for my real persona? It's really no secret these days. My name is Andy Tidy and I you want to get in touch with us just leave a comment with your e-mail address.

I hope you enjoy my Blog. It has become something of a sprawling monster which fuses my interests in waterways, the industrial revolution and photography, but it's important that you remember that its primary audience is me. Like Wainwright, I worry that I will lose my ability to get out and about as I get old, and I want something which will let me reflect on my past adventures.

Increasingly the blog has become something of a 'go to" location for information about lost canals and, over time, I am introducing more structure to enhance the accessibility of the many archive photos I come across.

In the meantime it keeps me off the streets and hopefully provides some gentle amusement for others.