Two steps forward and one step back

Two steps forward and one step back
March 2016

Our kitchen extension was nearing completion this weekend and then, just as the end appeared to be in sight we hit a snag!

To bring you up to speed, the actual building work is materially finished with the plastering completed and painted and just the rendering and some odds and ends like skirting boards and architrave to finish off. 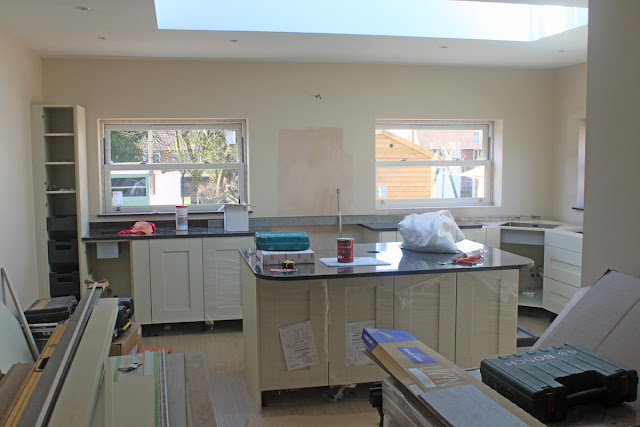 From the kitchen fitters perspective, the units are all in (60mm taller than normal to allow for out height) and Friday nearly saw the granite worktops fitted. A small misunderstanding saw the main sink section go back to the workshop for re milling and then it was back and fitted on Saturday. At the same time the flooring was laid and that just left the plumbing and some final electrics. All that would be outstanding would be the cooker, which is due to be shipped from France next week. 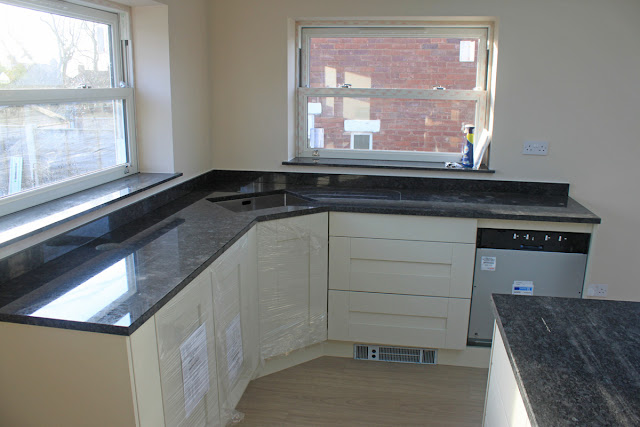 But then today our great game of snakes and ladders hit a snake. As soon as the plumber arrived he set to fitting the toilet in and securing it to the floor - only to discover the route of the water pipe BEFORE it reaches the stop cock! This isn't as bizzare as it sounds because its a very old house which had its mains water retro fitted and then adapted for a very dodgy kitchen extension in the 1980's. As a result no one knew the line of the pipes and we found out the hard way. 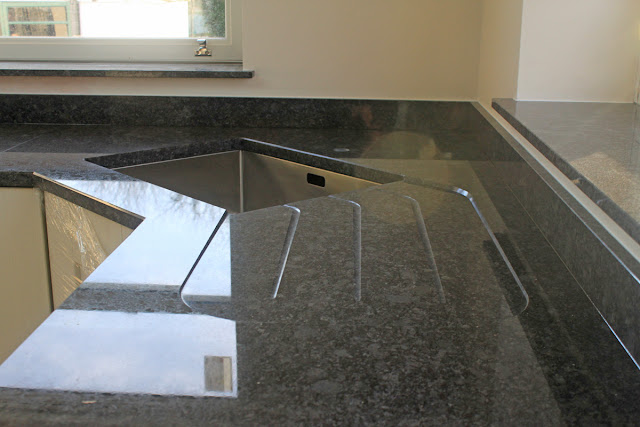 I had a panic stricken call whilst I was in Asda some miles away and my Mother in law supplied all the towels in the house to mop up the growing flood. All this time the plumber was running up and down the row of cottages trying to find the relevant external stop cock. Eventually it was found but as a result all four cottages were left high and dry without water for a couple of hours whilst a hole was hacked out of the concrete and a repair effected. 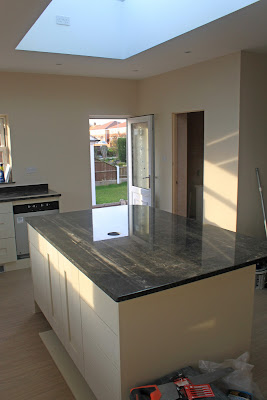 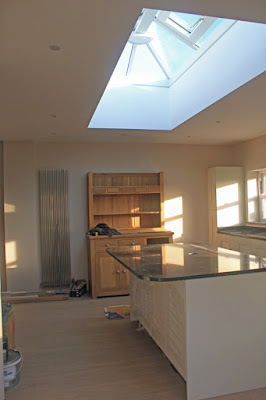 The end result was half the flooring pulled up to dry it out and the kitchen project considerably further back than when we started the day.... Grr.

However, its only stuff and it will get fixed so there is no point stressing. The kitchen fitter was amazed that I seemed to take it all so well but as I pointed out, its hard to get worked up about it when your wife has just negotiated a huge cancer operation and appears to be making an excellent recovery. Against that backdrop whats a few gallons of water.

My poor long suffering neighbours all rallied round an far from driving them to distraction they all appeared this afternoon with flowers for Helen.

We are getting there and we even have one working sink which was enough to inspire me to pick five Kg of Wild Garlic, which was washed and mixed with Cider Vinegar ready for a six week infusing period after which it will be 20 litres of our highly popular Wild Garlic Vinegar.

Its curtains I am afraid

Its curtains I am afraid
March 2016

No, No, No - Helens recovery has not taken a dramatic turn for the worse!

If fact her surgery this week was very successful and she is now back home and embarking on what will probably be a longish recovery. The surgery has caused us to delay the start of our cruising and trading this year but with no kitchen at home production was always going to be a challenge. 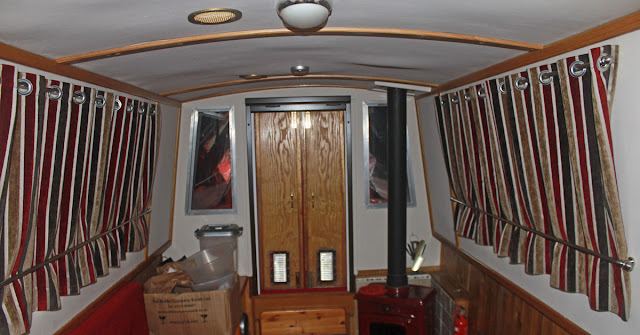 And so with our wings well and truly clipped work on the boats has slowed down a bit.

But there has been progress with new cushions bought for the saloon, the kitchen completed bar a few details and most recently we have added new curtains which are suspended on the John Lewis version of fiddle rails. 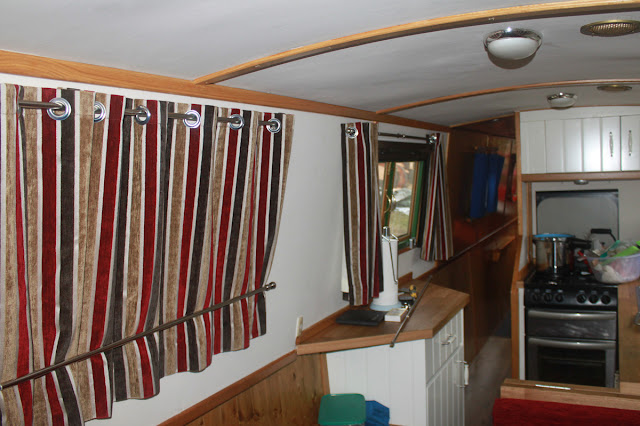 Of course, an extensive list of "to do" items remain including solar panels, new batteries, a new table (project started) and possibly a generator. But all that can now be done at our leisure. 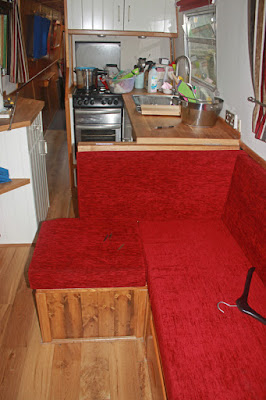 For now the boat is completely workable and ready for service just as soon as Helen feels up for a trip.
Posted by Andy Tidy at 10:25 pm 1 comment:

An end to Pigeon poo

We have been mooring at Longwood Boat Club for 10 months now and during that time our mooring spots have moved around a bit, but the butty was finally moved behind the motor in the autumn.

This was good news but it came with a sting in the tail - Pigeon Poo. 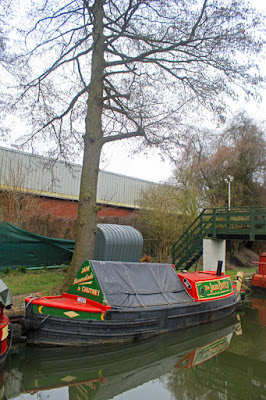 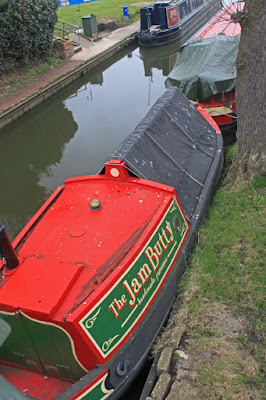 Target practice for the pidgeons

Our mooring is under a couple of trees and not content with dropping twigs in us they were also the favourite roost for a couple of Pigeons with an incontinence problem. Last autumn we suffered with a plague of purple poo which stuck to the boat like super glue but winter offered a respite. However the first hint of spring brought with it a return of the toxic guano. 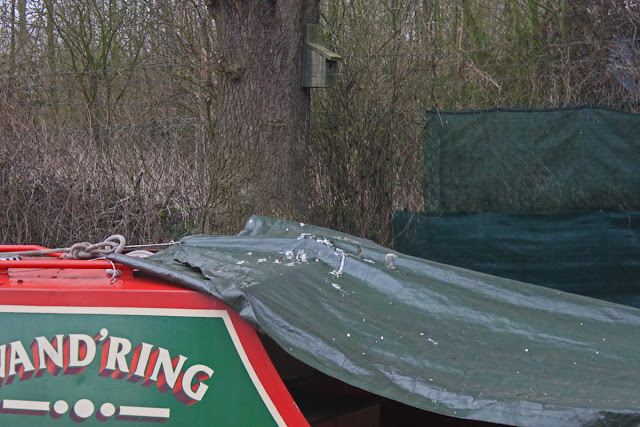 Last week the boats were fine but today they were a poo spattered mess, especially the butty which sits under the Alder tree closest to the canal.


This 50 year old tree is a menace in more ways than one. Not only does it offer birds an excellent roost but as it has swelled it has pushed the concrete piling out of true by over six inches which is making it difficult to get boats in and out.

The simple solution is to cut it down but annoyingly it had a tree preservation order on it which immediately mired us in bureaucracy. After more than a year we had the order lifted and today the tree surgeons arrived to cut it down. The day was also declared a work party day which offered an opportunity to get some of our annual hours in (5 out of 20 for me) so the club turned out in force and as fast as the branched were felled we ferried them over the cut to the bonfire. 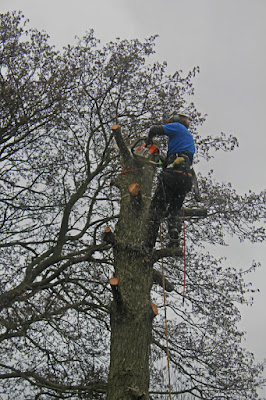 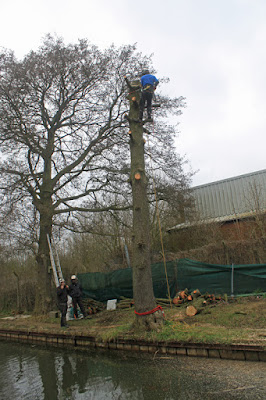 Four hours later and the tree was no more, just a mountain of logs which will keep the members fires burning for the next 12 months. For us the joy holds no bounds because it means the butty will stay clean.

There is the small problem of the other tree which will probably become the Pigeon's new roost, but its more contained and the splatter zone more manageable.
Posted by Andy Tidy at 10:39 pm 1 comment:

You may remember that I was elected to the CRT Council as a Business Boating representative at the back end of 2015. 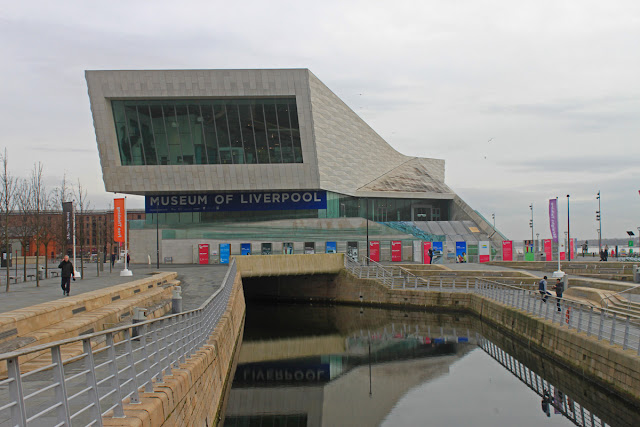 Museum of Liverpool - venue for the Council meeting.

Well, today was my first meeting, this one taking place on the Waterfront in Liverpool. 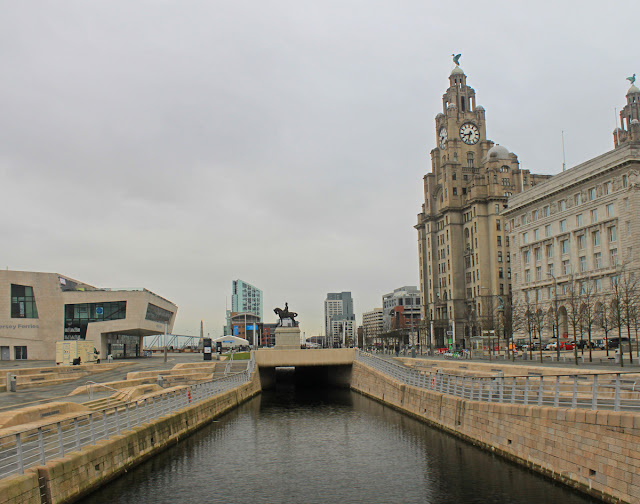 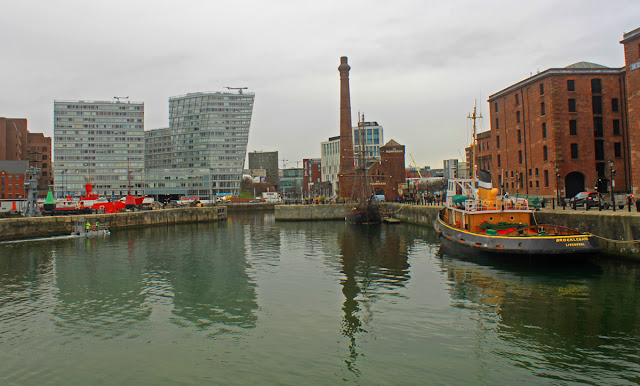 I drove up bright and early and arrived in time for a short tour of the Trust's waters at the docks which lie at the far end of the Liverpool Link. I have to admit that the Waterfront is a spectacular redevelopment, filling the gap between the Three Graces and the bank of The Mersey. 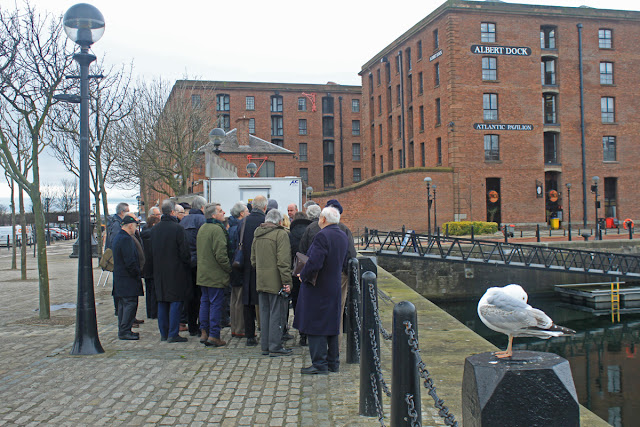 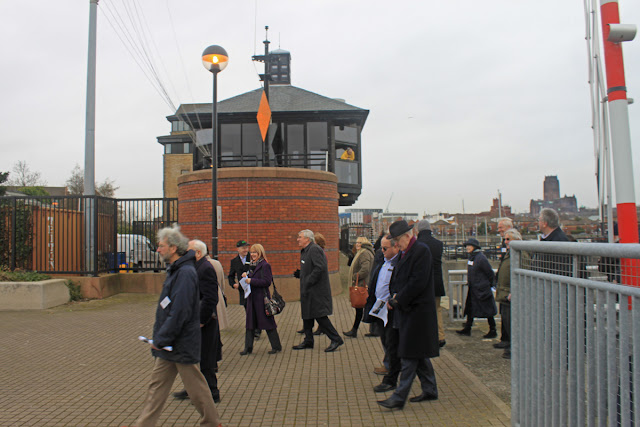 The area is jam packed with attractions and I was particularly taken with the new statue of the Fab Four, striding confidently to the Beatles shop. 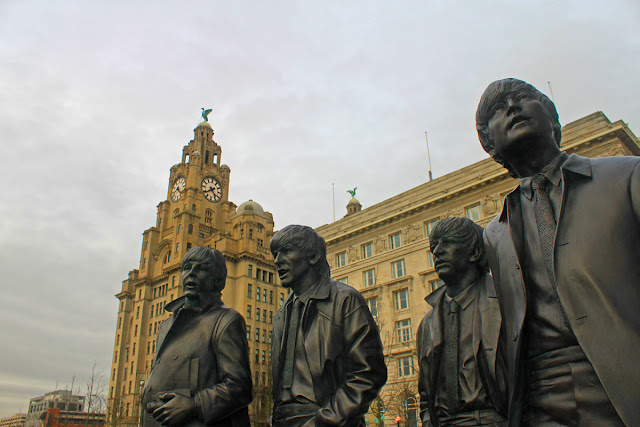 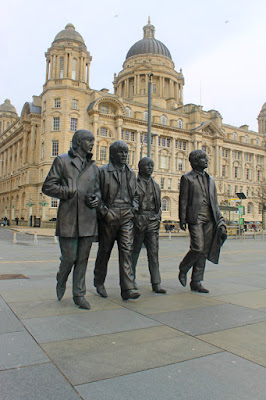 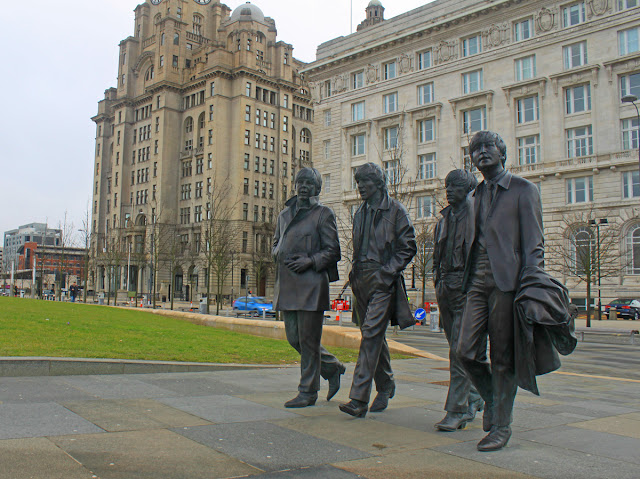 As for the Council meeting? I have to admit that I was made very welcome and the assembled members were walked through the various facets of the CRT including its strategy, recruitment and selection update the response to the Calderdale flooding, the finances and the fundraising activities. All a high level insight into the workings of the Trust for the benefit of the numerous new Council members. 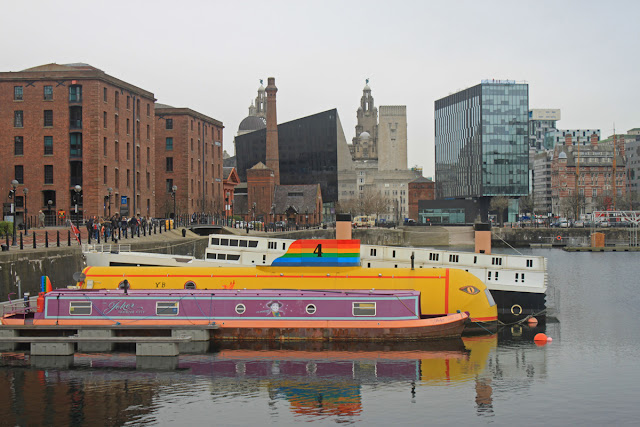 Stanley Dock with a rather unlovely - Yellow Submarine!

Due to the nature of the information download the communication was, on this occasion, rather one way. However, as we approached the end the various groups represented started to ask questions from their perspective, making suggestions about future agenda items and prompting discussions - basically doing what they are there to do.

I think its fair to say that most of the elected representatives were struggling to define the role they play in the Trust's governance structure, but perhaps having the whole spectrum of interest groups sharing and challenging in the same room is the point of it. One minute the boaters relation to The Friends is being discussed and then we are looking at the same problem from the perspective of canoeists, cyclists, ramblers, fishermen and ecologists.

And so the gathering closed at 4.15 with the next scheduled for September in Birmingham, tacked on the back of the AGM.

The building project at home has been progressing and last week saw the plaster being applied which is the major milestone when the extension ceases to be part of "outside" and become part of indoors. 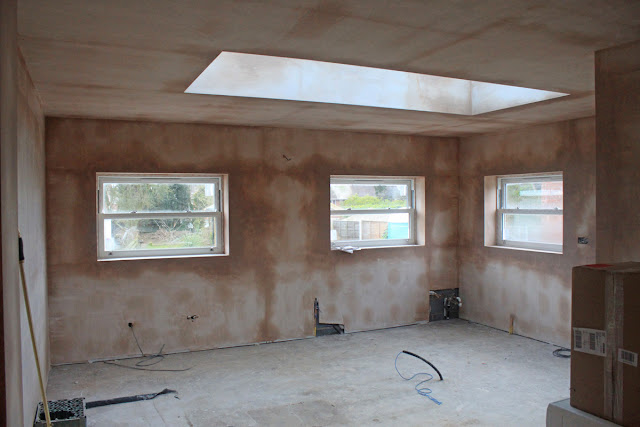 Inside the new kitchen

Mike and his building team have maintained a really good pace and another 10 days will see an end of the building phase (save the rendering which will have to wait for warmer weather) and the project will then be turned over to Robert, the kitchen fitter. This stage will probably take four weeks or so so we are hoping to have a functioning kitchen by mid April. In the meantime the washing up is in a bowl in the bath and there is no possibility of any preserve making. 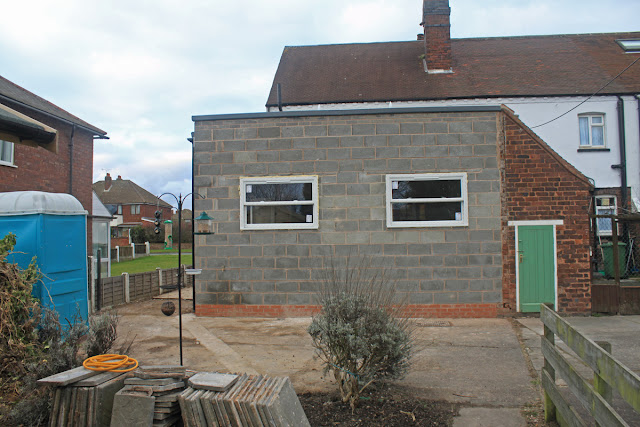 The extension from the back

Currently we are at that filthy stage where dust and grit are finding a way into the whole house but we know it will pass and as soon as the paint is applied the cleaning can start in earnest. 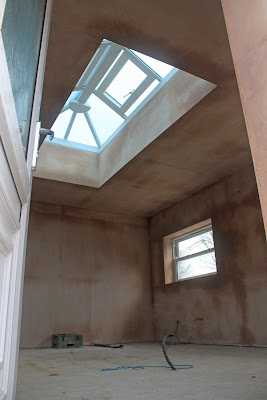 The awesome lantern window from the new back door

With a bit of luck it will have dried out sufficiently by next weekend to let me get it painted.

Just to complicate life a bit more, many of you will now that Helen is not too well and will be spending quite a bit on time in hospital which has had an impact on our cruising plans for the spring and early summer. Several events have been cancelled but we hope to get out and about in time for Middlewich. That said, little is certain and we are holding our plans very lightly.