You may remember that we had a month afloat last spring between selling one house and buying another - and here we are back afloat, but this time for approx two weeks.

Much to everyone's amusement no sooner had we downsized than we started planning a kitchen extension which will double the floor area of the original house. What everyone seems to misunderstand is our interpretation of downsizing. We want to keep the space we had, but have it downstairs - a subtle but distinct difference. 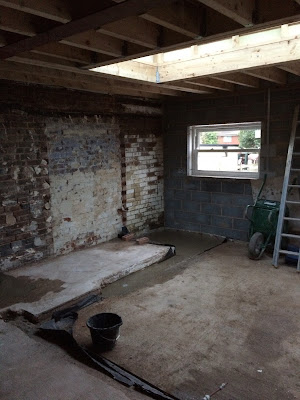 The  builders have been storming ahead and true to their word they kept the old kitchen operational for nearly a month by building the new roof right over it, which let us process 35kg of Seville oranges into the ever popular Sloe Whisky Seville and Gin Fizz Marmalades, plus a limited edition of Singletons Whisky Marmalade in support of MacMillan. 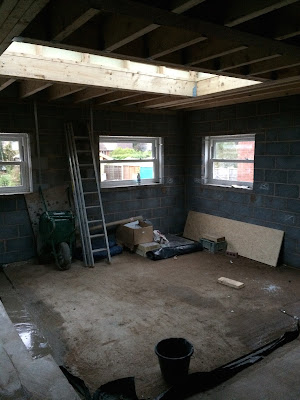 However, this stay of execution on the kitchen was always temporary because the old boiler (never knowingly serviced) vented into what is now the new kitchen. This was tolerable whilst the windows and doors were off but last week they were fitted, the boiler removed and all the old kitchen knocked down.

Time to decamp to the boat which is only 2.5 miles away. Fortunately the new galley is complete bar a few bits and bobs. The cushions have yet to be delivered but the old ones will just about fit and who needs curtains anyway. Land based friends are horrified at the thought of is living afloat in the winter but all you boaters will appreciate that with a 5kw solid fuel stove the challenge is keeping cool.

There have been a few hiccups, like the insidious clogging of the stove pipe which impeded the exit of smoke, to the point I think we had a bit of a build up of Carbon Monoxide. We both had headaches for a couple of days and my mind went back to a recent Waterways World article on the subject. The flue brush was extracted from the back of the butty and jiggled up and down the pipe which triggered a small avalanche of crusty carbon scaling and an immediate improvement to the draft through the stove. Good old WW is all I can say. One thing puzzles me - the old Valor Arden never ever suffered from a clogged pipe but this one has had issues after 18 months. I think the pipe is made of thicker steel and therefore has a narrower internal bore, but I am sure that there is more to this issue. Any ideas?

The house build is progressing fast with the screed being laid on the floor this Wednesday and the new boiler installed on Thursday. This leads to first fix, plastering and second fix and the kitchen fitter booked for the 16th March.

On a slightly less encouraging note Helen is not too well at present and a stay in hospital beckons. Sadly this will scupper our early season travelling plans and the Jam Butty will not be out and about before July. Hopefully her recovery will be far enough advanced to let us pick up the planned itinerary for the Grand Union events in the summer.
Posted by Andy Tidy at 7:10 pm 2 comments:

Getting the roof on
February 2016

The walls went up in a rare gap in the run of storms we have been having, but now our luck ran out. 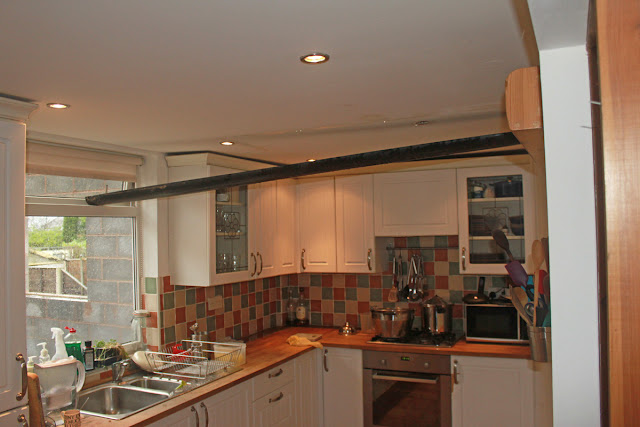 Following the installation of the steel work we were hit by a mega storm, with winds of over 60 mph howling through the skeleton of the extension. The wind found its way into the house but worse was the rain. All that clomping around on an already weak roof resulted in a whole bunch of leaks. 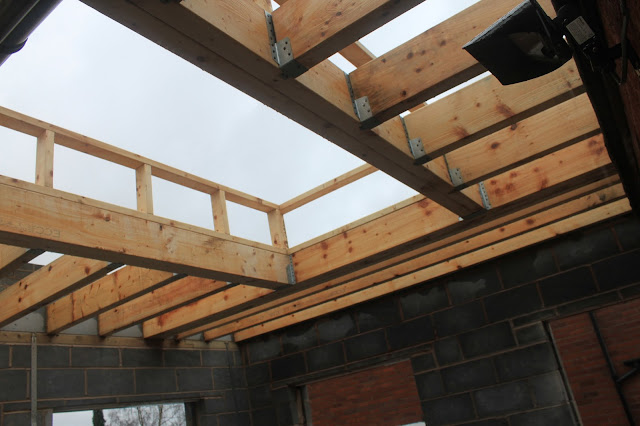 Buckets were just not man for the job so in a moment of inspiration I hooked a gutter across the kitchen and out of the window, carrying 90% of the water away. Fut plenty still found its way in rendering the old kitchen nearly uninhabitable. 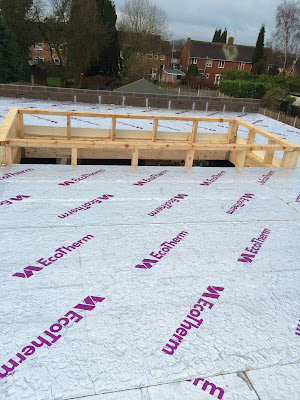 But finally the rain stopped, the lake above us drained away and the chippies arrived, first building a substantial frame including the base of the 3m x 2m lantern. That was covered with a layer of ply with about 4inches of fall, then 10cm of Celotex to keep us all snug and warm. 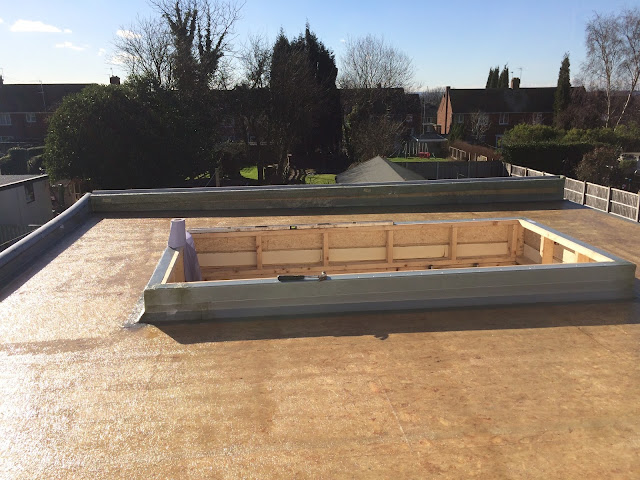 Another pause and then the contractors for the GRP waterproofing layer. To my mind GRP is the only way to go. The one sure thing about a built up felt roof is he fact that, one day, it will leak. So it may cost twice as much but we specified a GRP roof which involved another timber layer which was covered in multiple layers of fibreglass and resin topped over with a thick layer of non slip bitumen. 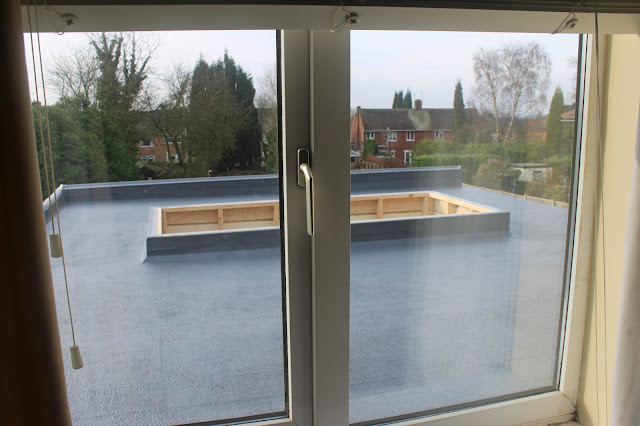 The and result is a warm and weatherproof roof which carries a 25 years guarantee.

Of course, we still have our oculus in the the middle but this will have a temporary covering whilst the lantern is built and fitted.
Posted by Andy Tidy at 6:00 am No comments:

The walls go up


With the foundations set (underwater) it was time to erect the walls.

This process is a case study in changing standards of construction over 30 years. The old extension sat on very light foundations but these are built on 18 inches of concrete. The old walls were solid made of two rows of bricks. 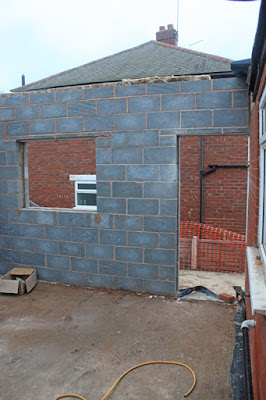 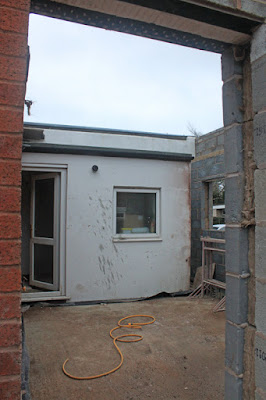 Then it was up with the walls which reached window height in just one day, at which point they were persuaded  to make a wide central pillar to better accommodate the cooker. Then another day to reach the rafter level ready for the chippies. But before the timber guys could start they had to install a huge RSJ with one end sitting on a new pillar built in the existing kitchen. 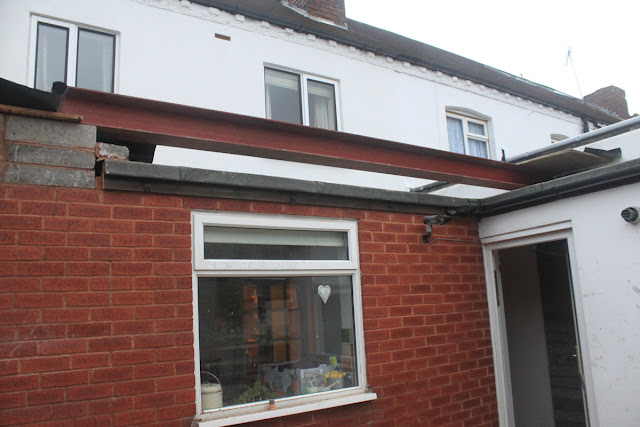 The real hero's in all this are my long suffering neighbors who are tolerating all the bumping and banging with admiral equanimity.

Its many years since since I visited Port Meirion, the Italianate model village build on a rocky peninsular in Snowdonia.

The place was purpose built to be beautiful so its really no surprise that there are surprise vistas at every corner - a photographer's paradise.

Whilst its impossible to find  unique composition it was lots of fun seeking out interesting frames. 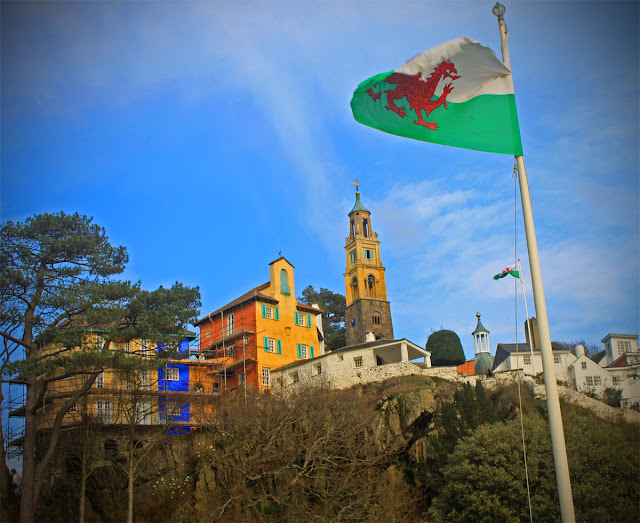 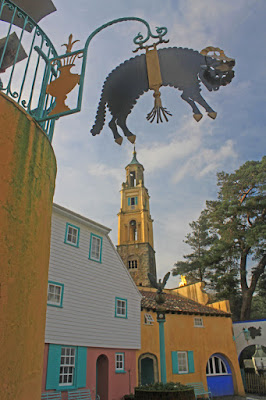 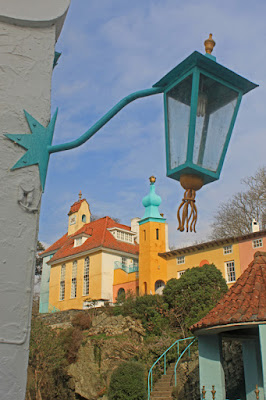 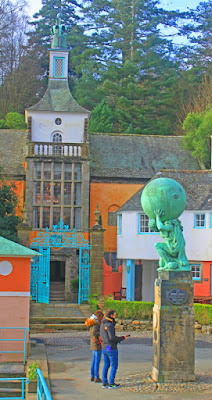 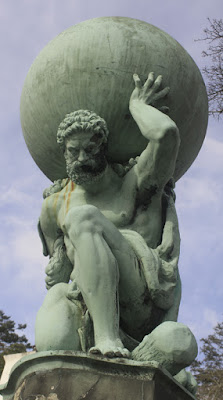 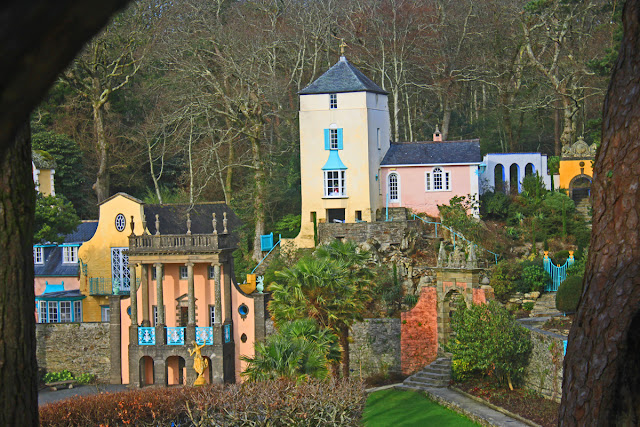 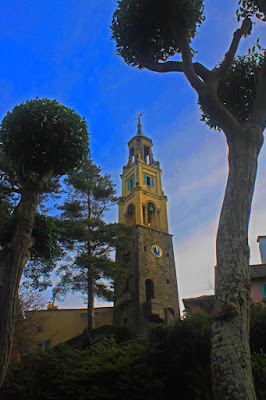 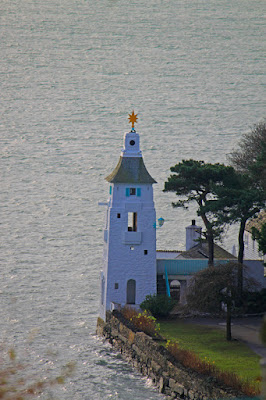 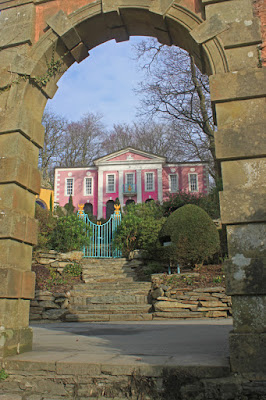 The Cemlyn Canal.... Cemlyn Canal, I am not sure I have heard of that one I hear you cry.

Well, as an enthusiast of obscure derelict waterways my ears pricked up when my brother mentioned his discovery of an abandoned waterways near the western end of the Welsh Highland Railway. 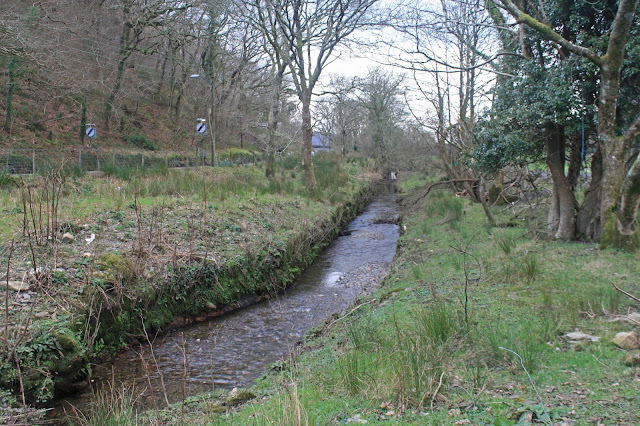 This fascinating discovery was tucked away in my memory and filed for exploration when we visit friends at their holiday home in Criccieth. A weekend visit rolled around and much to my pleasure I realised that our route in took us right past the canal remains. 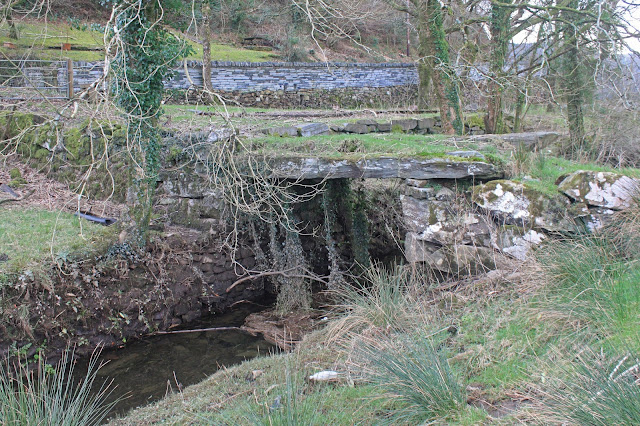 This short tidal waterways extended the navigable extent of the Afon Dwyryd to a loading wharf at Maentwrog,  312 yards upstream from a sharp bend inthe river. There were no locks, one bridge, two wharf's and only navigable at high tide. 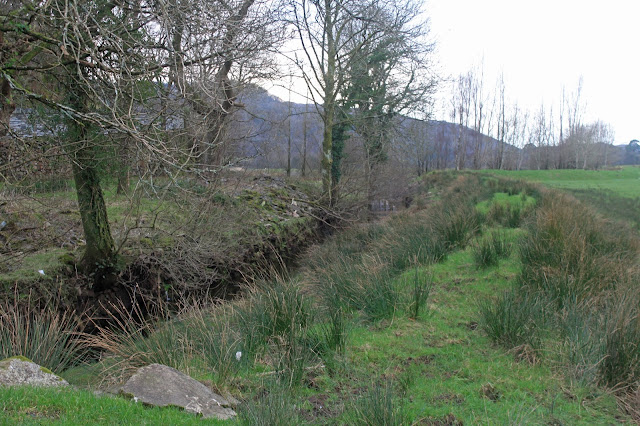 The canal was cut in 1823 to pick up slate from the local quarries in the Ffestiniog area and operated for just 35 years before sliding back into obscurity reverting to its original activity as a drainage ditch.

The canal was really one long quayside known as Parry's Wharf from which slate was loaded and dispatched to markets via the river estuary. The channel was an excavation of an established stream and even in its heyday it was too narrow for boats to turn or pass. 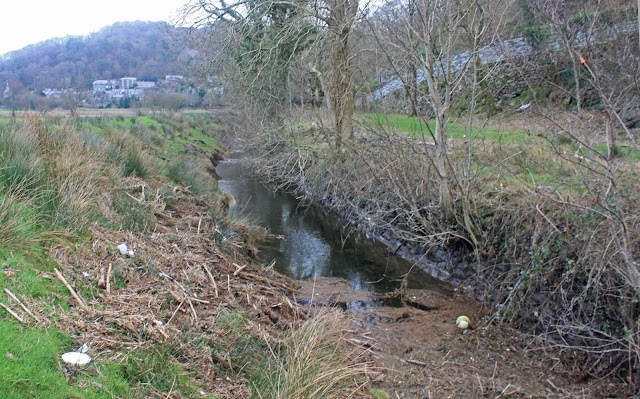 To get a feel for the maximum dimensions of the craft using the canal you only have to look at the solitary access bridge which remains in situ in its original format, and under which boats had to pass with their masts lowered. Its safe to say that this canal was a waterway for small craft only, but looking at the depth downstream in the Afon Dwyryd Navigation it was only ever capable of carrying shallow drafted boats. 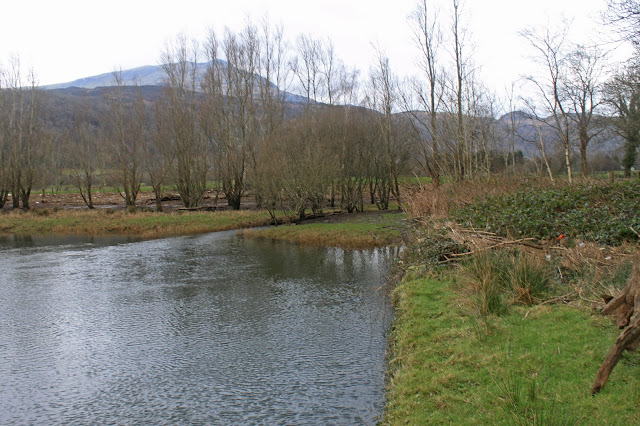 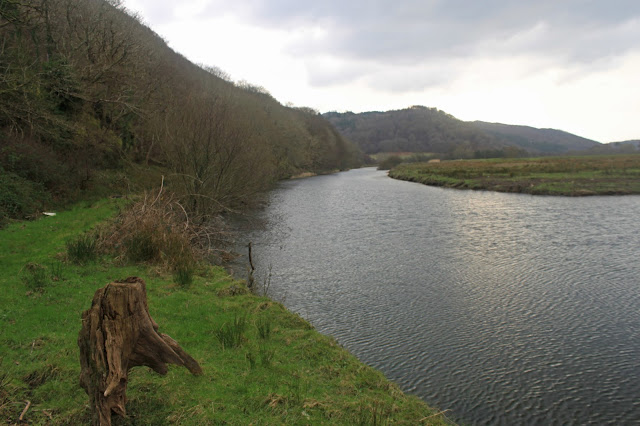 Historical records indicate that boats on the Dwyryd were operated by two men and carries an estimated six tons per boat, which was little more than the diminutive tub boats (20ft x 6ft) used in the Coalbrookdate area. A typical month would have seen maybe 43 boat movements from the wharf representing over half the boat traffic on the river.

The main motive power would have been the ebb and flood of the tide, supplemented by sail whenever wind conditions permitted. The boats would have grouped waiting for the tide and then been swept down the river navigation to coastal craft waiting out at the mouth. 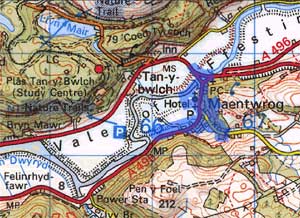 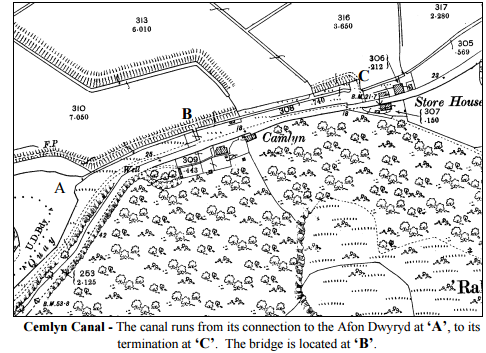 As with most canals, the construction of the Ffestiniog Railway killed the canal trade with the monthly canal volume contained in just 120 wagons. This move to rail was driven by simple economics with boats charging 15 shillings per ton vs six shillings on the tracks pre steam and falling to 2s 6d per ton when hauled by the new locos in 1864.

Digging in at home

In addition to the refitting work on the boat we have an altogether larger project on the go at home.

When we moved into our new home in Aldridge it was in certain knowledge that there was some serious work needed in the kitchen. Acutally, the work wasn't so much in the kitchen as work on the kitchen itself. 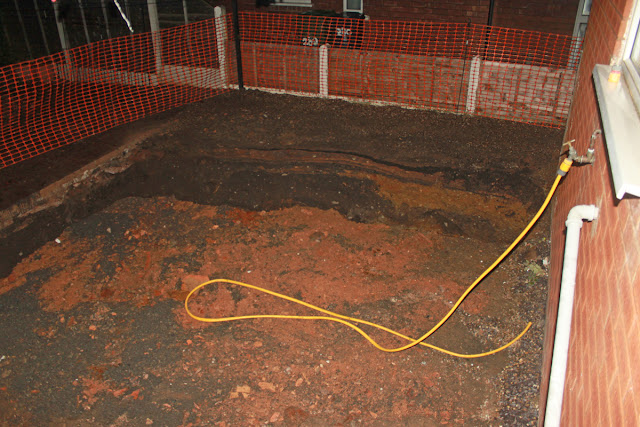 The kitchen was an extension from the 1980's and we bought the house we could see that it needed complete replacement because not only was the roof sagging and leaking but it was far too small for our purposes. The redeeming factor was that there was a good sized yard at the back offering potential to build a completely new extension which both replaces the old jerry built construction but offers a kitchen / utility with a footprint of 5.5m x 7.0m. 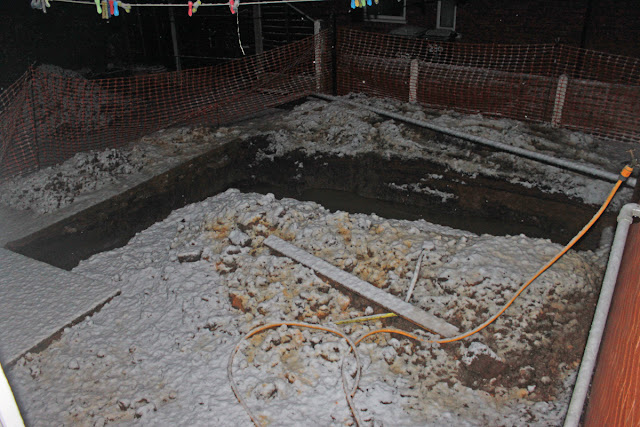 Work started one week ahead of schedule in early January with the old yard ripped up and footings dug to support the walls. A snag with the cottages is the high water table so no sooner was the trench dug than it filled with water. The process was something akin to digging a trench on the beach in the face of an incoming tide, so we ended up with a very wide foundation into which was poured a huge quantity of concrete, far more than the dribble exposed under the old extension wall.

At least we can be sure that the new extension, which virtually doubles the original footprint of the cottage, is not going to fall down.