In my last post covering the CRT National Council Meeting in York I mentioned a site visit to Naburn Locks. 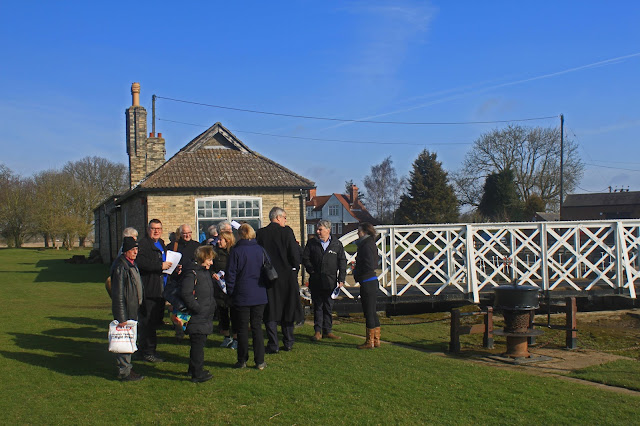 CRT and Council members gather at the Naburn Locks workshops

Naturally, I took my camera with me to record this far flung outpost of the connected waterways system, a location I would very much like to visit by boat. However, Naburn is Ouse equivalent of the Trent's Cromwell Lock. It forms the top of the tidal Ouse beyond which the waters of the Ouse are controlled. 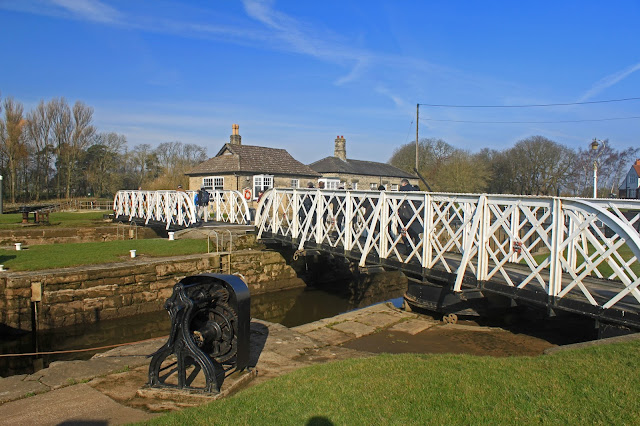 We were given a guided tour by the resident lock keeper who has lived and worked on the site for 35 years, supported by volunteers. 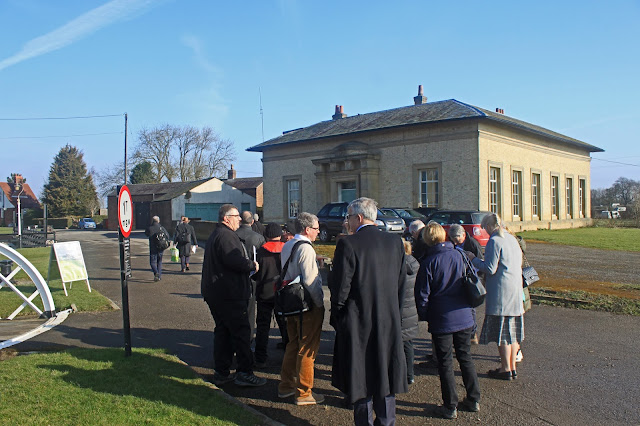 The first and smaller lock was built in the 1750's and a larger one capable of carrying 400 ton craft was built next to it in 1888. Between this time the Trustees of the Ouse Navigation built the imposing Banqueting House next door. This fine Greek revival building has been hotel, night club and guest house in its time but alas it is prone to flooding and occupies a very remote location. As a result it has been a  commercial failure and rumour has it that it has defaulted to the ownership of Nick Mason of pink Floyd who is looking to sell.

The lock island used to host a four story water mill which was demolished about 100 years ago. However, the old navigation buildings still stand and are being creatively redeveloped by volunteers who have transformed them to a visitor centre on a shoestring budget. The complex includes a forge, a workshop and offices. 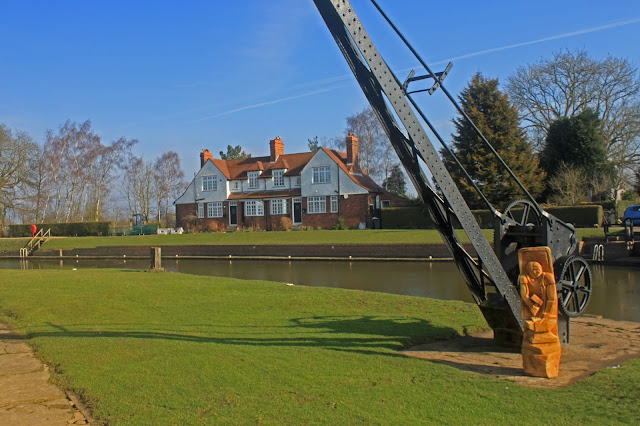 To date attention has focused on the workshop and forge which contain period machines and an interpretation boards. The offices are stripped out and restoration is ongoing.

Outside a nature  and heritage trail is being established funded by the 'Tesco Bags for help' scheme which includes six locally relevant totem poles created by a local chain saw artist. As it stands the site justifies a couple of hours plus, in good weather, a picnic on the open grass area. 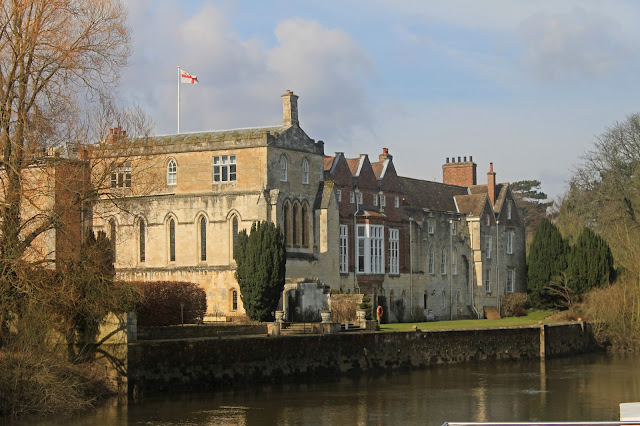 Perversely, this lock island is the only land owned by the Trust in the area so they are making what they can of it and it is great to see its potential being realised. 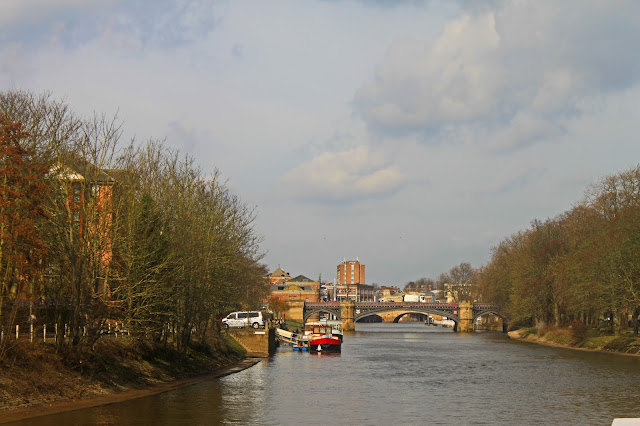 Email ThisBlogThis!Share to TwitterShare to FacebookShare to Pinterest
Labels: Ouse

Canal and River Trust's National Council meets once every six months and follows a pattern of one meeting taking place immediately after the Annual Public Meeting in September and the other in various locations around the country.

You may recall that my first March meeting took place at Liverpool Docks, last year was in Bath and this year we gathered in the Yorkshire Museum in York.

I have to admit that I find this roaming approach to the spring meeting very informative, even if it creates travel issues. The formal meetings run from 11.30 till 4.30 but on each occasion there is an optional site visit and thhis time the reward for showing up at 8.30 was a coach trip to Naburn Locks and a boat trip back to the meeting venue in Museum Gardens. Its surprising what you learn on these trips. Did you know that whilst CRT owns the river navigation of the Ouse through York, they own no land in the city and the Naburn Locks site is their closest bit of real estate? They are therefore, with much volunteer assistance, developing the flood prone lock island into something of a visitor attraction which is well worth a visit and how better to travel the six miles than by boat. Its good to see aspects of CRT in action as it "grounds" discussions. These informal site visits also offer an opportunity to have a chat with CRT staff, the Trustees and other council members which is a massive plus. I sometime think that my greatest influence on the Council is via the informal discussion opportunities it offers rather than formal questions raised "in session".

Given the numbers involved in these meetings they tend to be a succession of presentations and information dumps, designed to inform and offer some scope to challenge in question and answer sessions which follow each segment. However, time is limited and we have to crack on to keep to the timed agenda.

What follows is a precis of my notes, which are not formal minutes and are simply the things which struck me during the meeting and may well contain personal misunderstandings, errors or omissions. With those caveats in place here goes:


I think thats about it. I am sure I missed some issues but these were the stand out's from the event. Please give me feedback of issues you think should be considered / communicated.

Its probably fair to say that the boating and business issues are mostly addressed at working group meetings which happen two or three times a year than at these big National Council meetings.
Posted by Andy Tidy at 8:50 am 8 comments:

With our week on the slipway complete, Wand'ring bark was winched back into the murky waters of Hawne Basin, but not before the reinstatement of the weed hatch had been confirmed. That oversight would result in a quick submarine impersonation, and that would never do! 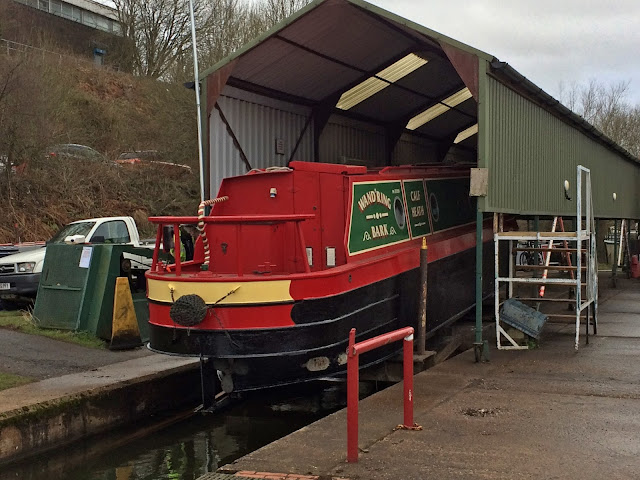 Back into the water

We followed a slow moving Hawne, the Coombswood Trust's workboat, though the Gosty Hill Tunnel. Their progress was hampered were by the Joey they were towing over to Wolverhampton for the BCN clean up weekend. In classic towing style they were trying to keep the unmanned Joey on a straight course using a length of chain dragged from the stern. The other time honored approach is a bucket on a rope. 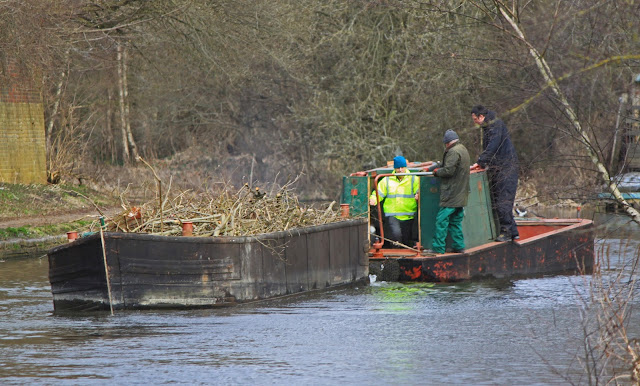 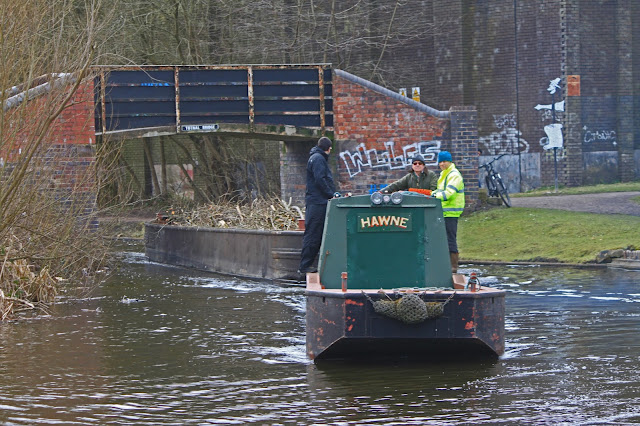 Free of our own butty we were fairly scooting along and were soon past them and were half way through the Netherton Tunnel before Hawne's very unsubtle Ford Transit engine bellowed into the western portal behind us - sending waves of noise and vibration all down the bore.

With Factory Locks closed till May we scooted round to Brades where I unwisely let myself drift to the offside and promptly picked up a bladeful of poly bags. A quick trip down the weed hatch was enough to clear the problem but it was soon apparent that the water temperature was little above freezing. Hmm, I muttered to myself, I really hope I don't pick up anything nasty today because I don't fancy having my hands in the water for long.

We met Rob from Hawne at Brades. He had jumped on a bus at the Tividale Aqueduct and arrived just in time to set the Staircase pair for us. 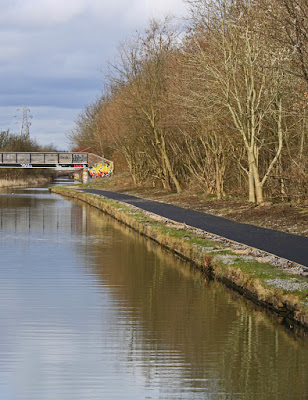 We pressed on through Tipton to Coseley where extensive towpath improvements were underway, work that went on fairly continuously Wednesfield on the Wyrley and Essington. The works near New Cross Hospital seem to be extensive, needing a double width pontoon which was anchored mid channel and barely left enough deep water to get by. Its the first time I have seen a wide beam on the BCN, even if it is made of is single narrow pontoon hinged in the middle. 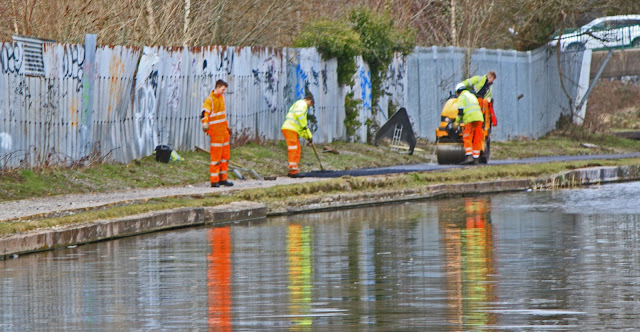 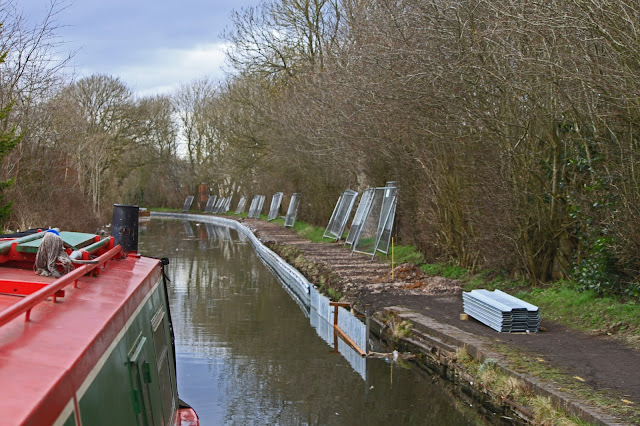 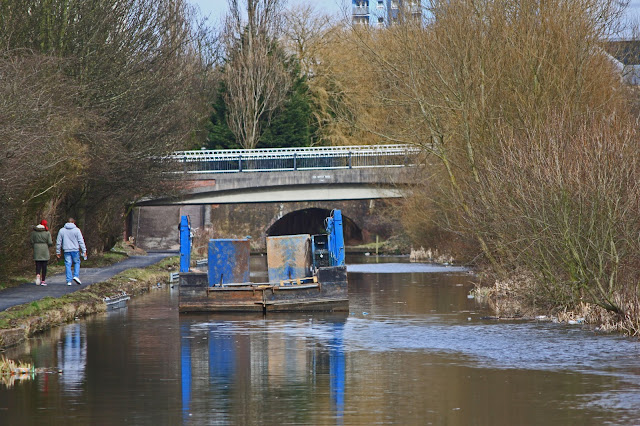 Works in the Wyrley and Essington at Wolverhampton

We made good progress till Short Heath where the debris started to get really bad. We weaved in and out of the obstacles but I guess it was inevitable that we would come a cropper in the end. Just as we approached Lane Head Bridge we snagged what we later found out was a double duvet. We poled ourselves to the visitor moorings and made a tentative foray down the weedhatch. Wow the water was cold! A bit of prodding revealed a nasty bundle round the prop and attempts to saw the stuffing off were spectacularly unsuccessful. However, I have never been defeated and have found that with patience most things can be removed. In this case we managed to haul a section through the weedhatch and so started to clear it out of the water. The stuffing was best removed by tearing small bits by hand whilst the cotton cover was best removed with a serrated knife. In the end we cleared in in about 45 mins which left just enough daylight to get to Sneyd Junction where we moored on the offside of a workboat on the water point. 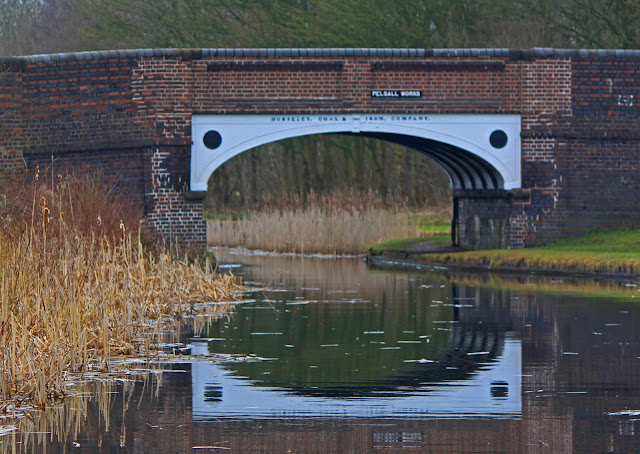 Having woken early I was up and away by 7.00am and by the time Dan emerged at 11.00 we were through Aldridge and just 40 minuted from our mooring at Longwood,

It was good to give the boat a pre season shake down and I identified a few issues which need to be addressed before we set of for our 2018 summer cruise in a few weeks. 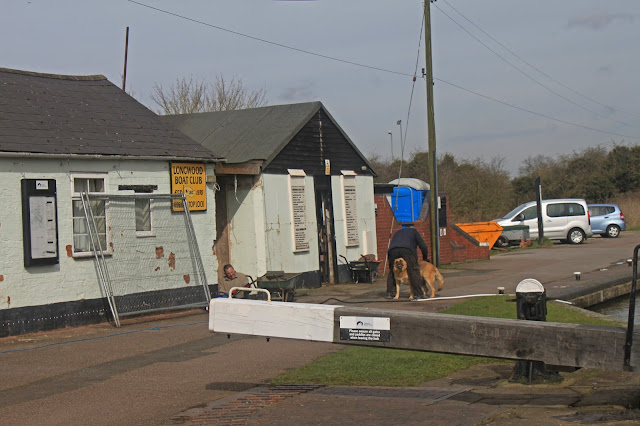 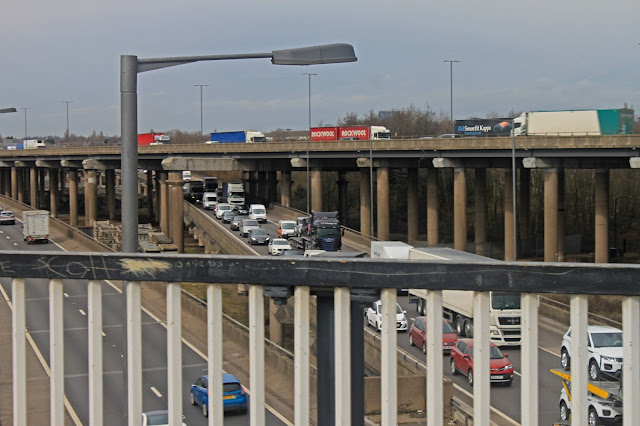 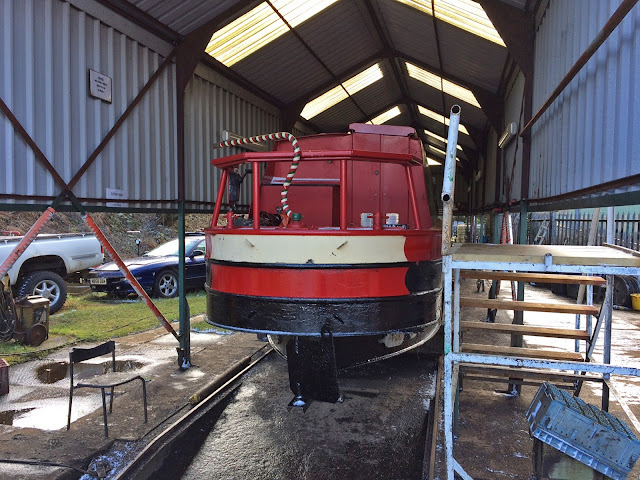 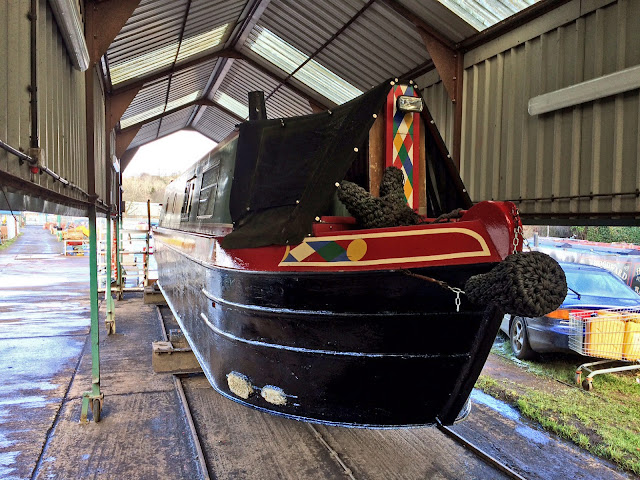 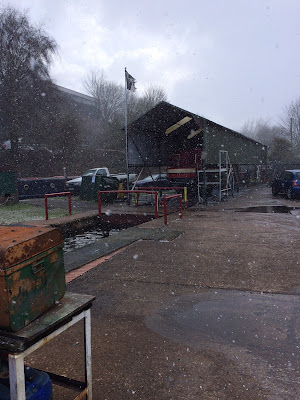 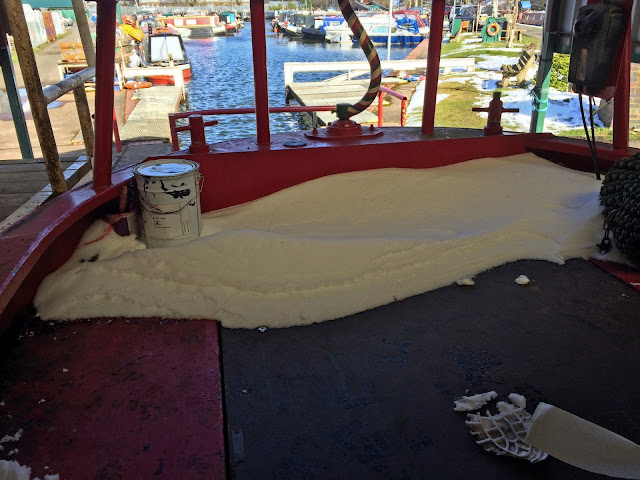 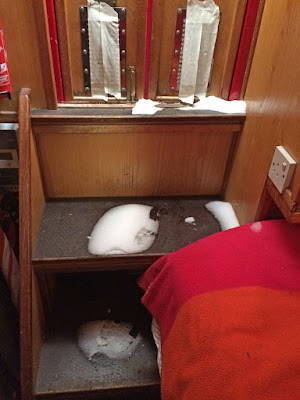