Lapworth in the rain

Lapworth in the rain
August 2015

Sorry, still no photos. Today my excuse is precipitation and cameras being uncomfortable bedfellows.

The forecast was for an improvement from 1.00pm but the absence of rain didn't really arrive till gone 4.00pm, by which time we were well down the Lapworth flight of locks.

And so we got soaked, with the rain veering from misty to hard and back again, penetrating our clothes and making the descent less that thrilling.

Most of the locks were in our favour but along the way we stocked up on Crab Apples, Cookers and some Damsons, but left the Blackberries for a dryer day. All the rain had an impact on the canal and the by washes soon became raging torrents, slewing the boats around and generally making control of the pair very difficult.

Helen undertook the steering duties whilst I sloshed up and down the locks, my normal youthful spring in my step evaporating after the first 10, followed by a heavy trudge with wet trousers clinging to my legs.

The stern gland is still running bone dry, which is a plus, but the studs / nuts in the Centreflex coupling are loosening themselves after 3 days running and I can see a work bench fix (or replacement) being needed this winter. For now its a case of keeping an eye on them and tightening periodically.

In the end we simply descended the flight and moored in the little arm between the Stratford and the Grand Union, indulging ourselves with a hearty meal in the Navigation Inn - washed down with a couple of points of rather excellent Purity IPA.

Tomorrow we return to the South Stratford and hopefully some better weather for our run into Shakespeare's town on Wednesday.
Posted by Andy Tidy at 8:48 pm No comments:

Off down the Stratford

Its August Bank Holiday Monday and here we are at Hockley Heath, two days into our summer trip..... and its chucking it down!

When towing The Jam Butty we are constantly asked where we are going and its amusing to say "Windmill End", a look of confusion crossing their faces as they think "isn't Windmill end on the BCN?.... but you are going south".

It is true that we are making for the Black Country Boating Festival, but that's not for two weeks so we are paying Stratford and Tewkesbury a visit along the way. With the summer fruit a bit late this year we should also be able to stock up on wild ingredients and come to the festival armed with some very fresh produce.

Day one was abandoned before we even started. The thing is that we are off to New York in a few weeks and will be returning in the Queen Mary 2, which dictates a level of sartorial elegance neither Helen or I can really achieve at present. So it was a case of load up the boat and then hit central Birmingham and give the credit card a good old work out.

From a boating perspective day two was more productive. The mile pound below Rushall Locks (why were they called "Moshes"?) has been fixed and we are back to normal water levels - ie shallow - and then onto the long slow Tame Valley. With the temperature at about 22 it was perfect boating weather and as you would predict, the northern BCN was heaving (not). In fact we travelled on the backwaters for seven hours before we saw another boat - its like having 40 miles of personal canal which is great.

The northern BCN canals are much cleaner these days and whilst we had to make half a dozen trips down the weed hatch they were all for its given purpose - to clear weed which does build up an late summer. Nothing nasty, not even many poly bags.

As we passed through Smethwick I got to wondering. When the old Brindley summit existed it was fed by Smethwick Great Reservoir, which was drained in the mid 1800's after Rotton Park Reservoir came on stream. My question is "where was it". My research suggests it was the site of today's Victoria Park but I am not sure. Answers in the comments box please.

A very pleasant day ended at Symphony Court where we moored on the private moorings and shared a few glasses of wine with Nick and Victoria.

As we move towards out summers aboard the boat phase in 2016, we are trying not to hurry and move as we fancy. It was therefore a 10.00am departure from central Birmingham, the butty being the focus of a great many photos, as usual. Then it was the two and a half hour pull out to Kings Norton Junction where we dropped off a jar of jam to the guys who live in the old junction house as a thank you for putting up with us during the recent festival.

Leaving the Worcester Birmingham and transferring to the North Stratford also meant we left most of the hire boats behind and for the next five hours no boats came up behind us. That's a real bonus because trying to facilitate an overtaking maneuver on a shallow, narrow waterway is a real challenge.

Just before we set off I decided to tackle the stern gland problem. It was repacked a couple of years ago but it had reached the maximum adjustment and water was coming in steadily - and the auto pump was kicking in every three hours of travel. I was fearing that new stern gear was needed but before going to that expense I decided to repack it myself using some thick gauge packing I had in reserve. I extracted the old packing with a curved bradawl tool I found in my grandfathers shoe repairing box and then discovered that the new square profile packing was too thick to get into the stuffing box. Undaunted, I compresses it a bit with a hammer and then pressed it home using the stuffing box adjuster plate to drive it home. All seemed ok till I ram the engine in gear and the stern gland warmed up!

I was therefore more than a bit nervous when we started off on our two week trip with a very uncertain stern gland. However, I forced plenty of grease into it and hoped for the best. The grease did the trick and it soon bedded in and guess what - two days of travel and not so much as a drop of water! I have even mopped out the drip box to check and so far it remains stubbornly dry!

And to here we sit, planning our New York itinerary, practicing our dance moves on the towpath (almost as funny as it was romantic) and waiting for the blinking rain to stop. Hopefully we will be off down the Lapworth Flight this afternoon and arrive in Stratford on Wednesday.

Sorry, no photos so far. Will do better next time!

Happy bank holiday one and all.
Posted by Andy Tidy at 12:59 pm 4 comments:

Its the first weekend in August so it must be the Blisworth Canal Festival, an event which has entered its seventh year and this time it was bigger and better than ever before. 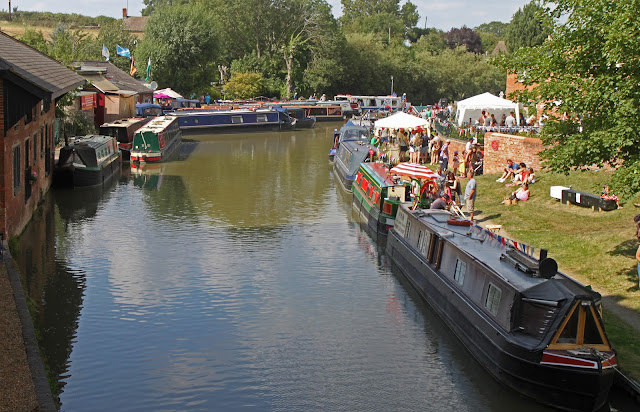 Last year the Saturday was good but the Sunday welcomed the entrails of a tropical storm which washed the event out completely. This year the weather was kinder to a fault, with the thermometer hovering in the high 20's and barely a breath of wind to rustle the Gazebo. 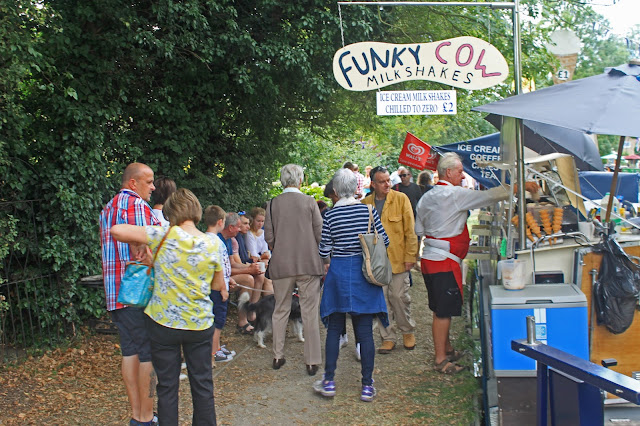 We were invited to spend Friday night with Sandra and Barry (Homebrew Boat) so we rocked up in late afternoon and were just setting up the stall when Areandare slid through the bridge. The evening saw the sampling of wine and beer and the conclusion of a very satisfactory game of Six handed Rummy (a game of great skill which saw the girls roundly trounced and me stalking Barry only to steal the lead in the last round). 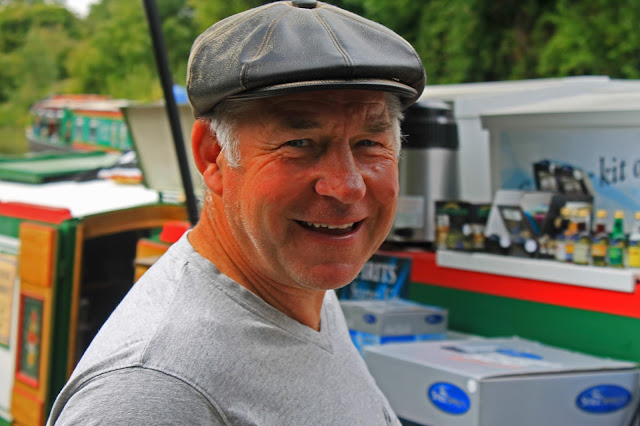 This event grows and grown and every year we seem to see the fields given over to car parks grow in number. With good weather forecast for the whole weekend the crowds turned out in force - an estimated 23,000 on day one only to be eclipsed on day two when the overall weekend total approached 60,000! 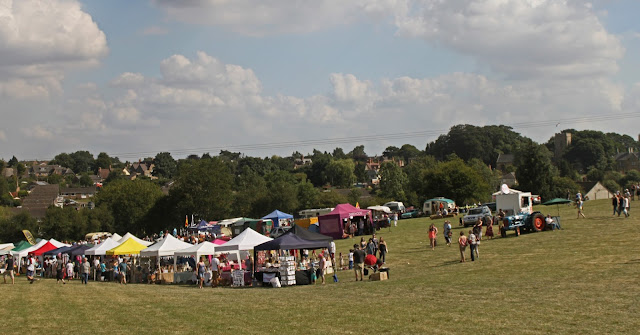 From a trading point of view Saturday is normally the busy day and Sunday being more relaxed, but in this case the Saturday was just too hot and the huge crowds milled around listlessly more interested on shade, water and ice cream than buying stuff from boats. Hey ho, Sunday was fresher and more inspirational for the buying public many of whom are repeat customers who beat a path to our stall each year for their jammy fix. 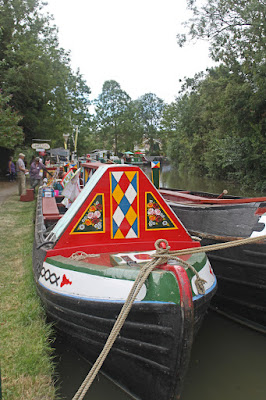 All in all this is an extraordinary event which just grows and grows, a village fete on steroids which in the realms of canal festivals is in some ways unique. We don't want to get locked into a fixed cycle of events, but come August 2016 we will be back.
Posted by Andy Tidy at 9:14 pm No comments: