The IWA's Festival of Water in Pelsall was never in my 2016 plan, not because I had anything against it but had things panned out as expected we would have been in London at the time. 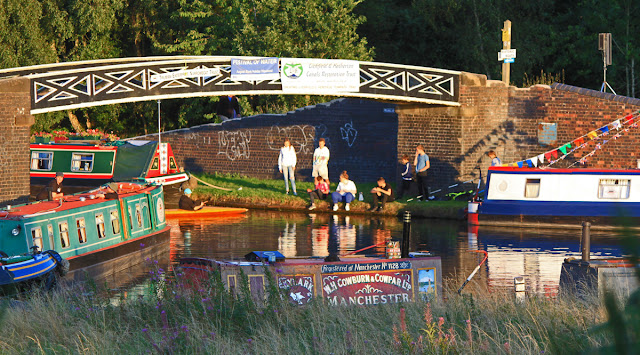 Chilling at the IWA Festival of Water, Pelall 2016

However, 2016 really wasn't to be as far as cruising is concerned. Helen's treatment has kept us close to home which has meant that the preserve business has had to be scaled back - a lot. Our challenge is that whilst preserves by definition will keep - they don't keep indefinitely and certainly not till the 2017 cruising season. 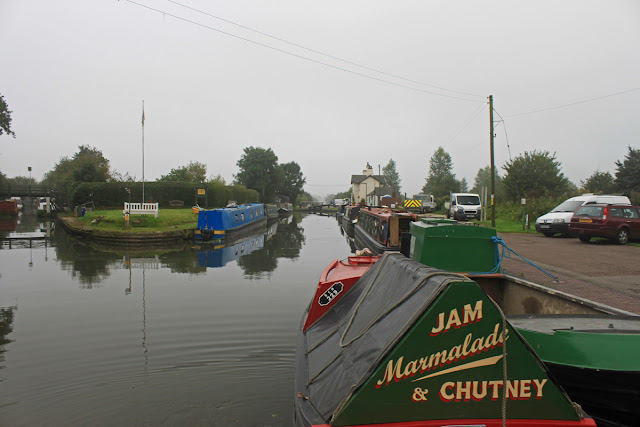 We therefore decided to keep Wild Side ticking over but with Helen doing no cooking and no selling - which meant that I was trained in the mysteries of preserve making and every opportunity would be taken to attend local boat gatherings where the chemo impacts allow. These sales opportunities should be enough to turn the stock over and set us up for next year. 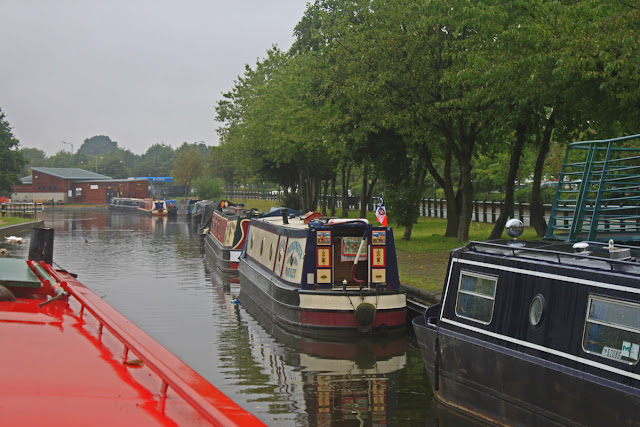 Choc a bloc at Brownhills

The IWA Festival of Water therefore came as a godsend - a major canal festival a mere eight or nine miles from our home moorings. The cost for a trade boat was a bit steep at £90 including VAT, but it was really too good an opportunity to miss so I signed in and hoped for the best. As it turned out the Cheese Boat (northern) was in attendance as was Paul from Waterways Routes and T&S Boat Handling so there were just the four of us. 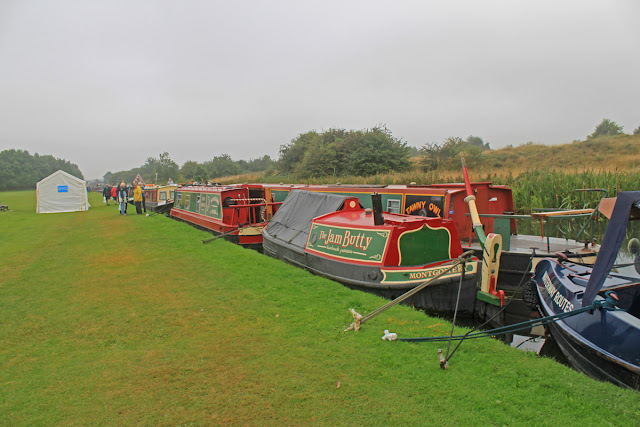 I figured it wasn't a huge catchment area and sales would be gentle enough to trade alone, so I set off on Thursday with a good quantity of preserves but more than a little apprehension. Can I pull it off alone? I wasn't too worried about company because I know so many attendees, but I have never tackled even a two day event by myself and to date my limit was the one day even at Brownhills. 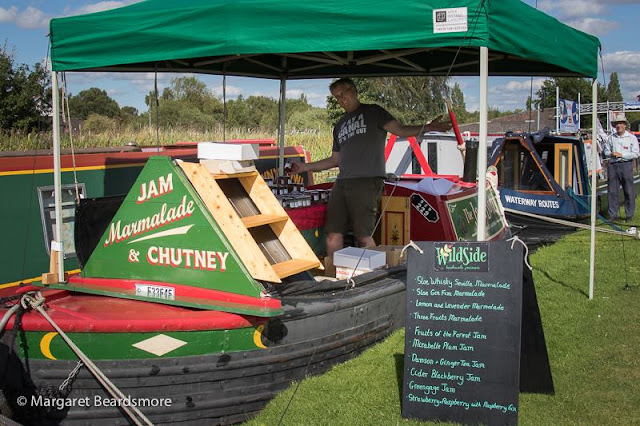 Setting up the butty, captured by Margaret Beardsmore.

The weather did its worst on the way over but the Friday dawned clear and bright and made setting up a delight. For the two of us a set up takes a couple of hours but on my own people kept stopping by for a chat and the set up stretched from 10.00am till 4.00pm. On the upside, the visitors kept buying product and by the end of the day my entrance fee has been covered! The evening was rounded off with faggots and chips washed down with real ale - which provided sustenance to enter the Martin Ludgate quiz. We (myself, the Tawny Owlers and a couple of WRGies) emerged equal first before losing the tie break. Our combined encyclopedic knowledge of the BCN came in handy... 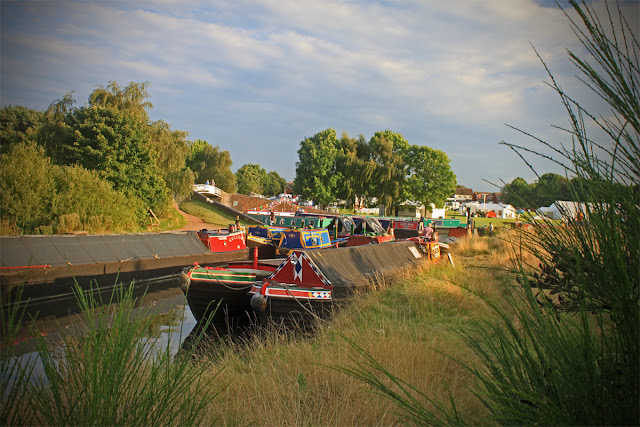 The next three days passed in a blur. Saturday ended early at 4.00pm beneath a downpour of rain but Sunday and Monday were ideal and the crowds flocked into the site and many beat their way to The Jam Butty for a sticky fix.. 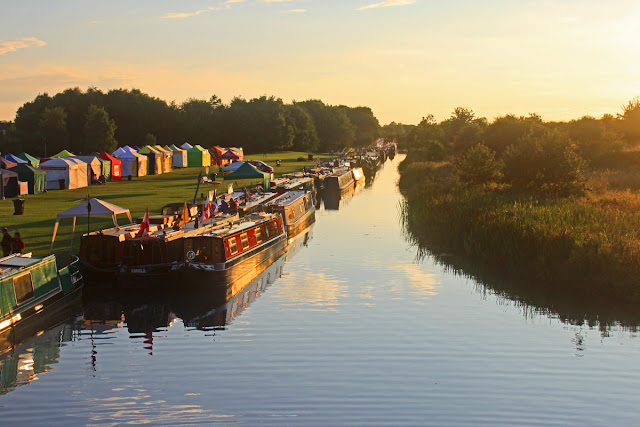 Sunset over the festival site with the crowds gone home

I was rarely without customers and the preserves flew out at an alarming rate. Fortunately kindly friends kept me supplied with tea and beer and periodically someone would mind the stall whilst I attended to the other end of the process.

I have to admit that I saw virtually nothing of the event beyond the horizon offered from the deck of The Jam Butty, but did manage to attend the 8.30 communion service on Sunday which was held in the main tent and officiated by a couple of the local clergy. 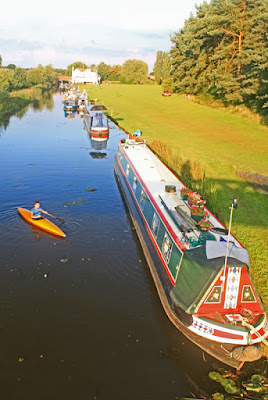 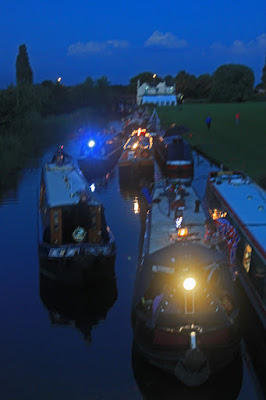 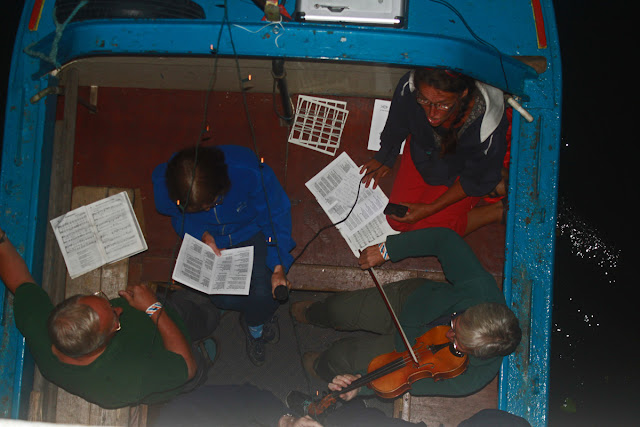 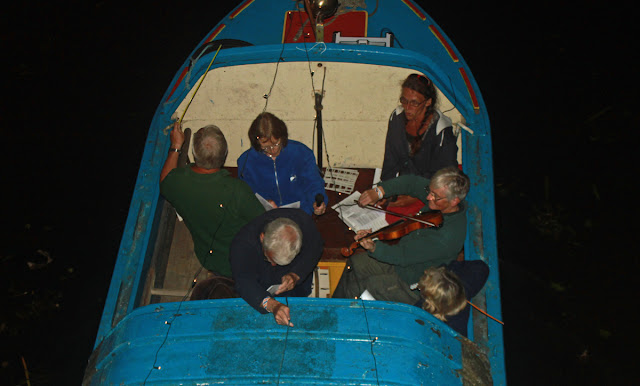 I did go exploring on Sunday evening and emerged from Pelsall Common with two huge bags full of cooking apples which stew down very nicely. The evening was rounded on with a very effective illuminated boat display. The only fly in the ointment was that Kew, at 71ft, couldn't wind in the Lord Hays Arm and had to carry on for 2 hours to turn at Berchills Junction in Walsall the next day. 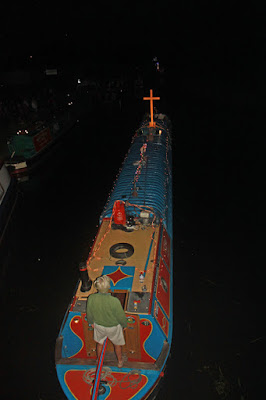 And so the weekend concluded with the coffers much improved but most of the reserve stock sold to an eager public.

All in all an excellent August Bank Holiday's trading which was followed by a slow four hour tow back to Longwood. The underwater reeds had been trimmed by the many propellers but the resulting floating clumps had turned some elements of the Daw End into the Sargasso Sea.