Jeff's Birthday Bash - and back again

After all the toxic waste excitement of yesterday you would expect a quieter return journey wouldn't you? Well, fact can be stranger than fantasy so here is the remainder of this comic episode:
After a 9.00 am start we soon passed the site of yesterday's emergency bailout, finding the autumnal air fortified with a very distinctive bouquet, not entirely pleasant I have to admit. It's a good job the spot was very remote and away from any moorings! 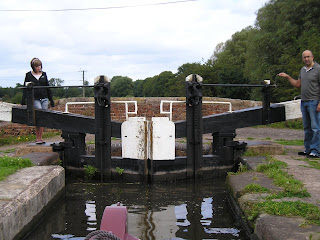 On our return to Penkridge who should be wandering around the lock? None other than yesterday's drunk - who had clearly invested his time and money topping up his inebriation in the local pub. Drunks seem to fall into two camps, they are either dangerously aggressive or they greet you as a long lost best friend. This chap was of the latter persuasion and he enthusiastically peered down into the lock chamber and asked how our trip had gone.
Given yesterday's final comment, I had to reply: "You know you were dead right, s**t does happen," and proceeded to tell the tale. I knew that engaging in this sort of banter carried risks but I didn't see the next one coming. "Can I ask you a favour please? - I need to get my boat up to Gailey and I was wondering if you could give me a tow?". In that moment I couldn't think of a good reason to say no, so I said yes and tied him onto the stern dollies. His little plastic cruiser was, of course, entirely without a licence, a mooring permit or valid BSC - but there, no one is perfect! 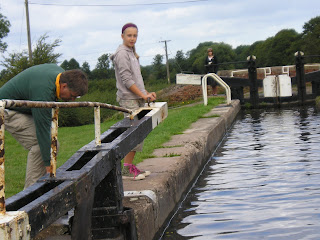 I kept well to the front on the locks to avoid crushing my companion, and all went well till we approached Shutt Hill. My "passenger" decided to jump off his boat as we approached the bank, but he failed to allow for the reaction of his craft, which skidded back away from him, leaving him suspended in mid air, rather like Wylie Cyotie when he realises he has run off the edge of a cliff. As if in slow motion, I watched him plunge beneath the murky waters and then start vainly scrabbling at the steel piled bank, trying to get out. The water was deep and cold, he was heavily dressed and drunk and the bank was sheer and high - all of which made an unassisted exit nigh on impossible. I genuinely feared the chap would drown himself so I abandoned the boat (again) and dashed back, hauling him out by his belt. He was too shocked to say much but from his moans of dispair it appeared that he had been wearing his best trousers, which were now soaked and ingrained with silt.
Our passenger disappeared back into his boat to change and didn't reappear till we cleared Gailey Top Lock, emerging as we refilled our water tank to replace the water used in yesterdays debacle. I figured that this trip couldn't have any more incident but no, there was one final twist in the tale. Jeff's best friend, Matt, is a lively lad and never walks when he can run. I had reminded him at regular intervals to slow down but what do I know? In the process of filling the water tank I has sluiced down the side beneath the chimney, rinsing off the sticky tar which oozes out. The result was a slippery patch which Matt hit at full speed and, for the second time in an hour, I watched an episode of Wylie Cyotie. This time the unpowered flight attempt ended with a small blond head bobbing down the side of the boat, spectacles still on his nose all glistening wet with water. Another emergency stop, followed by a rapid strip down and shower to quell the shivering. By this time I had had enough of the passenger (I didn't catch his name but I suspect it was Jonah) so I dropped him off on the visitor moorings and legged it back to Calf Heath as fast as I could. 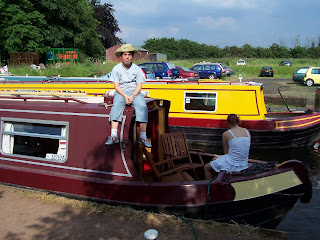 As you can imagine, the three lads found the events surrounding the "toxic waste" weekend hilarious, with the component parts growing in dramatic content with each retelling!.
Posted by Andy Tidy at 5:45 pm No comments: 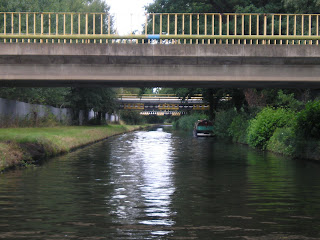 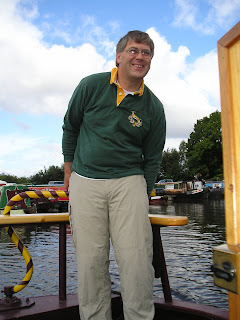 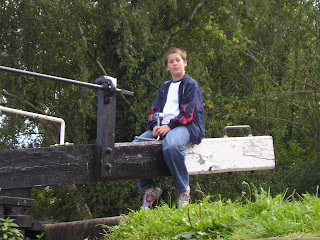 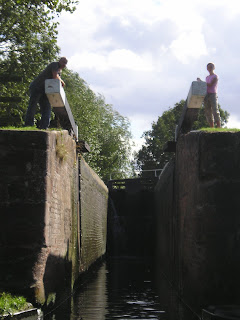 Apart from a rather soggy floor and damp atmosphere the remainder of the day passed uneventfully.
Posted by Andy Tidy at 9:59 pm No comments: