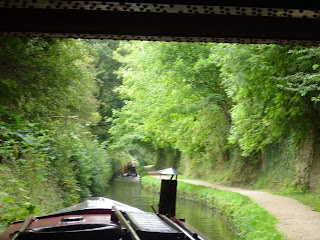 Festivals are funny things. I have attended all sorts of gatherings in all sorts of locations and I am always struck by the transformation when the event is over. How something that seemed so significant can disappear like the morning dew, leaving so few traces behind

On this occasion I am thinking of the IWA National Festival which took place last weekend at Pendeford Park. I had another unexpected day to myself and rather than spend it doing the sensible thing (painting the front of the house), I decided to take a solitary trip through Autherley to the winding point beyond Wolverhampton Boat Club, have lunch and then return.

It was odd to pass the site of the festival and see so little evidence of its passing. It has all seemed to busy, so permanent at the time and all that was left were some muddy patches on the grass and a line of new mooring rings along the newly trimmed offside. It got me thinking (being alone I had plenty of time to ponder). What is the legacy of the festival, or any other gathering of that sort? It has to be more that the muddy footprint in the park, which will fade within a month, and also more than a trimmed bank, which nature will reclaim within a year or so. 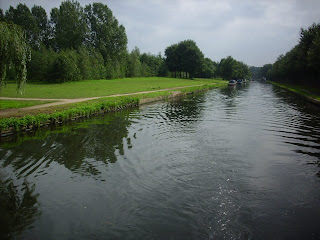 No, I guess that the legacy will be in the minds and hearts of the attendees. Relationships which have been built and minds which have been broadened will have a far more profound impact than the insubstantial marks left on the ground. There are little or no physical remains of Jesus, but look at the impact he worked through the minds of his twelve disciples. The jamboree may have come to an end but the work of this group of waterways enthusiasts rolls on, gathering momentum with each passing year. 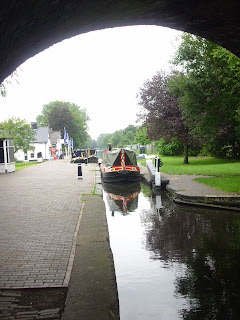 On a more mundane level, the day was warm and dry but not very sunny. There were very few boats moving and Autherley was back to its normal quiet self. Napton Narrowboats being cleaned ready for new holidaymakers and Viking Afloat crews making a last dash to get back to Gailey on time.

Whilst the legacy of a trimmed bank may be a transient thing, it was lovely to see Pendeford Park reconnected to the canal, with its areas of grass sweeping down to the water. It was also good to see the moorings so recently vacated by festival boats being used by local boaters. 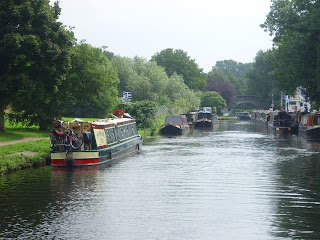 Although it is only the end of August, summer has nearly gone. The leaves on the trees lining the canal are starting to turn and some craft are already being mothballed for the winter. For Wand'ring Bark there is still quite a bit of season left with a couple of weekend fishing trips on the calendar, as well as the end of season solo run, which will probably be a return to market Drayton. 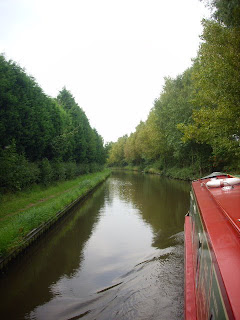 The 2008 Inland Waterways Association (IWA) National Festival was in our backyard this year, billing itself as "The Black Country Festival" and located for the first time in Pendeford Park alongside Autherley Junction, where the Staffs and Worcester / Shropshire Union canals meet.

We had planned a family visit on the Sunday but a mutinous crew and threatening storm clouds undermined the idea. However, Bank Holiday Monday found the Captain with an unexpected day of solitary shore leave. Having spent the morning fixing a failed bilge pump on Wand'ring Bark, the sun came out and I made a spur of the moment decision to make a pilgrimage to the Festival.

Whilst I had travelled through the junction dozens of time on the water I had absolutely no idea how to find it by road and has to resort to my trusty Birmingham A-Z. (GPS hasn't featured on Captain Ahan's radar just yet). I found myself directed to a free park and ride service form the Birmingham Midshires base on Pendeford Business Park and was quickly and painlessly moved to the showground - an impressive start.

As this was my first "National" I didn't really know what to expect. The crew of the Robber Button had visited on Saturday and warned of excessive mud, but the warm winds had dried the site considerably. My benchmark was the 2007 Crick boat show and it was pleasing to find that whilst boat sales and hardware formed an element, the main focus was on the people aspects of the waterways. By this I mean that a broad spectrum of waterway activities were represented, all the way from Cooking demonstrations to a stand explaining the work of the Boaters Christian Fellowship (BCF) whose badges adorn so many portholes. In addition there were stands and displays for many waterway associations and interest groups around the country. 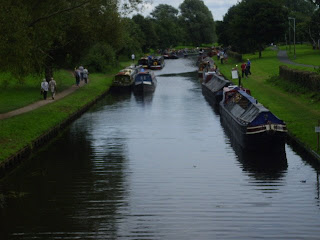 I was particularly interested in the work of the Birmingham Canal Navigation Society (BCNS) and the Lichfield and Hatherton Canal Resroration Trust who are working on projects in our immediate area. I was made particularly welcome on the L&H stand where my wallet was opened to support their raffle and, having expressed more than a passing interest in their work was quickly enrolled as a member for the princely sum of £10. Much to my surprise I later received a call from Bob Williams, the Chairman to say that as I was the 2000th member I have been awarded free lifetime membership, complete with publicity shots for their forthcoming magazine! They graciously offered me my £10 back but I declined, as my aim was to give something to them rather than visa versa. I have a feeling that my relationship with this particular body will deepen over time and my free life membership could cost me dear.... 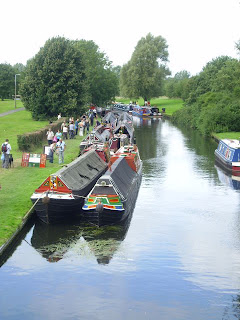 As for the rest of the show, I enjoyed the two hours I had available and the event would have sustained my interest for much longer if I had the time. I made a point of wandering down the towpath to have a good look at the historic boat display which was really interesting. This featured about 25 ex working boats in all states of repair. My favourites had to be the steamer, President with Kildaire in tow. I regularly encounter these boats at the Black Country Living Museum but it was great to see her in steam complete with an enthusiastic crew, all done up in character.

My lasting image will be the hundreds of boats at Autherley Junction, a sight I will probably never see again. I am more used to seeing this stretch on a cold and blustery October day with sleet slicing across the cut and not another boat in sight.

Well done IWA. A cracking festival and you got lucky with the weather this year!
Posted by Andy Tidy at 6:03 am No comments:

Email ThisBlogThis!Share to TwitterShare to FacebookShare to Pinterest
Labels: Lichfield and Hatherton Canal

Friday 1st August 2008
Yarningale Common to Stratford
Stratford Canal
9 Hours
10 Miles
23 Locks
Life in the slow lane
That's the story of the Southern Stratford. It was true when I last visited in in the 70's and its still true. This pace has little to do with channel depth, it isn't deep - but its no worse than the Peak Forest. Its the locks, not the number but the speed of fill and empty. All the paddles are minute and there is only ever one at each end resulting in 7 to 8 min's per lock, plus gate opening and shutting time which in itself can take a while, what with big heavy single bottom gates being the norm. It all adds up over the course of a day!
Speed of progress apart, the canal is very pretty and unless you working to a deadline, there are plenty of reasons to take your time and enjoy the view. 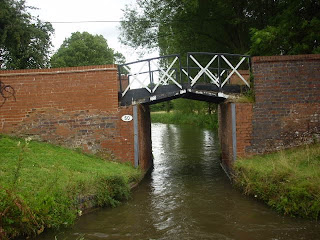 The mooring lived up to its promise and we quickly reached the unexpectedly impressive Yarningale Aqueduct and comprises a short iron trough leading directly into lock 34. If you are willing to scramble down the bank you can get an unusual view of your boat entering or exiting the chamber. 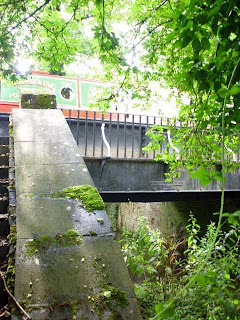 From here to Preston Bagot BW works were much in evidence, repairing the bywashes constructed as part of the 1960's restoration and now showing signs of age. Facilities are few and far between in this area so we took advantage of the services at the Woolton Wawen Anglo Welsh base, who specialise in a running pump outs whilst the boat hovers on the aqueduct. 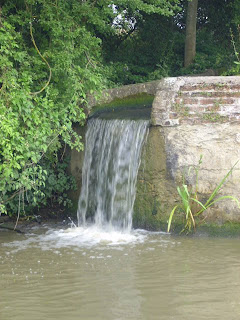 With a number of hire bases on this popular canal things got a bit bust and a traffic jam was encountered at the isolated lock on the 7 mile pound. 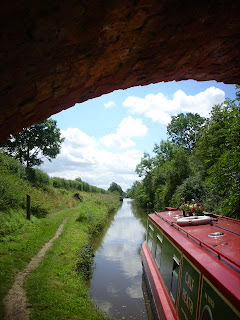 This lock was followed by the superb Edstone Aqueduct, a mini Pontcysyllte with an iron trough and no guard rail on the offside. 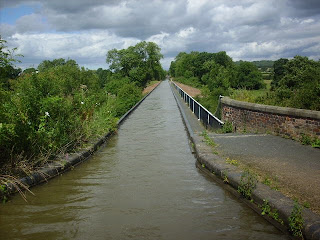 The final three miles to Stratford contain a sting in the tail in the form of a further 16 locks, all with single paddles. They run in a 3-5-3 sequence to the A46 and then another 5 beyond dropping the canal into the back end of Stratford under a series of bridges low enough to prune the flowers which sit atop the cabin roof. 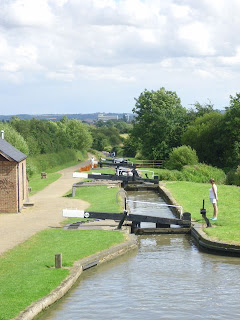 The main basin sits alongside the iconic RSC theatre but at present it is a mere shell as it undergoes a complete rebuild. Stratford Council have quire reasonably taken this opportunity to rework the public gardens which surround the basin and the whole area id therefore a building site. Even the wide lock down onto the Avon is rendered inaccessible from the land, making its operation rather tricky. 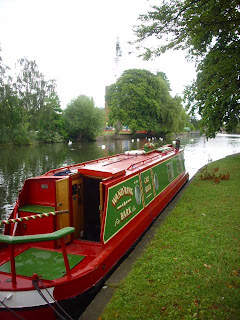 Journeys end for this trip was on the Avon, immediately above the chain ferry and opposite the temporary Courtyard Theatre. Belle made a hopeful attempt to secure a return ticket but the appeal of Jean Luc Picard and Dr Who was clearly enticing and demand far exceeded supply. 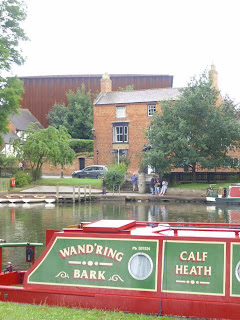 The Capt and Tilly wandered into town at sunset and obtained the last two portions of fish and chips which were eaten overlooking the basin accompanied by about 100 bikers our for an evening ride.
Time constraints precluded further exploration on this trip and Wand'ring Bark was handed over to Martin and Adam, who returned it to Calf Heath via the Avon, Severn and Staffs and Worcester Canal over the following 7 days.