Tipton to Walsall Day 2
The day dawned clear and bright, but with an unseasonable nip in the northerly wind. From the shelter of the museum moorings we made our way down the winding Old Main Line past tracts of urban redevelopment and over seas of lily pads growing out of crystal clear waters. An hours’ travel took us through Oldbury and under the crumbling supports of the M5 motorway. 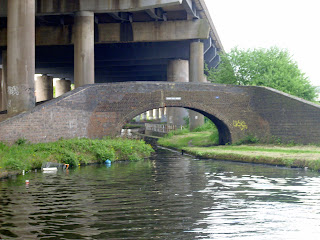 This structure is only 40 years old, ago but already it is on intensive life support, with its crumbling concrete splinted up with steel frameworks and studded with sensors to monitor its remorseless decay. By contrast, the virtually unused 250 year old canal snakes its way under the bustle of the major artery with an air of quiet confidence that it will outlast this brash newcomer which has quite literally, sought to overshadow it. 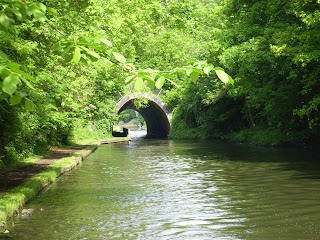 On this occasion we decided to continue on the Old Main Line to Smethwick, passing through the Summit Tunnel, a modern concrete tube, and then right over the gothic iron aqueduct to reach the Engine Arm, an old feeder from Rotton Park Reservoir. Having crossed over the New Main Line boaters are obliged to make an impossibly tight 90 degree turn to the left. The guide books will tell you that this half mile arm is a one way trip necessitating a reverse out. In fact the end of this end of the arm has been developed into a residential mooring area, complete with a winding hole and a full range of services (even a DIY pump out!) This obscure arm turned out to be the gem of the trip. 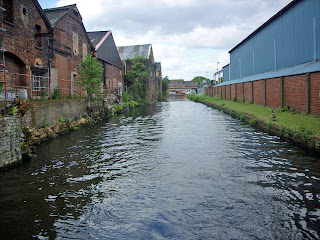 The route is lined with factories and is a real slice of the “old BCN” with its pungent smells of grinding accompanied by the screech of metal cutting. The residential moorers are justly proud of this spot and encourage use of the one visitor mooring within the winding hole. Our return to the Old Main Line resulted on the worst weed hatch visit of the trip – a sheet of carpet attached itself firmly to the prop, stopping the engine dead and took about 30 minutes to clear. When we were finally free of the intractable Axminster we dropped down the badly worn Smethwick Locks to the New Main line, doubling back under the Engine Arm. Telford’s New Main Line strikes out in it’s deep cutting, taking a no nonsense approach to Tipton. After a short tunnel, a twin of that seen up on the Old Main Line, the spectacular Galton Bridge rises magnificently above your head before you pass beneath the understated Stewart Aqueduct and onto Pudding Green Junction. 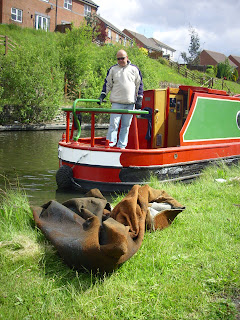 At this point we entered the remnant of the Wednesbury Old Canal and made a return to the remaindered canals we left last year. The difference was apparent with progress slowed to a crawl and the of bottom rising sharply leaving only a couple of feet of sludgy water, which held hundreds of poly bags in suspension. Noxious bubbles of methane rose around us and we hade gone barely half a mile when the engine shuddered to a halt. This time the prop has snagged a plastic road cone, which managed to lock itself firmly onto two blades. Thick plastic was new territory but after trying the various cutting implements at my disposal, a sharp Stanley Knife did the trick. 15 minutes of wrestling in black water were rewarded initially with the top 10 inches of the cone and then, piece by piece, the rest of the offending article emerged. The Wednesbury Old Canal appears very short, so short that some maps make no mention of it at all and suggest that the Walsall Canal starts at Pudding Green. In fact, the canal continued up what is now known as the Swan Arm and then beyond the busy road into the abandoned Ridgacre Branch. A labyrinth of side arms and basins existed beyond the current head of navigation, some of which can still be seen complete with roving bridges in the ground of the pub opposite. 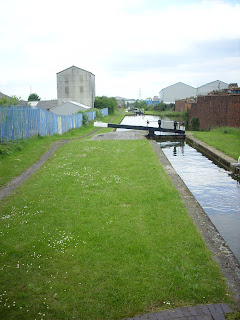 Ryders Green Junction marks the start of the Walsall Canal and is the gateway to the northern canal network. You immediately encounter the Ryders Green locks, which are a particular favourite of Wand’ring Bark. This well maintained flight of eight with their, massive single bottom gates, were all freshly painted and greased, but with less vegetation than last year. 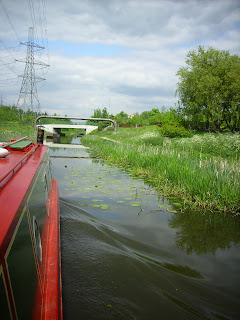 Our enthusiasm for the Walsall Canal does however have its limitations and that limit is Tame Valley Junction. Up till this point the remains of several heavily locked routes up to Tipton and Bradley sprouted off the main canal, waterways with names like Toll End, Gospel Oak and Ocker Hill. Spotting the likely exit points make good sport. However, these distractions are soon forgotten as the surroundings take a turn for the worse. Some efforts have been made to improve the waterfront at Wednesbury, but the regeneration works are steadily reverting to their earlier state of decay, with anything flammable being reduced to ashes and boaters being offered the opportunity to play a new game of “guess the make of the burnt out car”! It is sad to see the decline of a waterfront complete with strategically placed bollards, which are unlikely to feel the touch of a boaters mooring rope. 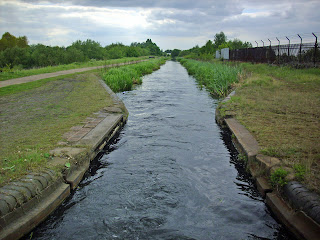 Beyond this point the canal seems to have given up all hope, creeping through Darlaston and Pleck, all the time narrowing to the status of a week fringed ditch as it rubs shoulders with the Black Country Spine Road, remaining just about navigable as it passes the southern end of the Bentley Canal and on under the M6. Weeds are once again replaced by the urban detritus of until finally, Walsall Town Arm appears as something of a relief with its renovated basin complete with art gallery and pubs. This short arm has a tendency to be covered with floating duckweed, which has been known to lure unsuspecting drivers into its murky depths, thinking it a short cut across a patch of grass.
Walsall Locks, like Ryders Green, are well maintained and although you can’t see the entire flight at a glance, the scarcity of traffic means you can safely walk on ahead and set all the locks in your favour with minimal risk of inconveniencing other boaters. Beyond Walsall Top Lock lies Burchill Junction with the Wyrley and Essington Canal. With Harden and Goscote to the right and Leamore to the left it is hardly an inspiring choice. Both areas hold dangers for passing boaters and are best navigated during school hours. Our schedule dictated a passage at 5.00pm but we were fortunate, whilst we were spied by a group of children who made chase, we managed to round the next bend before they reached us! Our self-congratulations were short lived as we struck the remains of a collapsed wall and knocked the rudder clear out of the skeg. Try as we might, we couldn’t relocate it so we limped on for the last mile or so to Sneyd Wharf where brute force and luck combined to successfully reseat it. 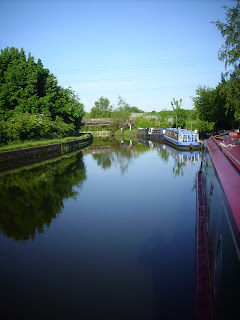 Sneyd Wharf offers one of the few safe moorings in the area and, although essentially a residential site, the boaters who live there were very welcoming suggested that we stay on the water point overnight. Although you can see lorries scurrying up and down the M6 from this location, the noise is modest and is drowned out by the cooing of the many pigeons, which live in the roof of the BW buildings. We fell asleep to the sounds of the birds and reflected on the quality of this oasis in the midst of a troubled area. Night fell and we slept peacefully.
Posted by Andy Tidy at 9:45 pm