A Boy off the Bank

Book Review
A Boy off the Bank by Geoffrey Lewis 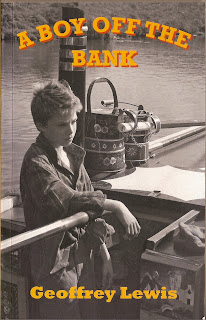 I encountered Geoffrey in the depths of the BCNS tent at the Pendeford rally in August and, on a whim, agreed to buy the above book - the first of a trilogy. I have his signature inside the front cover as proof if necessary.

Other pressing reading material pushed BotB to the bottom of the pile but a sudden burst of man flu left me with time on my hands. This time, coupled with a limited amount of reading material within arms length caused me to alight on the book in question.

Without spoiling any of the plot, its a heartwarming tale of a lost and abandoned boy who finds a new life in the arms of the extended canal family. The book covers his rescue, his early days on the narrowboats and on into young manhood up and down the Grand Union. A full quota of life events is thrown at our young hero including births, marriages and death to all the elements are there for a gripping read.

But, and you knew there was a but coming, it wasn't the page turner it could have been. Geoffrey clearly wanted to be as authentic and accurate as possible, as is evident from his acknowledgements. The sad thing is that the literary maxim "never let the facts stand in the way of a good story" are very true and some artistic license is needed to sweeten the pie.

The book provided a thoughtful and well researched insight into life on the cut during the war years. However, it reads as a storyteller trying to stitch together a number of disparate facts ferreted out by a researcher. A prime example of this was a red herring story line which dragged the characters down the Birmingham Worcester Canal as far as Tardebigge Top Lock, just to have a chance encounter with Messrs Rolt and Aickman. As I said, a slave to historical accuracy.

The end result is an excellently executed backdrop but an unconvincing storyline. The decision to write the narrative in colloquial Brummie meets Boaters speak was a challenge, even for a longtime resident of the midlands fair city.

So am I dissing the book? Well yes, and no. I don't think it has the legs to become one of the great sagas but it did add some historically accurate colour to the Brentford / Birmingham route with which I am so familiar.