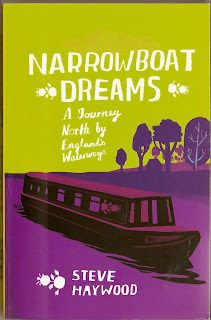 I have been aware of Steve for some time as a regular reader of Canal Boat, who recently covered his passage through the Standedge Tunnel in a brief extract. The snippet was sufficiently amusing that the book was promptly added to my Christmas Present list.

There the matter would probably have remained (my Christmas Lists are rarely actioned) save for a chance visit by Belle to the Stratford Oxfam shop. There on the shelves lurked a good quality version for the princely sum on £2.49 (face price £7.99) and, never one to miss a bargain, it was snapped up and returned to my fevered grasp as a prize possession and a gesture of her undying love.

I love boatey books. None are too nerdy to be cast aside and I was immediately all over this one. A book I wanted to read, offered up for absolutely nothing - excellent.

Steve decides to try and identify where South ends and North starts, I believe Winnie the Poo did something similar in search of the North Pole. In this case his destination is a single handed circular tour of the recently opened Huddersfield Narrow and Rochdale canals, exploring this ring shortly after their reopening.

The early sections therefore introduce us to his boating pedigree and take us with him as he sails North from Banbury, carried along on a sea of reflections of canalling in days gone bye. This was very well done and was much enjoyed. I particularly liked his explanation for his aversion to the Tidal Trent. Normanton holds dark spectres for many of us.

By the time he reaches Manchester he is clearly in "The North" and encounters the usual native hospitality associated with the Ashton Flight. As the book moves onto the Huddersfield Canal and Steve enters new territory, he assumes a more traditional travelogue tone describing events in an A to B to C linear style, pausing for a while half way along to attend to a family crisis. On this return to NB Justice he hurries round the remaining portions of the circuit in the failing autumnal weather, ending up on the Peak Forest Canal which became his base for a number of years.

So was this an item to bring to the book group? Well possibly if they are all as canal mad as me. Mind you, I didn't try it on Belle or her bookey friends cos it wouldn't hit their spot. Anyway, one of them christened me Captain Ahab so I don't see why I should share a gem with her!

Yes, its a lovely book but certainly one of two halves. Its not end to end action but neither is it a no score draw.

I have recently completed the South Pennine Ring, inspired by this book. I am therefore re reading it and now realise that a first read merely provided an overview of the trip, sort of whetting ones appetite. Having actually seen it, done it and won the tee shirt the book now comes to life. I suspect it will justify another blog entry when the accounts of our travels are complete.