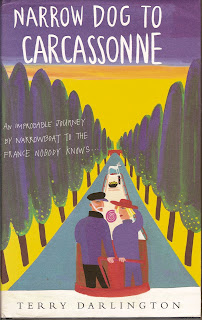 Terry and Monica Darlington's escapades with their whippet Jim in nb Phyllis May are the stuff of legend. Two pensioners with a lust for life and an unhealthy disregard for health and safety sail the Chanel bound for Carcassonne in the South of France. The TV footage of their entry into Calais in the face of an outbound Sea Cat probably delivered enough publicity to sell 30,000 copies.

If you sometimes wish that the UK's inland waterways went a bit further then this is a book for you. Its a great account of a nine month voyage taking in Paris, the Saone and the mighty Rhone if not in their stride then at least in a stylish stumble.

For me it was a must read book given its subject matter. However, I do have one significant reservation about the book. Terry does like his poetry which is inserted into the text at regular intervals. Personally, poetry in all shapes and guises really turns me off and merely served to interrupt a good read - a bit like academic references peppering a technical document. For me it detracts rather than adds to the read. That said, Belle is very much pro poetry (you should see the shelf of poetry books in our loo!), so one mans meat is another's poison!

I take my hat off to the Darlingtons. They inspire me to an active and adventurous retirement. I also have to mind my P's and Q's in my comments as I regularly pass their base at Sone, and have been known to frequent Terry's beloved Star for a jar or two.
ISBN 0 - 593 - 05311 - 7