What better way to blow away the Christmas cobwebs than a canal trip to the Fox and Anchor. The weather forecasters were right - a clear blue sky but a penetrating cold easterly wind. 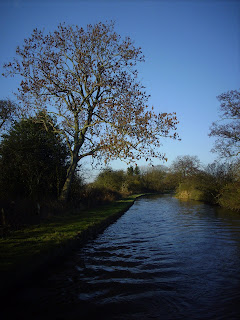 As this was a "whole family" trip I went to the boat first with Tilly, after making an obligatory trip to Game to sort out a malfunctioning Christmas present. The idea was lunch on the boat followed by a drink at the Fox and Anchor. We got all the covers off Wand'ring Bark, lit the fire, turned on the water and the electrics and finally loaded on the food and drink. No sooner had we completed all the tasks than Jeff bounces in, ready for the off.
These Christmas trips are great if the weather is kind. No ice this year but I don't think the blacking could take too much of last years punishment. We set off into blinding sunshine and soon came across more of BW's tree thinning efforts. The logs we had seen two weeks previously had all been hoovered up by heat hungry boaters, but the latest works has resulted in a huge pile of logs, all 12" long and just ready for drying and splitting. We half filled the front well deck on the return journey, enough to keep our home fire burning right through to the spring. Cheers BW! 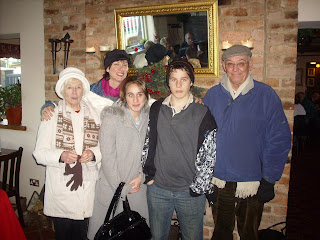 We were not alone in our plan to visit the Fox and Anchor, two other boats were out from Calf Heath, Phoenix (resplendent in a new red and green paint job) and a short tug. The pub was rammed with punters, but a table was found near the fire and a drink imbibed courtesy of my father in law. 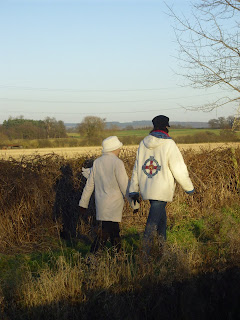 On the return journey Belle and her mother decided on a towpath stroll, getting back on at Laches Bridge. Unfortunately, as I reversed to recover them I picked up a travel rug on the prop, virtually bringing the boat to a standstill. A boaters nightmare - air temperature 2 degrees, water temperature little better and a fouled prop. There was nothing for it but to take a trip down the weed hatch. 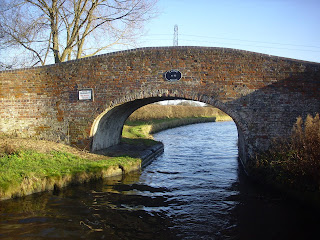 Luckily the blanket was well rotted and it tore free leaving just the border hooked under the shaft. The water was so cold my hands were in agony within one minute - its a good job it was a quick fix or we would have found ourselves bow hauling WB back to the marina! 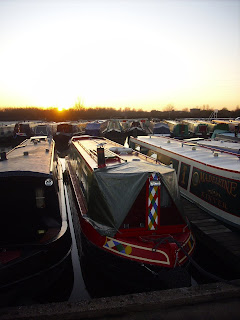 We returned (weighed down with a huge stack of logs) just as the sun was setting. What the trip lacked in length is made up for in quality of company and incident.