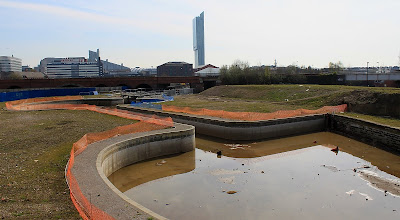 Empty pounds
Finding the entrance to the Manchester Bolton and Bury is easy. From Castlefields you just go to the Science Museum, follow it down the road to the north and then cross over and hey presto, the new River Locks out of the Irwell. 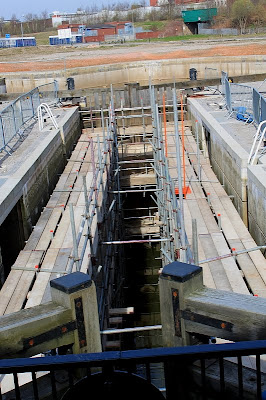 River Lock full of scaffolding
To say I was disappointed is an understatement. After all the hype and articles written about it in the waterways press I was expecting a lot more that I actually got. I didn't expect any boats or anything like that, but I did expect a canal full of water leading to nowhere. Well, I guess I realised half my expectations - it certainly goes nowhere but it was completely dry and to make matters worse the new lock was full of scaffolding and appeared completely inpoperable. 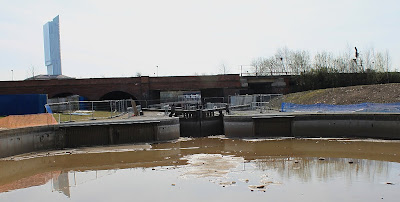 What a sad sight - a bit like an unfinished swimming pool with just a muddy line round the edge to suggest it was ever full at all.

We prowled around the site before moving over the bombsite to see the upper sections. Amidst the desolation stood a solitary portacabin and our approach triggered the exodus of a couple of security guards, who gruffly told us that it was private property and we had to get off. I did my usual "Oh my map reading is terrible and I am so lost, can you help" routine which worked a charm and off we went as best mates - me with half a dozen images in the camera. The developers have gone bust and no one knows when the area will be built - no time soon I guess.

Lock No2 - on a road to nowhere
As it happened, this was the last we were to see of the Manchester Bolton and Bury Canal for a long time, but more of that tomorrow.
Posted by Andy Tidy at 6:00 am

From the stoppages notices from BW, seems lock 1 was hurried and rather botched. With no development going ahead now the whole thing is stillborn. How sad.

Martin
The golden lining out of the whole fiasco has to be that the canal was actually built at all. I suspect that its time will come and Manchester has a proven track record of supporting ribbon develoment along the line of canal - this one leading into Salford which is in dire need of regeneration.