Every time I travel along the Worcester Birmingham Canal and pass through the Tardebigge Top Lock, I have note its depth and the guide book's comments that it replaced an earlier boat lift. 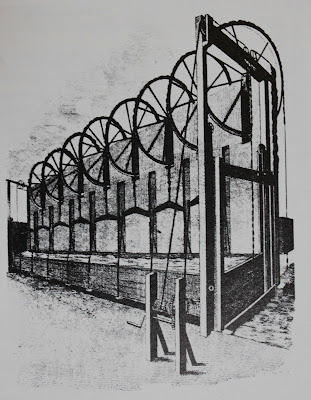 Tardebigge boat lift
I found this frustrating as I could see no trace of its location, nor could I find any indication of how it looked.
All that changed when I read The Lock Keepers Daughter by Pat Warner. Pat lived at Reservoir Cottage and her account included an image of this unusual structure, plus a detailed account of its construction and history.
The vertical lift was invented by John Woodhouse and built between 1806 and 1808, comprising a counterbalanced 72 ft x 8ft cassion which weighed 64 tons when full of water. It was suspended on 8 sets of rods on chains which were looped over 12 ft diameter cast iron wheels connected to a single axle. Access and exit was via four guillotine gates - very similar to those seen on the Weaver Boat Lift.
This rather unusual structure was short lived but in truth was something of an engineering success. It could be operated by two men with a passage time of just 2.5 minutes. At its peak it moved an impressive 110 boats in a 12 hour period.
Whilst technically successful, the canal owners were sceptical and called in John Rennie for an expert opinion. He concluded that there were too many moving parts and high maintenance costs could be expected. In the event nature intervened and the lift was damaged on a cloudburst and was promptly replaced with the deepest narrow lock on the UK system.
A curious footnote in the annals of the UK's Inland Waterways. Surely this deserves an information board at Tardebigge Top Lock?
Posted by Andy Tidy at 6:00 am

I've never physically measured any of them (I keep wondering about one of those optical "tape" measures that estate agents use) but whenever I read this claim about Tardebigge Top being the deepest narrow lock I'm a bit sceptical.

It never feels as deep to me as any of the Marple locks. Now those are deep.