Moore to Manchester
May 2018

Helen has a way of finding people, a process which usually starts with a question like "when will we be in Lymm?". 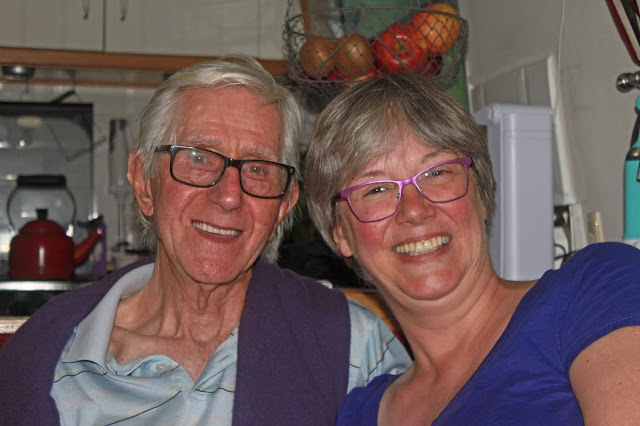 
Sometimes these questions relate to a location over 100 miles away which can be challenging, but the latest related to a long lost relative called Geoffrey and his wife Phyllis. A long and complicated family story links the two but when it gets to second cousins ten times removed I kind of lose the will. Suffice to say they are distant blood relatives who had never met. Somewhere the family jungle drums had been beating and Geoffrey got in touch to suggest a meeting when we passed their home in Lymm. This meeting duly took place and its always interesting to meet up with relatives like this, and put a bit of flesh of the bones of the Singleton side of the family tree. 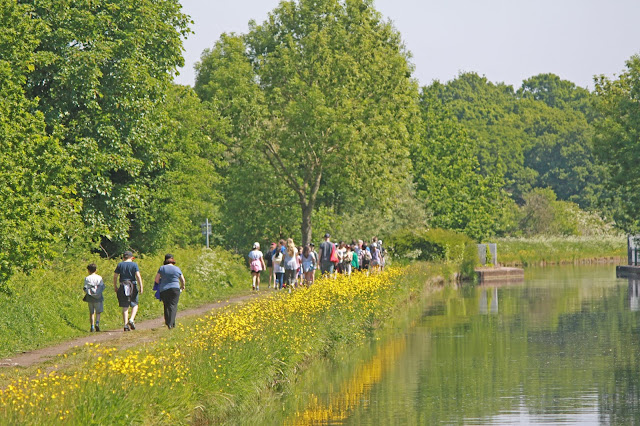 
We have been blessed with some cracking weather and the sun kept on shining as we completed our trip into Manchester. 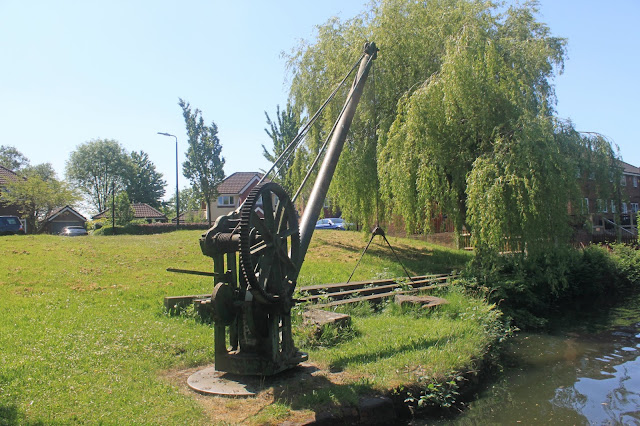 
The Bridgewater may be broad and wide but it isn't well blessed with services. I made use of one of the few sanny stations just outside Lymm and then settled in to the task of passing long lines of moored boats. I sometimes think that the raison d'être of the Bridgewater is to attract as many moored boats as possible - link linear car park. It has ever been thus. 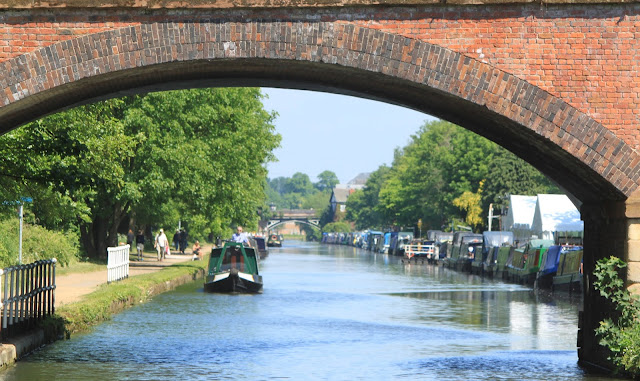 
The other thing about the canal is its straights, and none more frustrating than the drag through Sale there the canal runs as straight as a die for nearly two miles - which is the better part of an hour at our rate of progress. We broke the tedium with a stop at the visitor moorings, paying both Farm Foods and Sainsburys a visit thus stocking up for the coming weekend when we have visitors to stay.


Sale Boat Club has a "do" on this weekend on a  cowboys and indians theme, and when we called at Stretford Marine Services they assumed we were attending. They couldn't have been more helpful and offered all sorts of inside info on the area, and also provided what I believe is the cleanest and nicest elsan I have ever encountered. 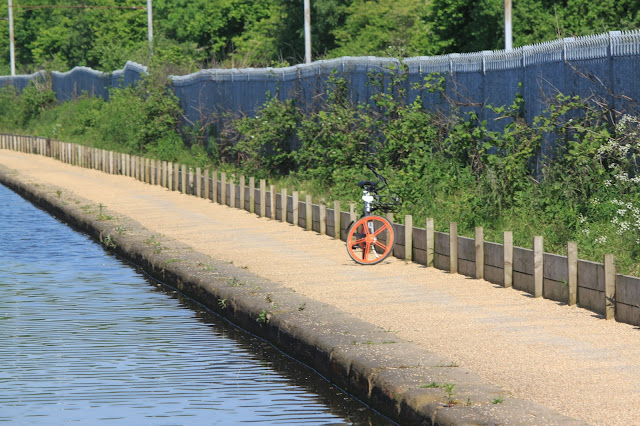 
Then is was on past a whole series of landmarks which make the journey progress nicely. Waters Meeting, Old Trafford, Throstle Bank Bridge, Pamona Lock and then finally, like Birmingham, you pass lots of urban regeneration and you burst onto Castlefields. Another local feature are the Mobikes - you find them everywhere. I saw one miles from anywhere and I was at a  loss to guess why it has been abandoned. A walk along the Rochdale 9 revealed two more which had recently been fished out of the canal. I don't see how this scheme is viable? 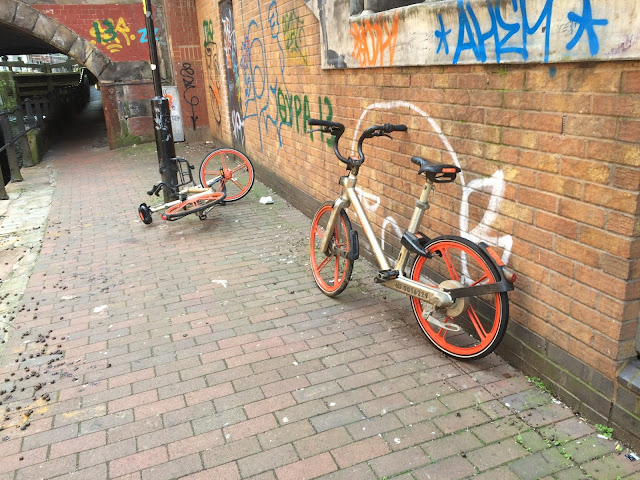 
Time has passed since Castlefields was regenerated and whilst some bits are showing signs of wear, the trees are all maturing and it is adopting a softer feel than when we started visiting. Longstanding readers will be aware that I have a particular affection for the wooden boats made by Taylors of Chester and it was therefore pleasing to see another example, Lady Avon, moored in the arm. 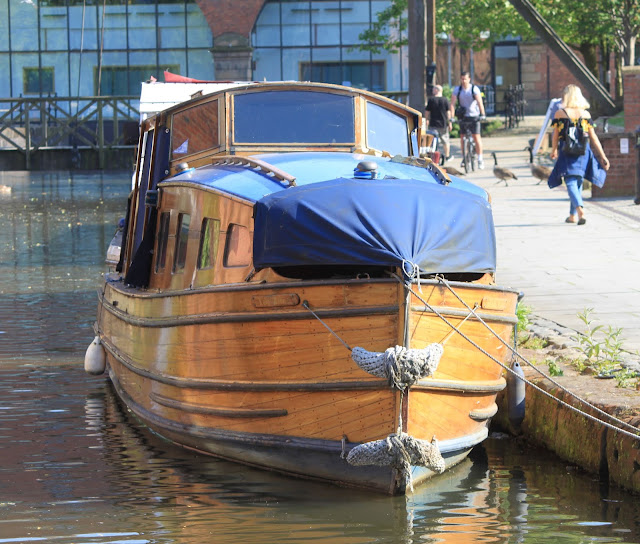 Lady Avon - a classic from Taylors of Chester


We moored in Merchants Wharf and when we arrived we had quite a few mooring options, options which were all taken on Thursday after which few slots came free. 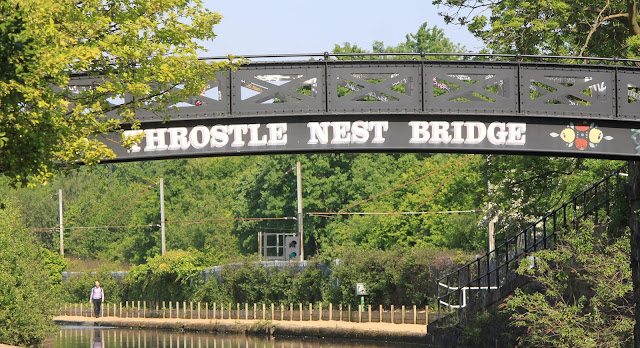 You are nearly there when you see this

Helen took herself off to see her mother in Hull and I was left to mind the boats and occupy myself. Occupying myself included a walk along the Rochdale 9 and not much else beyond reading and generally chilling out. I don't often get an opportunity to do not a lot but somehow, in all that, I still found time to make 24 jars of Raspberry and Rhubarb Jam. 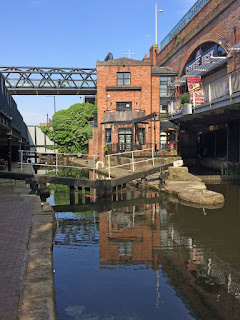 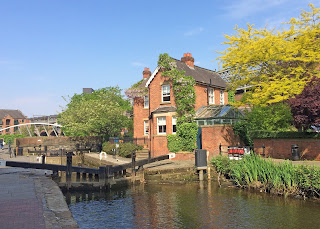 I was a bit concerned to find an request to contact Peel Enforcement attached to the boat on Friday morning, and I was left wondering what we had done wrong. We haven't set up shop, we absolutely have not been speeding!, we haven't overstayed either on the canal or in Castlefields. In the end I figured it was because we are moored to a railing stanchion in the absence of a bollard or ring (crucial ones have disappeared over the years). I duly sent them an e-mail and had a lovely reply from Gill just pointing out that as we are a trade boat we would need a license if we wanted to open and also the supplementary fee applies if we returned from Liverpool within a month. I was aware of both issues, but letting us know in advance was helpful. 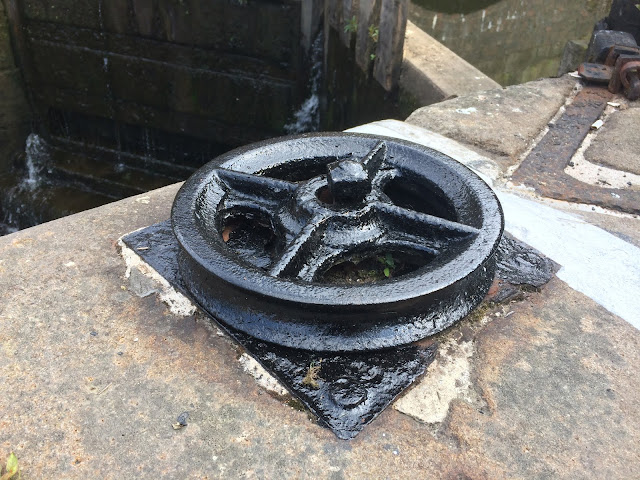 And so we sit in Castlefields awaiting the arrival of our friends. Hopefully the bank holiday celebrations this evening wont be too loud and we will set off for Leigh aiming to trade with the Pirate Boat on Sunday at Pennington Flash. Arrrrr 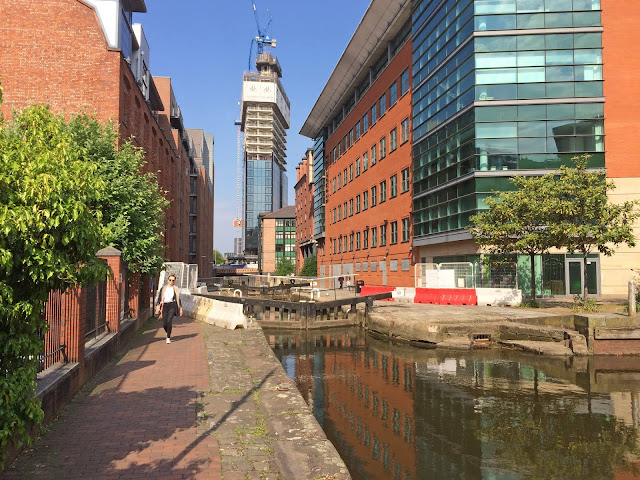 Email ThisBlogThis!Share to TwitterShare to FacebookShare to Pinterest
Labels: Bridgewater

I have Singletons in my ancestry! Maybe we too are part of the spreading tree...

Bittersweet memories seeing your picture of the Taylor boat, Lady Avon. (She belonged to my late partner from 1970 and his family parted with her following his death in 2016).