The first named storm of the season hit the Midlands yesterday messing up our plans to get back to Tipton for this weekend's festival. 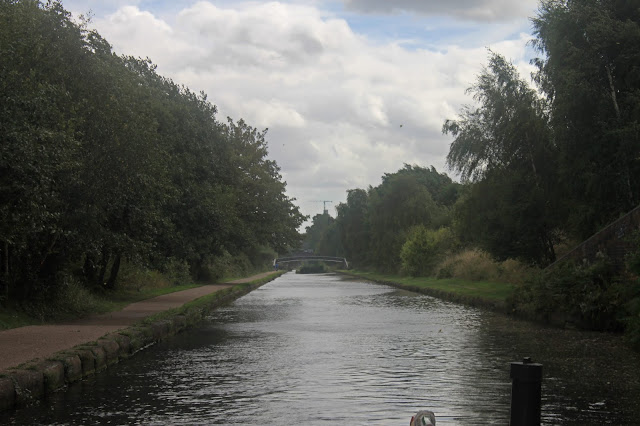 A windswept Mainline outside Birmingham

We were moored in the Oozells St Loop and with the wind gusting at between 40 and 50 mph is was far from ideal conditions to travel out to the Black Country, but it was either that or make the journey today (Thursday) is incessant rain. The wind was gusting badly but we decided that the rain would be worse, and set off at about noon. 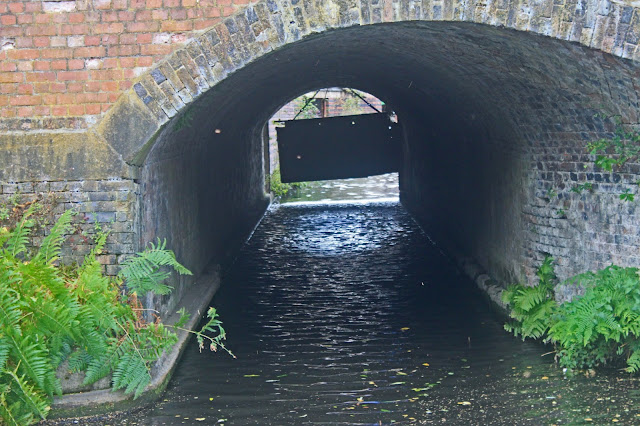 In some ways the first section was the worst. The wind was being channeled down the cut but we were moored facing Sheepcote Bridge  so we had little option but to pass through the moored boats of Sherborne Wharf. Given the unpredictable gusts I was very cautious, hooting repeatedly as I neared and passed through the bridge - to meet another boat here would not be great. Of course, a boat did indeed come the other way, only spotting me as I nosed round the corner, balancing on the wind. He was going far to fast and careered into the boats on the offside. 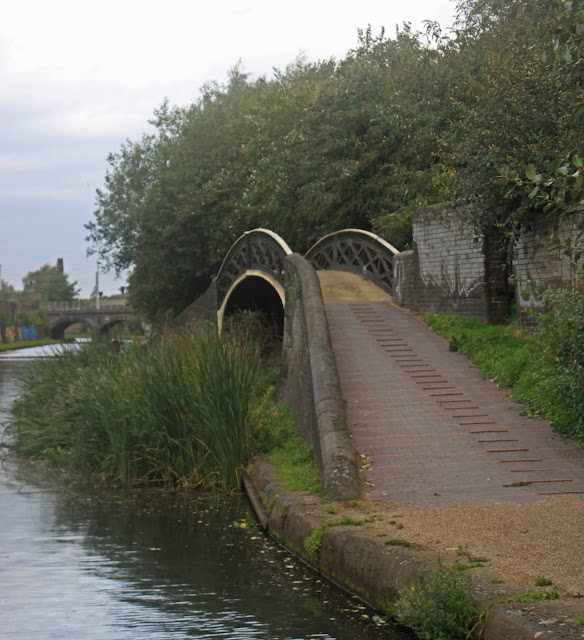 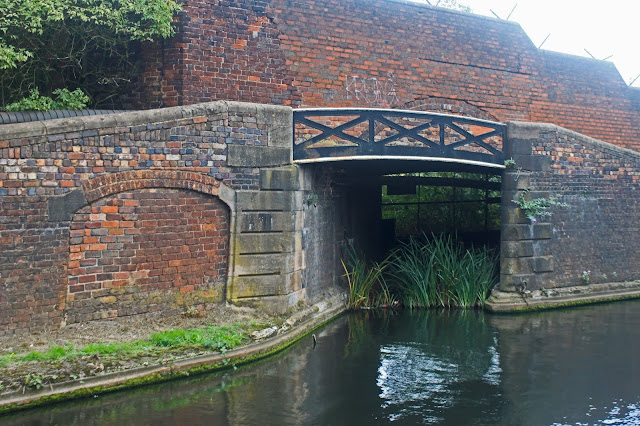 The wind blew this way and that but fortunately if the deep drafted butty is moving is resists side winds better than the motor and it is possible to use it to stabilise our direction of travel. The one thing I must never do is stop!  There were no boats moving on the NML so we left the flats and entered the main canal, crabbing here and there as blasts from the side arms pushed us about. 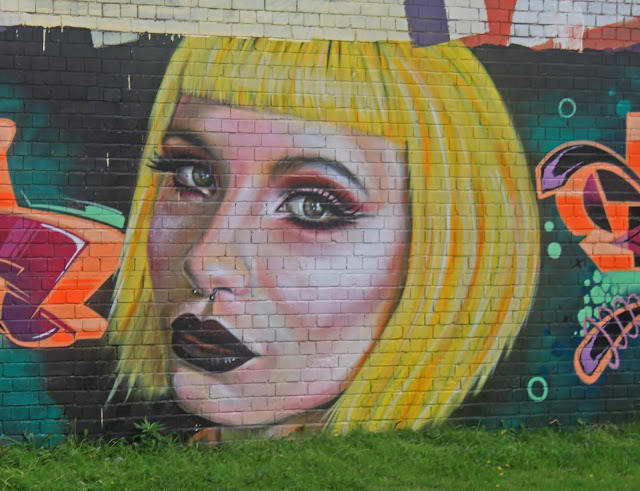 Echoes of Blondie in this striking bit of Grafitti

My plan had been to follow the Old Main Line from Smethwick, a route I have never undertaken with the butty in tow. However, by the time we reached the Cape Arm it was clear that I would have my hands full using the full width of the lower channel. Most of the route is either in the trees or within the confines of the Galton Valley cutting, and this offered a significant amount of protection from the gale which howled overhead. 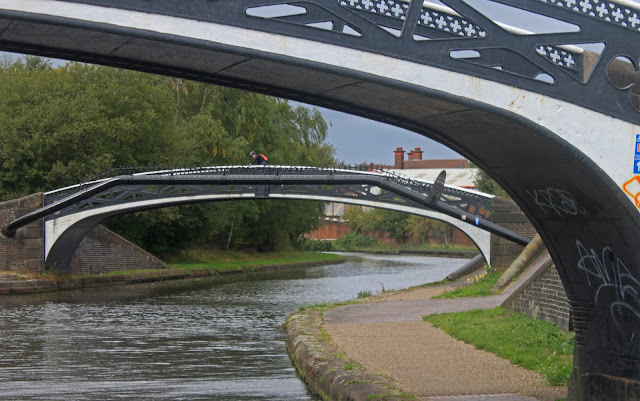 The wind was intense as we passed Chance's glassworks, with both boats veering probably 20 degrees out of true, only coming straight at the last minute as we entered narrows or bridges. All the wind was tearing leaves off the tree and we had our first taste of autumn, the prop continually clogging up  with light detritus. 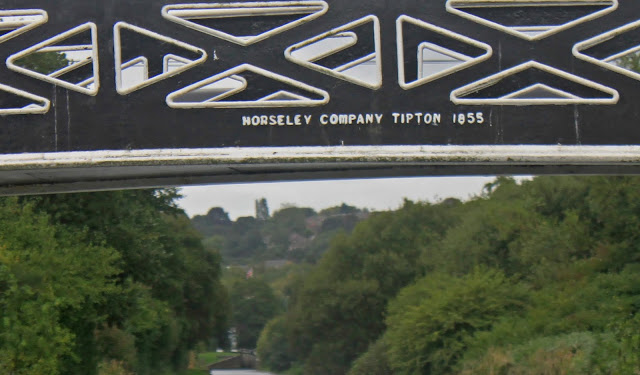 The Horseley Company's work is everywhere!

The cross winds were at their worst as we passed Pudding Green Junction and entered the Island Line, which is much more exposed and the channel a bit narrower. There was no stopping for apples on this occasion and it was all I could do to avoid being blown onto the railway bank.

The wind never abated and at Factory Locks I was driven onto the shallows on the offside below the locks. This is a foul smelling trap for the unwary and one which took a while to free ourselves from. The turn at Factory Junction was no better and we had to pause on the lock moorings for a few minutes in the hope of a slight lull, before powering round the turn and gaining some momentum. Once moving all was OK again and having phoned ahead discovered that a suitable mooring was vacant in Coronation Park, with the butty on the short kinked bit and the motor balanced out on the turn behind the railings. 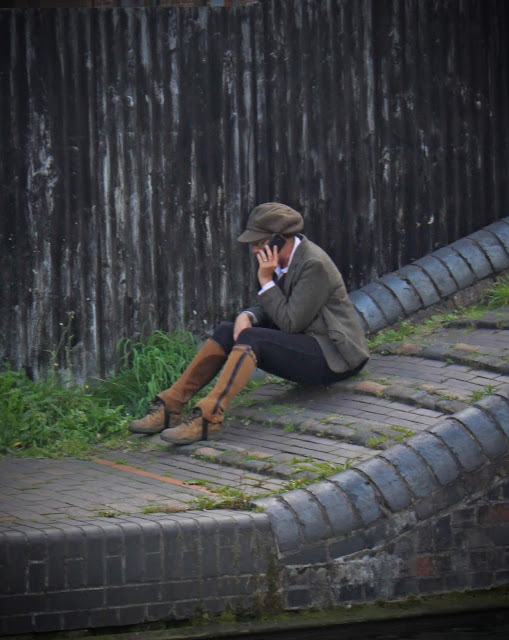 BCLM staff out of character for a minute or so

Barry kindly sorted out the butty whilst we nipped off to the BCLM to use the facilites.

The day concluded in the company of Sandra and Barry (Homebrew Boat) and I regained my mojo for Six Handed Rummy winning (with great skill) for the first time in months.  So here we sit under a leaden sky with wind and rain buffeting us around waiting for better things which may or may not arrive this weekend.
Posted by Andy Tidy at 6:17 pm

So pleased I was able to sneak in between you and Barry and help you regain your skill lol! Fingers crossed for fine weather at the weekend ...