2. Higham and Strood Tunnel
March 2019
This is the Walter Mitty of canal tunnels, with its 3,946 yards holding the second place for a tantalisingly short period of six years. 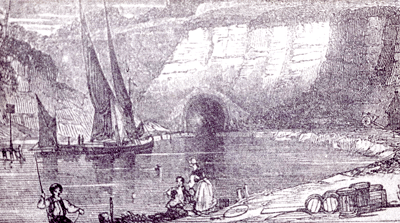 The Higham and Strood during its short operational life
It was opened to boats in 1824, but tidal flows through the seven mile canal made passages very difficult. It was soon reduced to two shorter tunnels when a 100 yard central passing place was opened out in 1830. The result was the creation of the paired Higham and Strood tunnels, neither of which would meet my 2,000 yard qualifying criteria. 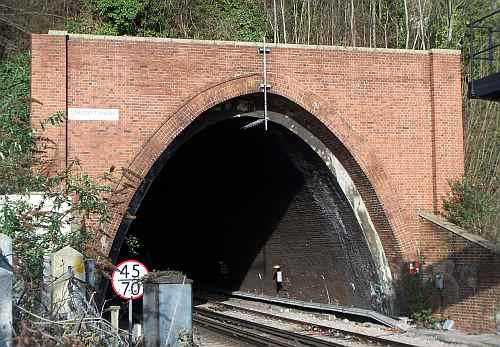 And as it is now
I suspect that this is the UK’s least known long canal tunnel, but perversely it is also probably the most travelled canal tunnel of all time. In 1845 the canal tunnel was shared with a new railway track, with one half resting on the 5ft towpath and the other side precariously supported on wooden pilings set in the water. Even in those laid back days, the railway inspectors deemed it unsafe and in 1846 the whole tunnel was sold to South Eastern Railway who filled in canal channel and laid a double track forming part of the North Kent Line. The line remains operational today and regular commuter trains rush through at up to 70mph on their way to St Pancras station. 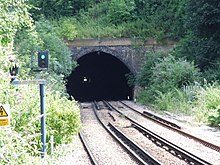 Compare the profile of the portal to the water filled etching above
But we are jumping ahead of ourselves. 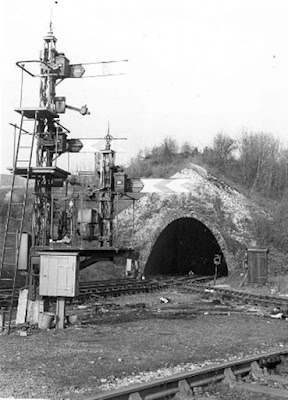 When the tunnel was built by the Thames and Medway Canal (aka the Gravesend and Rochester) it was a huge structure, 35ft high, and 21.5ft wide at the waterline plus its towpath. It was built to these generous dimensions to allow 60 ton Thames sailing barges to pass through with their masts lowered, and in doing so avoiding the rather perilous passage round the Hoo Peninsular.

A train in the opened out central section
Initially the tunnel consisted of the unlined chalk of the North Downs, but repeated rock falls resulted in the installation of brick lining, a process completed from end to end in 2005. Most falls were in the areas weakened by the six construction shafts.
As suggested by its short life as a navigable tunnel, it was never a popular or successful route. Boats were often caught between tides in the central basin and the journey down the canal often took longer than the more risky passage round the peninsular favoured by the barge skippers.