CRT will soon be holding elections for seats on their National Council. 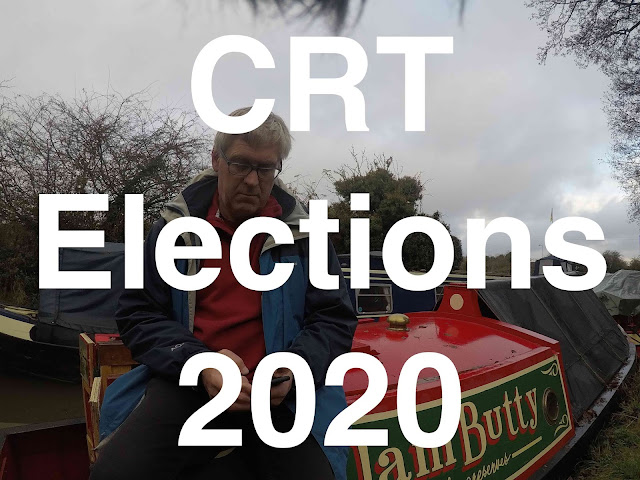 The names of those standing will be published on 25th November and voting will take place on line between 20th Jan and 14th Feb 2020.

All 12 month license holders on CRT's books as at 19th Sept will be eligible to cast a vote.

I have represented Business Boating for the last four years I can confirm that I will be standing for re-election. However, because the 500 Roving Traders have now been included in the Private Boating constituency, I will this time be seeking votes from the wider combined Private Boating and Roving Trader community.

The election pages limit me to a manifesto of just 200 words so, to supplement this, I have produced a short YouTube video explaining the role of the National Council and why I am standing for re-election for a further four years.

Click on this link to take you straight to my video.

I would be grateful if you would 1. share this around the various on line forums to spread the word and 2. vote for me when the time comes.

Andy, out of the 4 current private boaters reps I have only seen 1 (Stella) give any feedback/ask for comments from those who they were elected to represent (unless I've completely missed something). Why should anyone bother to vote (if there is a vote) when we have no idea what our reps are saying?
I've only watched 2 minutes of your video so apologies if you covered this.

Roger, as a business Boating representative my communications have tended to be directed towards that electorate (Stella is a Private Boater Rep). I have tried to keep the business boaters informed about what issues are covered in the various CRT meetings via a series of Blog Posts called CRT jottings (they are not formal minutes) and if you look at the "waterways covered" column on the right hand side of my blog there is a line called CRT and that links to the 13 blog posts I have published over the last 4 years. The blog posts have been posted onto my Facebook page but how widely they are circulated very much depends on other people sharing them - Stella generally uses my jottings in her Facebook Posts. I was looking at the reach of my blog posts and so far the most widely read one covered the 2018 CRT Public General Meeting which reached a creditable 2000 readers, plus those who read the various cut and paste versions which do the rounds.
I would like to think that I have gone a long way to opening up the subject matters discussed, but I will admit that to date my feedback has mainly focussed on my Business Boating constituency.
Andy

I wasn't including you as I know that you have fed back to your 'group' I'm just a tad disappointed at how 3 of the 4 private boaters reps expect to know what other private boaters think when I haven't seen them being particularly 'obvious' or how they have reported back to anyone. I've read Stella's postings and she has linked to your blog.
I don't think any boater is more aware of the work of the CRT council than 4 years ago and with a very poor 16% turnout I had hoped that soem of their work in this 4 year period would be raising the profile of this body and those who sit on it, elected or not.
Slightly different issue - why did CRT move roving traders into private boaters? Was this agreed by the council?

Roger - comms with the electorate is an ongoing problem I must admit.
Re he transfer of Roving Traders toPrivate Boating constituency, I have to admit I argued against it whilst I did agree that given the number of RT's (500) there was every danger that as things stood both Business Boating seats could easily be won my Roving Traders and leaving Hire Boat, Charity Boat, Boatyards Marina's etc without a voice - which would be a bad thing. Council did approve the change in September along with a raft of other governance variations.