With both Tilly and Jeff off on a camp, Belle and I had an unprecedented six days to ourselves. The plan had been to take WB down the Severn, possibly as far at the Gloucester and Sharpness before returning up the Avon and leaving her just short of Stratford for a couple of weeks, returning her to Calf Heath later on. As we drove round Birmingham to drop off one car the terrible state of the tributary rivers became apparent. It was clear that the Severn would be impassable for some time, so we devised plan B which involved the Caldon Canal, which was about as far from a river as it was possible to get. The flooding turned out to be the worst in 30 years with Tewkesbury and Gloucester submerged. 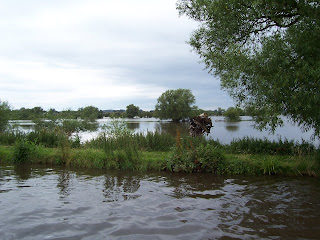 The first day was therefore somewhat delayed and we set off at lunch time, making our way through Penkridge where we got our first glimpse of the Penk Valley. The Penk is usually no more than an overgrown stream in summer but it has amazingly transformed itself into a mile wide sheet of water flowing over a metre deep. We got as far as bridge 94 near Deptmore Lock, just short of Stafford Boat Club. The rain finally paused allowing the Captian 30 mins of fishing before the evening meal. The fish were in fine form and he pulled 10 good sized specimens out of the water in quick succession. The mooring is fairly remote but the south westerly breeze carried a fairly constant drone from a nearby main road.
Posted by Andy Tidy at 1:28 pm