It blew a gale overnight and I awoke to pouring rain so I had a lazy start to the day and finally got on the move at 11am. I immediate fell in behind a rather slow boat and dawdled my way to the Tyrley Locks, letting some space build up between us. 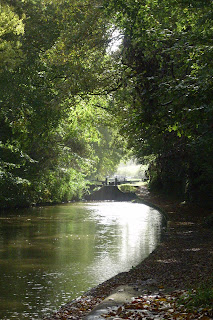 It happened that a crew were descending, so I waited and fell into conversation with the owner of the boat in front, who was a continuous cruiser and had been aboard for for five years, slowly making his way around the system accompanied only by his dog. He was a quiet but friendly man who graciously lifted a bottom paddle on exiting the lock and so eased my passage. His boat was called “Inky and I” so I guess I was talking to “I”. Mind you, I am sure he called his dog Spot which was curious. Maybe boats live for longer than dogs… I followed “I” right through Woodseaves Cutting, which was made ponderous by the huge number of leaves brought down by the overnight winds. There was no danger of breaking the 2mph speed limit today. We finally parted company with waves and greetings at Goldstone Wharf, with me on my way to Calf Heath and him to his winter moorings half way up the Bradley Arm of the BCN. (see log entry May 2007). 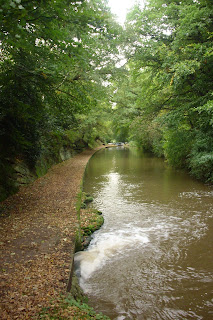 The passage up the Tyrley Flight and through the cutting had been sheltered and in sunshine, but all that changed as I left Goldstone behind. Dark grey clouds streamed in carried by a gale force wind which sent WB crabwise up the cut and became wild as I crossed the lofty Shebdon Embankment. Just beyond the old Cadburys works a boat pulled out when I was less than 100 yards away and then veered from side to side. I quickly realised that this was the same boat that has been making a total hash of things in the area the previous day so pressed on and passed by without delay.

By the time I reached Grub Street cutting the clouds opened necessitating a quick stop to don full waterproofs, have a pint of water and stoke the fire – all whilst the boat continued at tickover and without touching either bank. This is not a trick to play when there are other boats around. 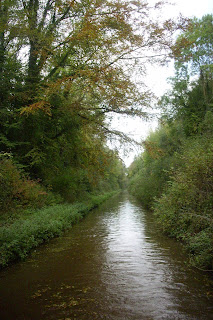 From here on the rain never let up and I passed a sodden Norbury Junction with few signs of life, apart from a curl of smoke from the residential boaters. I had the canal to myself all the way through Gnosall, but was constantly reversing to clear the clogged prop. The surface debris was so bad that at times the prop was fouled the minute I started up. Progress was therefore very slow.

I decided to press on a bit further and stop at dusk, hopefully stopping at Little Onn, just before the Rye Hill Cutting where I had noticed a good mooring spot after bridge 24. The spot was also recommended by a walking boater who helped me with Tyrley Top Lock. I arrived in the failing gloom to find plenty of space and a sheltered haven for the night. 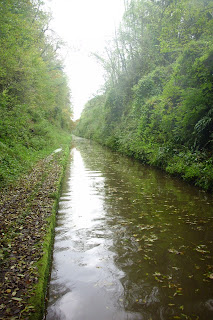 The evening was spent drying off in front of the fire and watching a few episodes of Dads Army, followed by an hour of The Water Road, an excellent canal travelog by Paul Gogerty which I have been rereading whilst away. Whilst it follows the established theme of “man takes off in a boat and finds both himself and the lost England”, PG is a travel writer by profession and therefore writes very well. He explores the people around the cut and therefore introduces a rich seam of human life interest, which is engaging, bringing the trip to life.

The rain cascaded down, the wind howled and I settled in for a cosy last night aboard.
Posted by Andy Tidy at 11:27 pm