This second day is a relatively short leg and given the inclination and a crew, you can reach the bottom of the Audlem flight quite comfortably. However, this is a laid back single handed cruise so no need to set a challenging timetable.

The overnight rain had lifted and the day broke clear and bright. Just the opportunity I had been looking for to service the engine! I had passed Seethay Wharf in the car on Friday so had purchased the necessary consumables, together with some new sump pump brackets from Beta Marine so all was set. Nothing is simple on boats is it? The brackets turned out to be too big to grip the pump but hey presto, Duck Tape to the rescue. Four turns round the barrel and it was snug and secure.
With oil / filter changes, batteries topped up and an additional 5ltrs of anti freeze added I was off at noon.

The Shelmore embankments provided a good view of the Wrekin in the distance, followed by a stop at Norbury Junction to take on some food supplies and extra coal for the fire. The Norbury area was awash with fishermen who were evenly spaced for three miles, yes three miles – all the way from 1 mile before Norbury to the northern end of Grub Street cutting. I have a policy with fishermen, I pretend that they are moored boats and therefore pass them at dead slow and straight down the middle. I don’t make much progress but I do attract plenty of nod, winks and "watcha’s" from this normally taciturn breed.

Hunger forced a stop at Park Heath Wharf where I retreated from a growing gale to stoke the fire - both the one in the grate and the one in my belly. 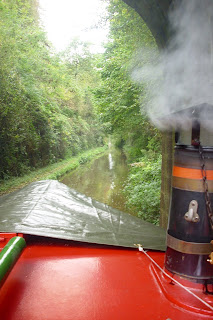 Woodseaves was an absolute delight and taken with the lovely Tylrey flight made a great end to the run. Woodseaves was a riot of autumnal colour and on this occasion I had it to myself. This space allowed me to stop under the bridges and take some excellent photos. This run offers the best of the Shroppie’s cuttings and of all, I love Woodseaves the best. As a child my parents took me on canal holidays and these must have included the Shropshire Union. Throughout my teenage tears I used a mental image of an endlessly straight cutting with a magnificent high bridge at the end as a picture to help me get to sleep. I would lay there with my slowing heartbeat being the rhythm of the boat engine driving me oh so slowly towards the bridge – but I always fell asleep before I got there. I assumed it was a amalgam of various canal images, but was shocked to discover it was a real place – Woodseaves! 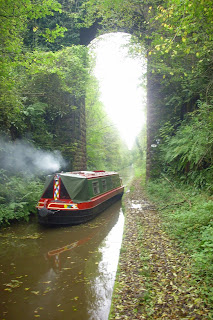 Tyrley Locks where delightful with their cute workers cottages at the top. Fortunately I met two boats coming up which is always a bonus for a single hander. 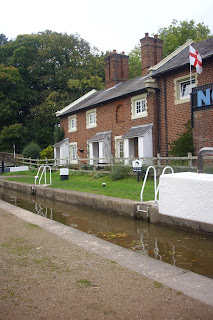 I rolled into Market Drayton just as darkness was falling and a fine rain was in the air. On the final run in I encountered a turtle. Yes, a turtle – you know a scrawny necked creature that pokes its head out of its shell. In this case it was the boating variety who felt that my slow wasn’t slow enough so out popped this withered head on a stick and all ranting and gesticulation. Poor old bugger, he can’t have much of a life if that’s all he has for entertainment. 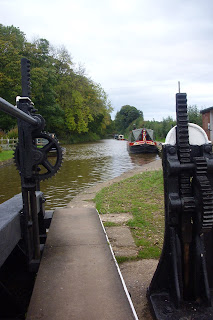 Settled on my now regular moorings alongside the school playing field, consumed a hearty salad and sardines (I know how to live... actually I also know how to lose weight - two stone in two months thanks to the Cambridge Diet and self control) and settled down to watch Bond's Goldeneye.

Another great day aboard WB.