This is the Capt’s annual autumn solo cruise. However, solo does not always mean alone!
On this occasion the Capt is accompanied by Jeff for the first day and as Belle was away for the night we decided to sleep on WB after Jeff finished youth club. We arrived at Calf Heath at after 11.00pm and promptly set a fire to take the chill off the boat and settled down to a peaceful night in the marina.

We woke at 9.00am and were ready to meet the Chairman (and wife) of the Lichfield and Hatherton Canal Restoration Trust when they arrived at 10.00 am to take some photos to publicise the Capt being the 2000th member of the Trust (see IWA National Festival). The resulting photo will probably grace the front cover of the Trust's newsletter, so I will post a copy in the log as and when it appears. 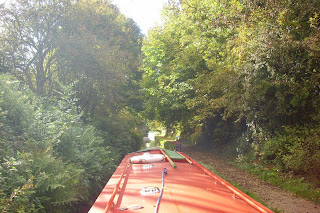 The weather forecast for the next four days is mixed so I have opted for the relatively lock free route to Market Drayton, which will make for an easier home run if the rain sets in. This route is particularly beautiful in the autumn as it includes the vast wood lined cuttings of the Shropshire Union. I have done this run a number of times before and never tire of it.

The first day is a regular trip to Gnosall. Initially it was sunny and mild but a freshening north westerly wind picked up as the day progressed. We paused for some lunch at Autherley Junction, mooring up on the rings created to the IWA festival at Pendeford Park. The weeds are already running riot and the moorings will have returned to their normal wilderness state by next season. 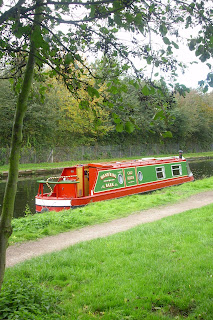 Whilst it was a Saturday, there was very little traffic on the move, just a few hardy souls overnighting on the popular sites South of Chillington Wharf and Little Onn. We pressed on to Gnosall arriving in the gathering gloom and moored up alongside the Navigation Inn. The Capt is on a determined weight loss campaign (1st and 2lbs since May) so whilst Jeff tucked into a huge curry, I had to “enjoy” a hearth mixed salad with tune. Ho Hum. 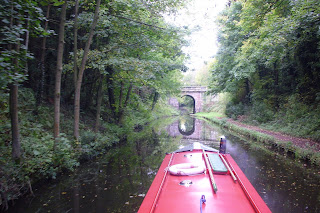 Belle was due to pick Jeff up at about half past eight but had trouble on the journey from Nottingham so we watched 3 classic episodes of Dads Army on my new company laptop. Jeff finally left at about nine thirty leaving the Capt to his three days of solitude.
Perhaps I should say something about this solitary thing. I am normally a very sociable sort of man but there is a strong solitary part to me that needs a bit of space once in a while. Satisfying this need is probably the hardest part of parenthood, but thankfully Belle recognises the need and is happy to give me this space each Autumn. It’s a really special time for me and spending the time away on the boat for the last run of the year really hits the spot. 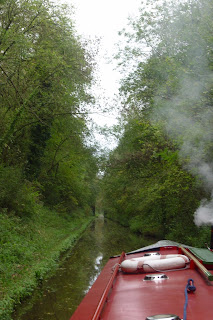