The Bookshop that Floated Away - book review

The Bookshop that Floated Away
by Sarah Henshaw
April 2014

I trailed this book a few days ago and a subsequent long haul business trip provided ample opportunity to read it. In fact I started it in Birmingham Airport and finished it about 10 mins before touchdown in Yerevan, Armenia. 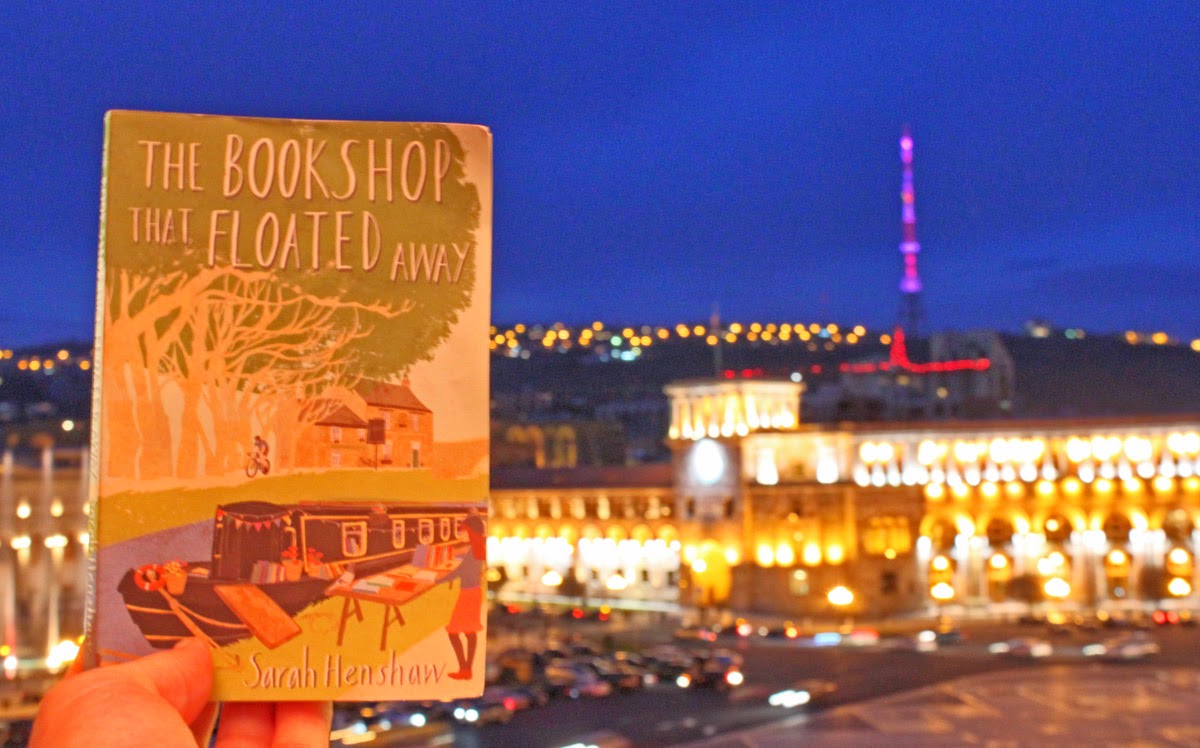 Now before I start, how about a little competition? The above photo shows a well thumbed copy of the book against a night time back ground of central Yerevan, taken from my hotel balcony. Can anyone post a picture of this book in a more remote or obscure location - lets call the competition "The book that floated away"!

And so what about the book? Well, like its author I can, without fear of offence, safely describe it as quirky. It is a canal book like no other that I have read, not least because I discovered that the Ahabs / Tidys feature no less than four times as the Book Barge makes its slow way round the Inland Waterways.  But the main distinguishing feature of the book is that it is as much a literary voyage as it is a travelogue. Sarah Henshaw not only sells / barters books, but like a bad publican she has in insatiable urge to consume her product. However, unlike a publican, the consumption of literature has a mainly positive effect on the consumer and of course, a bookseller can always sell on what she has already read.

Its easy to imagine the author spending long solitary hours at the tiller, pondering the things she has read and people she has met over the years - and all the resulting connections come pouring out of the pages.

As an ex bank manager I particularly loved her unorthodox (and unsuccessful) way of trying to raise finance and for the die hard boaters you will be profoundly interested in discovering how she attended to her "natural needs" on a boat with no loo. I am not going to tell you - for that you will have to read the book and have a good titter!

Sarah's love of literature shines through on every page, drawing parallels and insights of a myriad of authors - some well known and some less so. All in all its a literary smorgasbord set against the backdrop of a somewhat haphazard six month canal journey where the escapades and scrapes are faithfully portrayed - I know - I was there for some of them,  not least the surge up the Severn Estuary on the top of one of the years biggest spring tides.

Its very hard to be objective about Sarah's first book because I so want it to be a success. For my money it is a canal travel book with a distinctive USP. If you like canals and literature all recounted in a slightly tongue in cheek self deprecating way  it's one for you.

There are not many Sarah Henshaws around in the world, they are as much an endangered species as the independent bookshop she campaigns to save. So get a copy, give a copy to your literary / boaty friends, support the Bookshop that floated away.

Copies are available from the Book Barge website and at the Birmingham Spring Market in Digbeth tomorrow, Sat 12th April.

We met her for the first time tonight Andy, and we're moored up together tonight in readiness for the Spring Market tomorrow.

What an honour to be trading alongside her at The Bond, Digbeth.