Distillation of a day

Distillation of a day
July 2017

Not a run of the mill day at all. 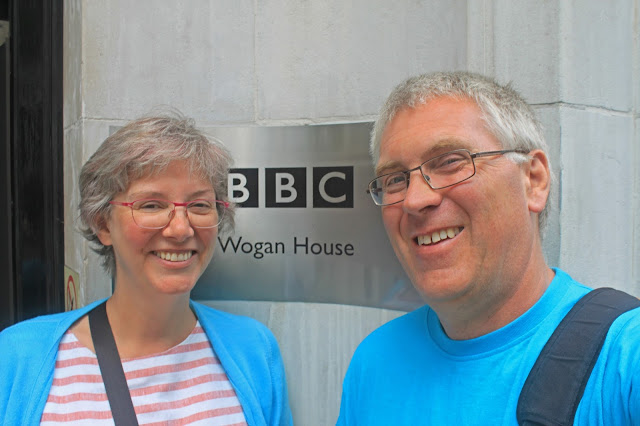 We started the day with a visit to Broadcasting House, courtesy of a guided tour by Adam Porter. The entire experience proved to be fascinating, starting with a look at the TV news set up. This is the bit you see behind the newscaster who operate in a largely robot controlled studio immediately below the entrance. There was also the weather zone with its cameras, charts and trundle cams and it was really interesting to see just how all the elements of the news output fits together. 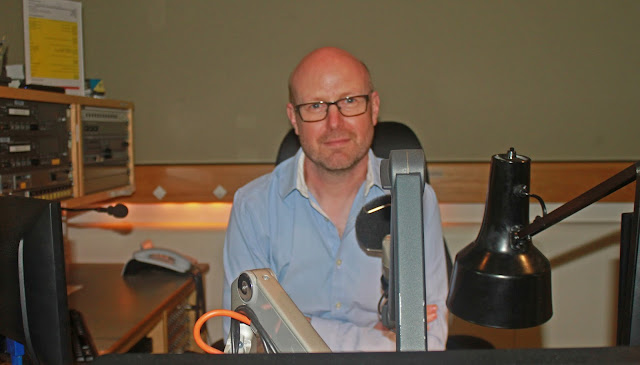 Then, after lunch, we visited Wogan House and specifically the Radio 2 floor. This had a hugely homely feel to it with Jeremy Vine interviewing a butterfly expert whilst fielding calls and messages interspersed with musical items. Funny to listen to and hilarious at close quarters. At the same time Steve Wright was preparing for his afternoon show when Helen wasn't throwing herself at him any plying him with home baked muffins! 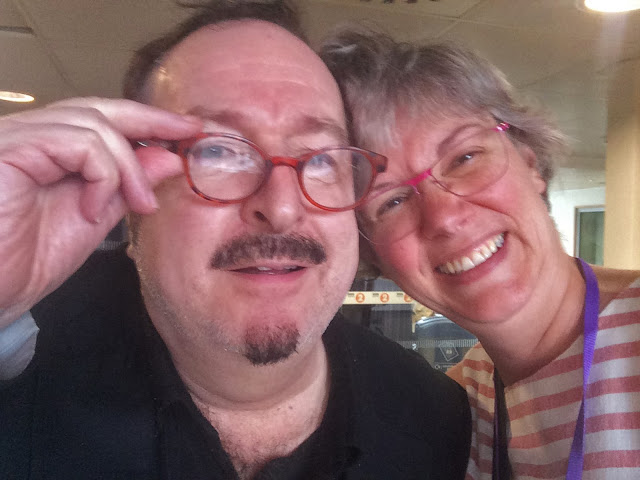 Radio two seems to have been a constant part of my adult life, and the Steve Wright Show going right back to its Radio 1 roots. So seeing the man himself and listening to the switch between shows with Adam's news slot acting as the bridge was great. Adam - thanks a million. 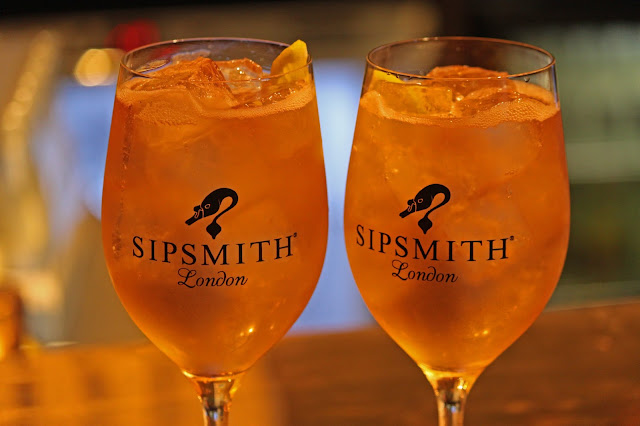 Then it was off to visit the Sipsmith Gin Distillery in Chertsey. This was a long awaited trip which had been delayed due to Helen's illness last year. We were part of a group of about 50 who were treated to a history of gin, Sipsmith's 8 years in business and, of course, a comprehensive sampling session of their entire range. 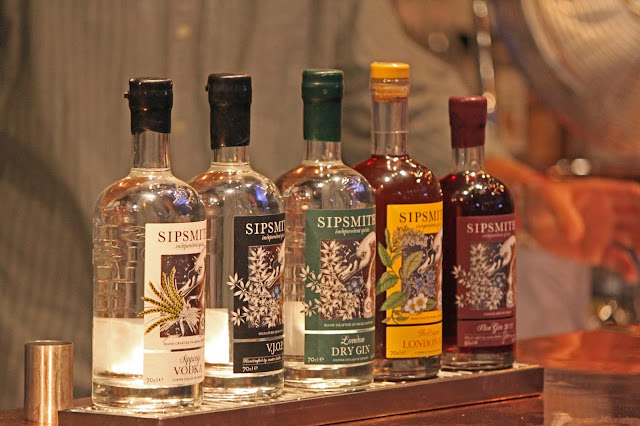 I didn't know quite what to expect and it was a little surprising to find their boutique distillery tucked away at the back of one of Fullers (London Pride) garages. This is a young but fast expanding craft distilleriey but one which broke new ground by obtaining the first distilling license in London for about 180 years - no mean feat. 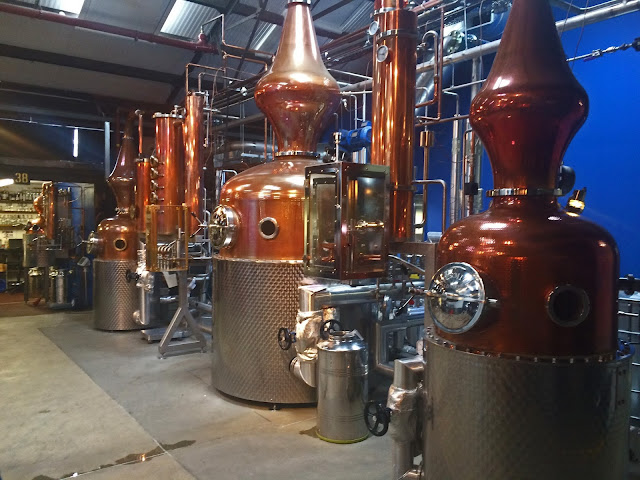 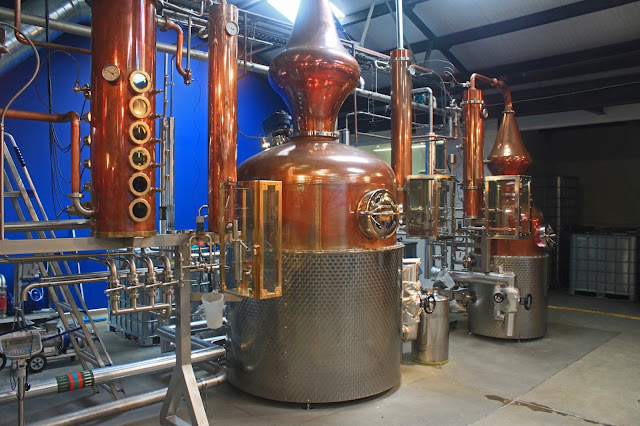 They started with just one small still called Prudence, commissioned just as the financial markets collapsed in 2008, followed by Patience which was converted from a mash boiler. This was most recently joined by the 1500 ltr Constance which was in full production at the time of our visit. 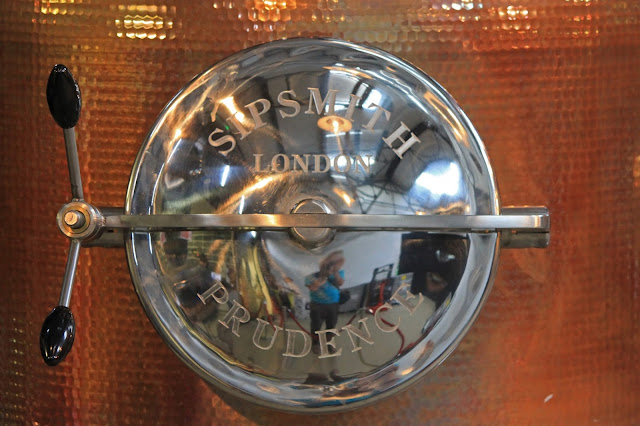 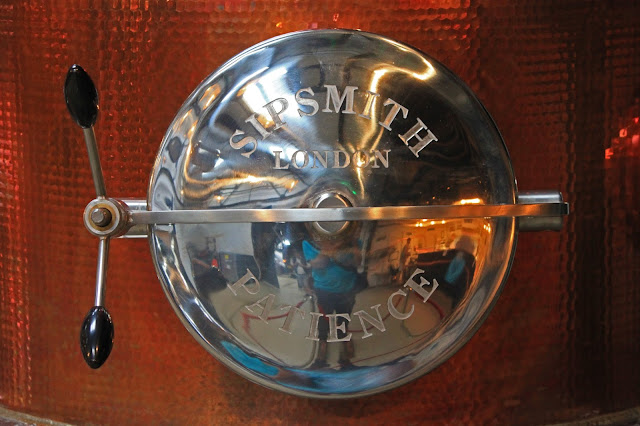 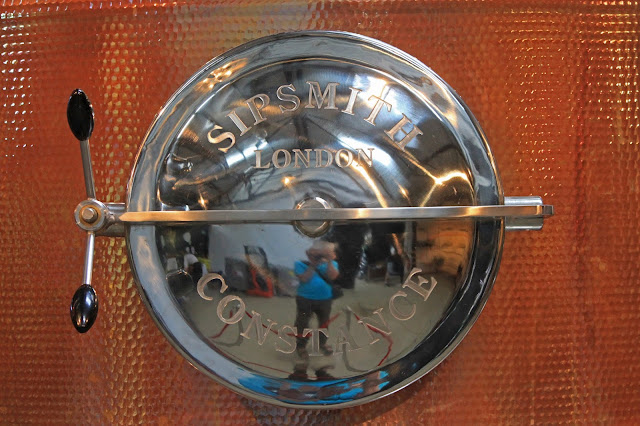 There is one more, small still known as Cygnet tucked away in the R&D area, used to test new product lines which are dispatched to the Sipsmith sipping society - the die hard fan club. 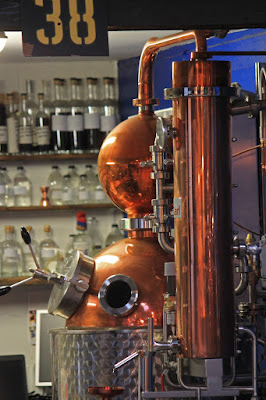 I have more than a passing interest in the distilling process and it was interesting to trace the process and see how it was all working. The process uses bought in grain alcohol fermented and distilled by a major third party alcohol producer. Sipsmith take the industrial alcohol and add their mix of botanicals plus water and, after steeping overnight, heat it up till the alcohols evaporate and condense to form London Dry Gin. The copper container has something to do with altering the taste, but I didn't quite understand how that happens. 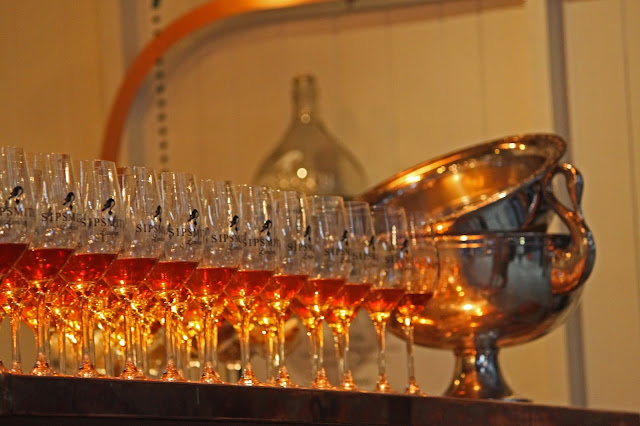 Constance was producing a strong from of their core product which was being collected in a plastic drum behind. As with smaller stills, they discard the dangerous heads and the poorer quality tails and thus keep and sell just the quality distillates. 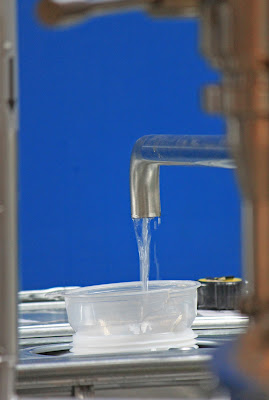 The output from Constance

One fact I hadn't previously realised was that the initials VJOP stands for "Very Junipery, Over Proofed" which essentially means that the juniper taste is extra strong and the alcohol content is extra high and makes is good for mixing and ensuring that the taste and strength still come through. 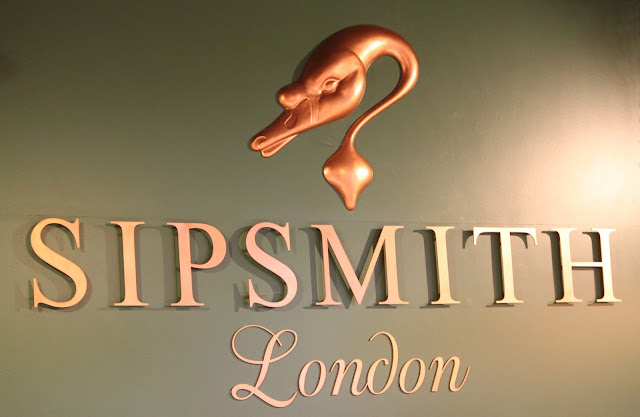 Every product line was explained in context and generous samples offered. Five was about the maximum you can taste, appreciate and remember but even then you wouldn't want to drive home afterwards.