As I suspected, the trip downriver was achieved much faster that the upstream route. This is partly attributable to the assistance of a slight current, but more that we were running the boats line astern. 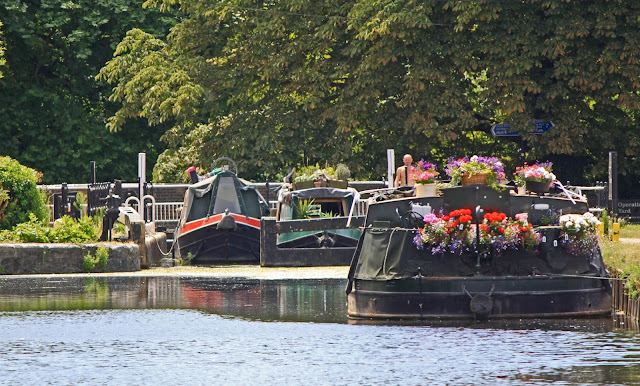 Thursday was a short six mile run down from Fielde's Weir Lock to Cheshunt, where Helen would rejoin me after her few days away. I took the opportunity to rewire the freezer condenser fan I installed in Oxford using multi core wire salvaged from the butty when I stripped out the old loom. This was a pressing need because I had installed it using some single core wire bought with the fan from Maplins. Single core wire on boats is a no, no on account of the vibrations and the risk that the single wire will fracture and break causing a spark. 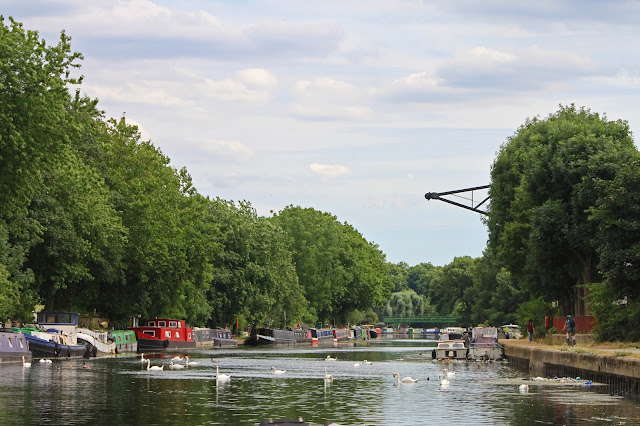 Swans at Tottenham - like Stratford on Avon but with rubbish!

It was than on down the river in 26C heat to meet Helen from the train. I found a shady spot near a footpath to the station and waited. At 4.45pm I decided to get ready to go and find her and much to my horror the loo kind of exploded. Well, the sliding trap mechanism jumped out of its cogs and the resulting mess as I removed the loo to fix it was beyond words! Helen waited patiently in the shade at the station as I completed the repair, cleaned up and had a much needed shower. Perfect timing.

Hot days lead to hot nights and these last few have not been conducive to a good nights sleep.

Friday was hotter still and we have a rendezvous to be kept in Limehouse Basin on Saturday afternoon, so we had to make progress down the Lee. As luck would have it, every lock was set for us and every lock had a gate standing open, which meant Helen didn't have to stand out on the worst of the heat and instead followed the tennis in the relative shade of the boat. 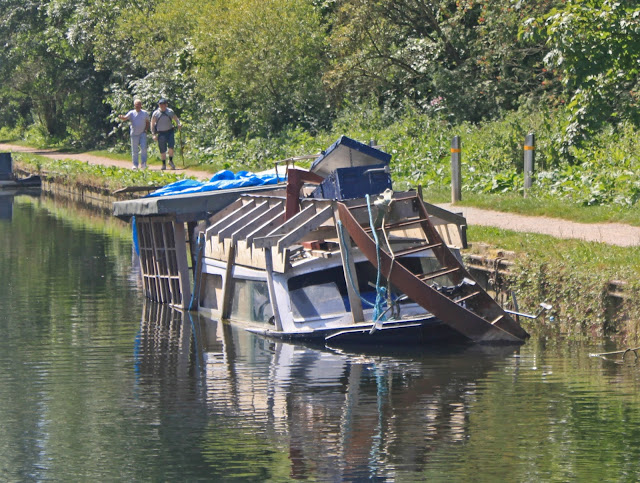 A project too far - including a curved steel staircase.

The volume of traffic on the Lee is minute, given the number of craft moored. I passed just two boats heading upstream at Enfield and one broad beam came up behind me at Tottenham. This is not a busy waterway by any stretch of the imagination - its just hard to find a mooring.

1. CRT have a problem with fly tipping in their bins so have removed a lot of them, saving £15k a year. Issue - there is no where for genuine boaters to dump their waste. End result, informal tips like the one at Fielde's Weir and the moored hopper at Waltham Abbey get filled instead. I can see that boaters want to dispose of rubbish responsibly (in the main) but there seem to be no facilities. I am sure the resultant clear ups from fly tips will cost more than £15k..... 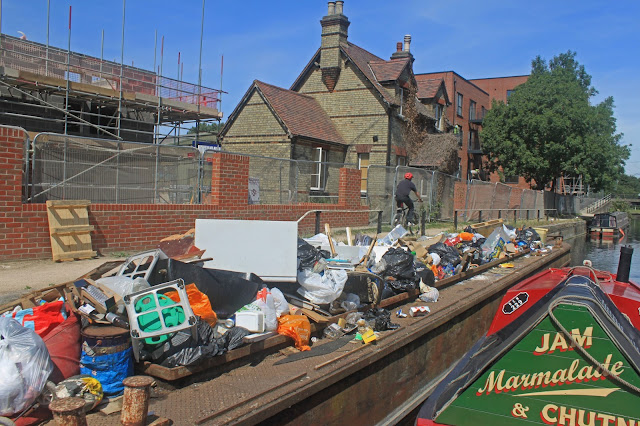 2. There is a notable absence of Sanitary Facilities for Elsans. Unless I have missed it, the last one was 16 miles back at Fielde's Weir with the ones at Waltham Cross and Tottenham Hale missing, in spite of my Nicholsons indications to the contrary. Lets hope the facilities at Old Ford Lock are present! I have been wondering how all these hundreds of boats manage and I guess that there is a conection between the lack of facilities and the fact that a few years ago the Lee had 400 times the recommended amount of fecal matter! It makes me think twice before diving down the weed hatch. 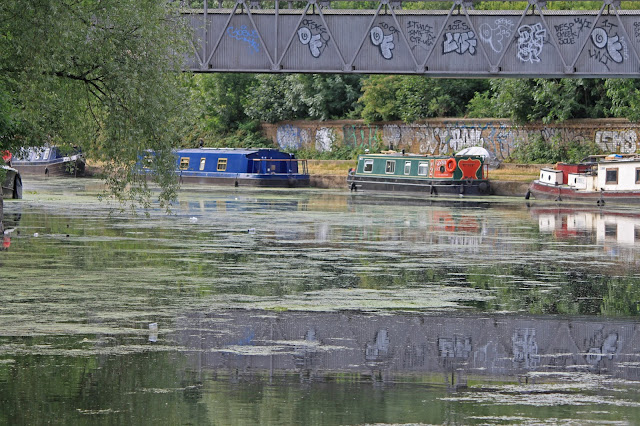 3. In the Midlands I am used to oiks starting conversation with a surly "Oi mister - how much did that cost (nodding at the boat)". I have had none of that here in London. Instead I am constantly being asked - "do you rent that boat?" These comments, and comments in London Boaters suggests that the incidence of informal boat renting is rife with big money to be made from modern day Robert Rackman's. CRT are rightly tackling this issue and the next challenge will be to identify which boats are not occupied by their owners.

And so we passed under the M25 the the generally pleasant landscape changed abruptly. Gone was the woodland and in their place mile upon mile of raised reservoir banks, industrial units and even the London Incinerator. 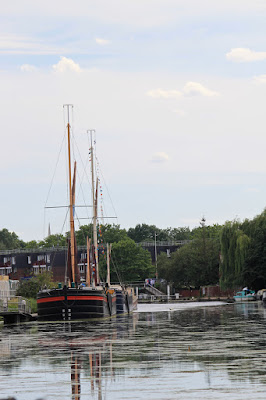 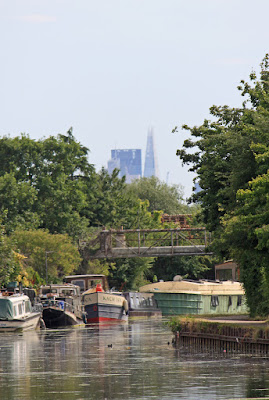 Fake sailing barges and The Shard

We started to look for a mooring at about 5.00pm and in the end had to carrry on for another 40 minutes to Hackney Marshes which are possibly not the most genteel place to stay, but there are lots of other boaters around so there is safety in numbers. A 50 foot slot presented itself and once again I was grateful that we are articulated and able to bring the butty round to the outside - short spaces are easier to find than long ones. Its also safer to have the butty out of reach of prying fingers.

We rounded off the day listening to the radio as Andy Murray made hard work of getting through to the second week of Wimbledon.

Weed on the Lee is not usually a great problem. Until Bow Locks were altered in 2000, the tide in Bow Creek would top the gates and thus the stretch below Old Ford Locks including Limehouse Basin was semi-tidal. By holding the gates open when the tide turned, the lock-keeper could flush-out the navigation.

At one stage, there was a guillotine in Limehouse Cut to maintain the level in the Basin and some signs of it remain. But I don't recall it in action when Dad kept a boat on the Bow Backs in the 1970s. At that time, there were still coasters and foreign ships in Limehouse Basin – some carrying scrap metal away. There was reasonably active timber trade on the Lee and even the Regent s (Hackney has a history of furniture manufacturing) in dumb lighters – much of which seemed to fall in the river on unloading so you could pick-up lengths of sawn softwood, if you so desired. There was also a period when copper sheet was moved up-river in connection with a sub-station (or some such) programme. The lighters would then be set very low in the water – but when you peered in the hold, there seemed to be no cargo.

The history of Limehouse Basin and its associated locks and cuts is very interesting; further investigations might help moderate your obsession with the BCN.
Are you coming out of Limehouse or heading or taking the Regents Canal?

ThAnks for the insights Ian. We don't have the nerve to tackle the tideway with the butty so we are back in Paddington having travelled the Regents.