All stop and finished with engines

Back to Longwood
September 2017

This really is the end of the line. Martin joined me on Monday morning and together we moved the boats through Whittington and Hopwas to Fazeley where we used the water and elsan at the ex CRT premises at Peels Wharf. A notice informed us that the property had been bought, but it all looked shut up and empty. I did wonder if the water and elsan points would continue because having slops emptied on your premises wouldn't be everyone idea of a good neighbour. 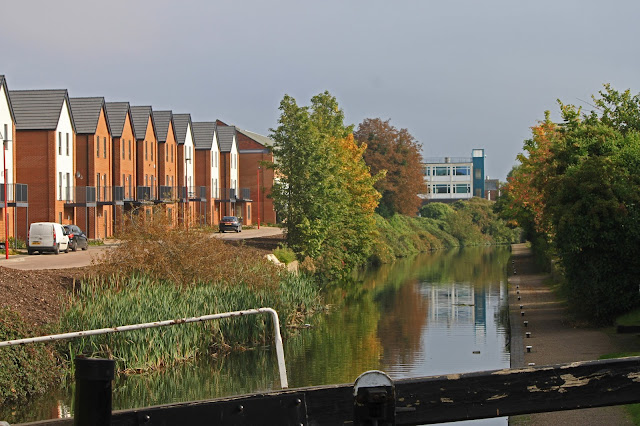 
Then it was up the Birmingham and Fazeley Canal to The Dog and Doublet, mooring up with time to pick some sloes before tucking into some steak and ale pie to keep us going. On reflection its better to moor below the lock to so have the benefit of a noise shield because the nearby motorway is a bit loud above the pub. 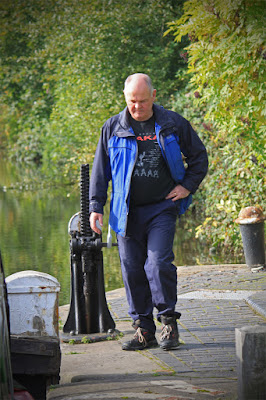 My crew for the trip home

We consulted the map and decided that even with the butty in tow, it was possible to get back to Longwood in one long day. That meant the alarms were set for 6.00am and we were on the move before 7.00am, passing through the first of about 35 locks leading to the Wolverhampton Level at Aldridge.

Whilst we started out in thick fog, with the Curdworth Tunnel emerging from the mist, it had all burned off by 10.00am and then continued in glorious autumnal sunshine. Locks and miles passed and we soon found the fields of Bodymoor Heath giving way to the urban sprawl of Minworth and the ongoing redevelopment of the Cincinatti Milacron site. 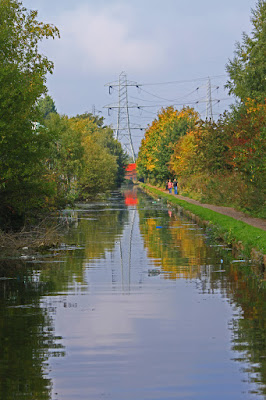 At Spaghetti Junction we veered off the bustling mainline (we had seen 3 boats) and started into the remote "northern reaches" via the Tame Valley Canal. This canal was one of the last to be built and shares many design features with the Shropshire Union, including some spectacular cuttings and  embankments. The big obstacle is the Perry Barr Locks which are generally well maintained but are used so little that many have sides covered in hanging foliage. 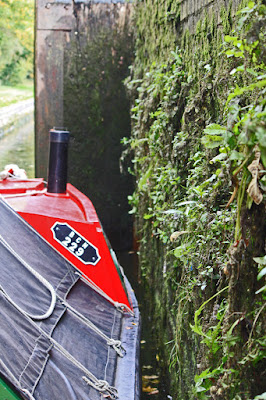 By rights the area at the top of the locks should be an ideal place to pause for the night. There are several houses nearby and CRT offers rubbish bins, toilets and even showers. I popped into the block and was staggered by the cleanliness, I doubt that they are used very often. I think that there is an elsan point but the door has been painted recently and I couldn't get it open without resorting to a screwdriver from the boat. The big downside is the unfortunate tendency for criminal activity. Only last month a new boat arrived at Longwood with its  windows smashed having been left unattended in the area for a couple of hours. 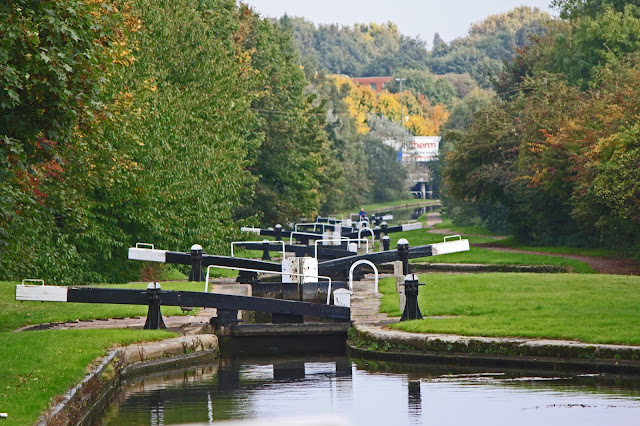 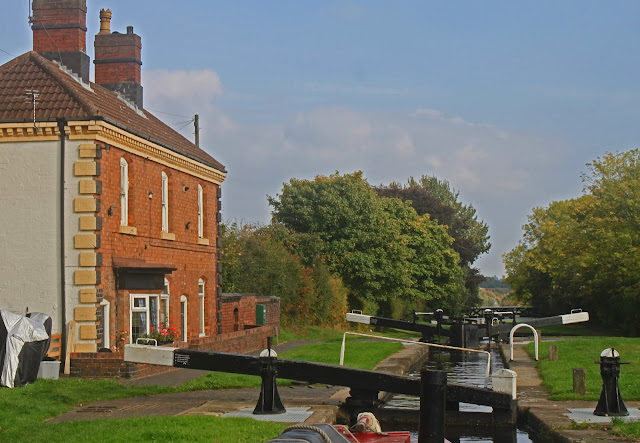 Then you are into the spectacular cuttings and embankments in the Hamstead area, one minute enveloped in a tunnel of trees with bridges soaring overhead, and then you are flying above the rooftops with views over Sandwell to the hills of Dudley. This is unmistakably a BCN waterway, with its distinctive narrows built for the collection of tolls. It's impossible not to feel a touch of the pioneering spirit when towpath walkers observe that they havn't seen another boat for months. We passed at the end of the school day and were more than a little relieved to leave the footbridges behind us. 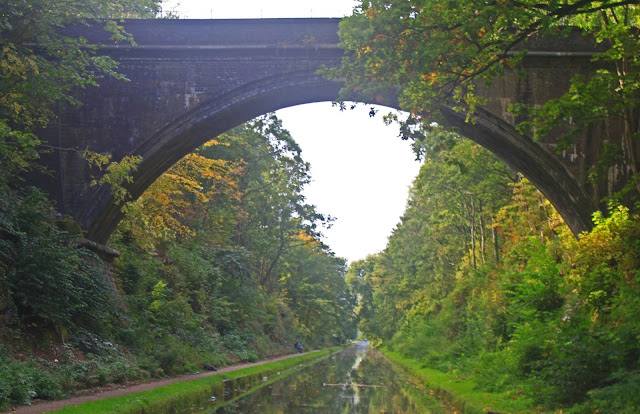 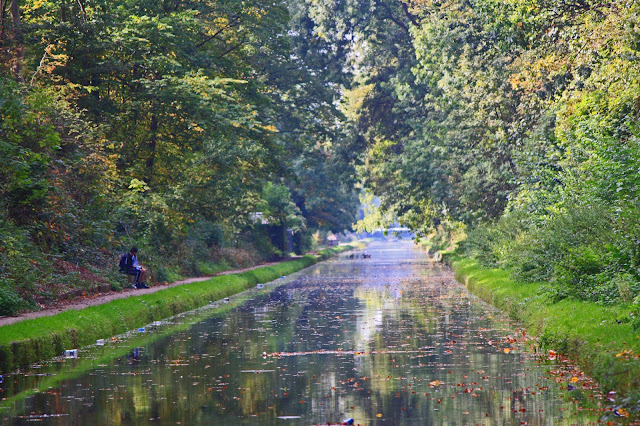 The cool of the evening was upon us as we turned into the Rushall Canal and the last three miles of our journey. The canal became narrower, shallower, and more weedy with the navigation channel just a little wider that the boat. You have to keep the the centre line or you are in all sorts of trouble. 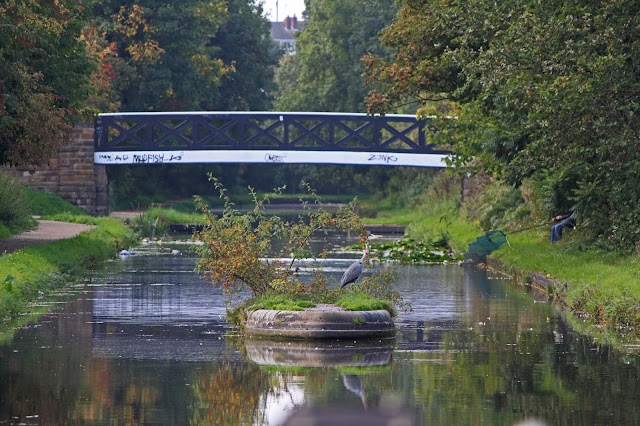 The Ganzies started well enough with all the locks set in our favour, as had the Perry Barr flight. In truth I think most of the locks leak empty. 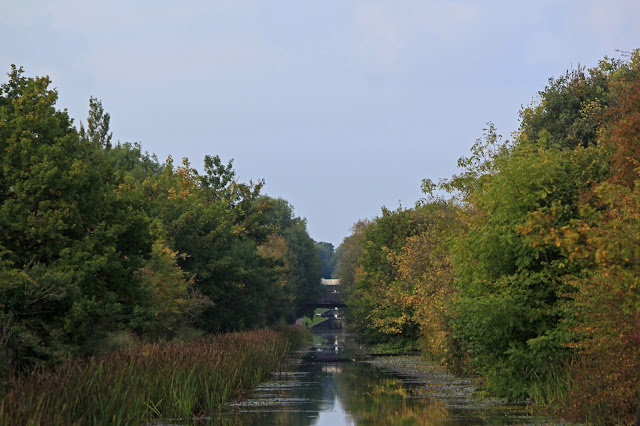 But then we reached lock four and it all went to pot. This lock in a cutting is tricky at the best of times, with its lopsided subsidence meaning that the gates always close by themselves - more a problem if you are descending single handed. We entered the lock and found that in spite of their habit of self closing, the offside bottom gate wouldn't close. It would swing to within 4 inches of the bottom liner but there is jammed. We opened and closed, closed and opened and after an hour of prodding around we called CRT for assistance with a keb. We had a cup of tea and with darkness approaching we were about to pull the boats out of the lock and wait for the light tomorrow. But then I rattled the gate in frustration and it juddered into place, more or less. 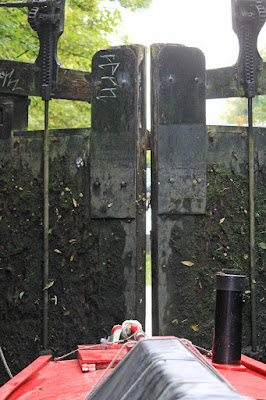 A gap too far

We didn't mess with the gate again so filled the lock as fast as possible and got out at the top before calling CRT with the good news. Only today I met another boater who had come up the flight and had problems in three locks one of which necessitated CRT support.

The light had completely gone as we set out on the mile pound, a straight and shallow waterway which is so full of lily pads that you have to creep along the centre, no easy task in the pitch black. The two top locks aka The Moshes were ascended in the dark and we abandoned the boats at the boat club two hours behind schedule. 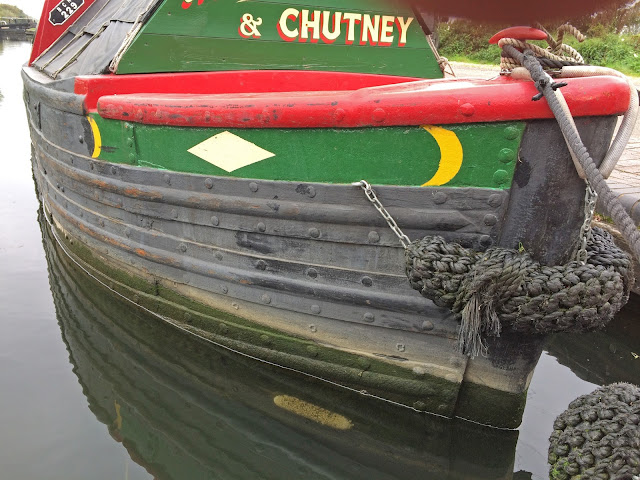 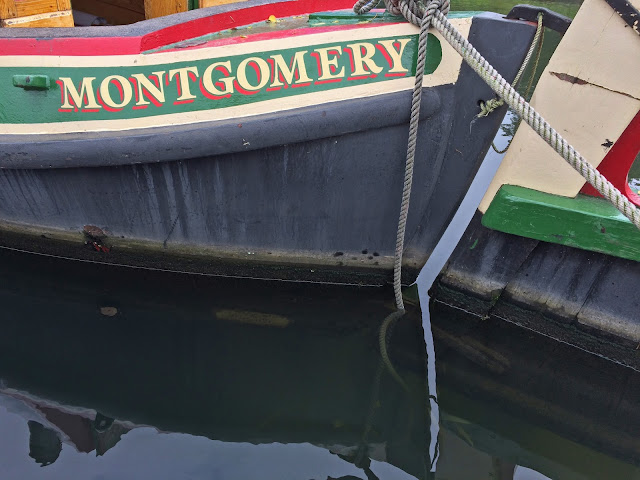 The butty relieved of its load

The following day was spent shuttling between boat and home, moving the huge amount of stuff back to our house for the winter. Removing all that weight from the butty over the past few weeks has revealed a line of Thames weed, and by the end of the process this was nearly 4 inches wide at the front. No wonder it was hard to tow at the start of the season.

And there is one final twist to this tale. As I moored the boats up for the winter I checked over the engine and when I tried to start it again - nothing. No lights, no alarms, no starter motor. Its as though there is no starter battery at all. All the connections seem ok so maybe the old starter battery suffered a complete collapse, odd but at least I have 6 months to sort it out.
Posted by Andy Tidy at 8:28 pm

We have moored overnight at the top of Perry Bar locks several times without any problem at all. However we wouldn't leave the boat unattended.

Marty, I am with you on that. You have to pause at some point on the trip so its either there of at the bottom the the Rushall flight.

I once had a car battery (a good quality Exide, IIRC) die without any warning. It started the engine perfectly when I left home, but wouldn't even bring the ignition warning light on when I went back to the car later the same morning. I surmised that one of the internal links must have fractured during the drive. Fortunately, a set of jump leads got it started, I wound the idle speed adjuster in a little bit (the joys of a simple SU carburettor), and drove home taking extra care not to stall! Typically the battery was only two weeks out of the 3 year warranty...