Another beautiful morning of spring sun set in a cobalt sky. We woke at 7.30am but lit the fire and lazed around till 9.00 am and so didn’t make it to the lock till 11.00am. 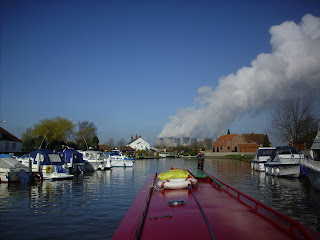 We searched high and low for the lock keeper but whilst the office was open there was no sign of him. After 15 mins we gave up and locked ourselves out not withstanding the red lights, but left a note on the capstans telling him our direction of travel and eta at Cromwell. 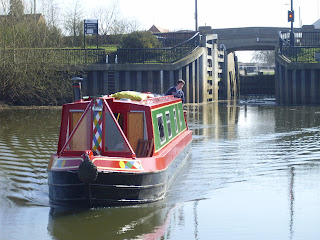 It was immediately apparent that there was more fresh in the river and absolutely no sign of a flood tide to assist out passage. As we entered the flow from the lock channel we slowed and resigned ourselves to a slow plod up river. I had watched a few boats punching the current as we came down river but conditions were now much, much worse. As we moved up river the water level rose and rose till it covered the meadows between the river and the levees and made sense of the marker poles on the apex of each bend. With all this fresh we didn’t have to worry about the sunken islands at Normanton, as they passed about 14ft beneath our keel. We managed less than 3 mph in these lower reaches and on some of the narrow bend and under the bridges we barely made any headway at all, even with the throttle wide open. At times the current slowed us to 1mph against the bank whilst doing 7mph over the water. With so little margin for error it all got rather scary, particularly as we had to hug the lee of the bends to find slack water, at same the time watching out for the big gravel barges which passed us on the downstream run from time to time. 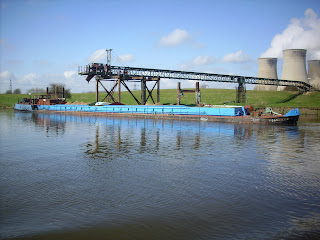 We also passed two gravel barges which swept past majestically, closely followed by two narrow boats fairly flying along at tickover with ashen faces skippers grimly clinging to their tillers. 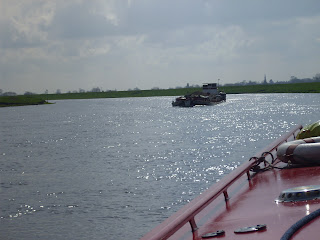 It was with some relief that we finally caught sight of the green light shining from Cromwell lock and then noticed the state of the adjacent weir. What has been a 2ft trickle a week ago had turned into a 12ft torrent and the river status bar was worryingly close to the top of Amber. 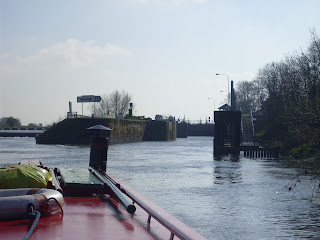 As we entered the lock it was apparent that our message had been passed on and our arrival was anticipated. We were the only narrowboat to attempt the passage that day although a big sea going cruiser would follow up later on. There are times when Jeremy Clarkson’s, “you cant beat raw power” approach makes a lot of sense. 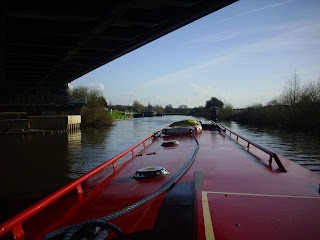 Nether Lock was navigated without difficulty and we returned to the same pontoon and the same Springer nb Verity that we encountered on the way down. The family were out for 6 weeks from Keadby and were very happy to chat and share a beer and watery tales. After another trip to Waitrose we settled down to the final two episodes of Life on Mars – Series 1.
On reflection, the boat behaved brilliantly in spite of the strain placed on it, dashing from eddy to eddy, never missing a beat. All the fast travel did highlight a leak in the weed hatch seal which resulted in several inches of water in the bilge but apart from that everything worked perfectly and gave confidence for future long distance, and possibly salty, passages.
Posted by Andy Tidy at 11:02 pm