We had delayed start from Calf Heath which involved a return to home to collect the overlooked pile of Easter eggs. Sadly that wasn’t all we had forgotten, it later transpired that we had overlooked a key to feed the Guinea Pigs and Tilly’s school shoes, which are an essential element of her boarding school uniform. However, this omission was not spotted till long after we had passed the point of no return. 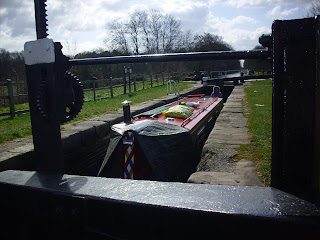 Whilst the trip down the Staffs and Worcester to Great Haywood covered familiar ground, the weather was far from normal with strong northerly winds bring with it an assortment of wintry showers and squalls of hailstones (which Jeff loved). 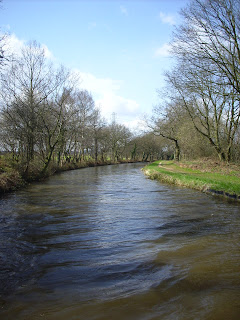 Predictably, very few boats had ventured out and we made good time, arriving in Great Haywood at twilight after 7 hours of cruising. Sadly the fish and chip shop which I had promised proved to have been something of a mirage of my imagination and had mysteriously metamorphosed into newsagent, so Belle resorted to pasta and sauce which was followed by 2 episodes of BBC’s Prehistoric Sci-Fi series, Primeval. We moored up just below Gt Haywood Lock, out of the howling gale and beside the upper reaches of the Trent, which was to be our companion for the next two weeks.
Posted by Andy Tidy at 10:37 pm