Our four day schedule to Nottingham allowed us a morning in Alrewas and a quick perusal of the church notice board gave us the option of a 9.00am traditional service or a family service at 10.00am. With two teenagers to entertain the family service seemed a safer bet and we had to admit that the Anglicans do a good job on the festival services. This service featured the bishop of Wolverhampton no less who somewhat unnervingly looked very much like my brother! The service concluded with Easter Eggs for all attendees, small ones for the adults and larger cream eggs for the children. Jeff (14) apparently qualified as a child under cannon law, but Tilly (15) appears to have made an ecumenical transition into adulthood which, on this occasion, didn’t impress her too much!

Belle excelled herself with a ship board Easter Egg hunt, which was as successful as its wider ranging garden based hunts which are a traditional part of our family life. From here on our days journey started with a bang - the bang being a big old working boat crashing into the boat moored behind us. Unfortunately that wasn’t all it hit. On its way out of Alrewas lock it also hit the upper gate hinge, shearing off the retaining collar. We arrived to find several boats piled up and the lock gate jammed open. BW had been called but a fix on Easter Sunday seemed unlikely so, being a second generation boater brought up in an era then a crowbar was an essential boating tool, I decided that a Heath Robinson approach was called for. I strapped the hinge with a mooring rope and swung the gate on this makeshift fulcrum. Much to the surprise of the waiting boaters my lashed up solution worked and we moved half a dozen boats through, ourselves included. The remaining boaters didn’t seem too keen to replicate my effort for fear of the gate falling off and it appears that ours was the last vessel through for the day. I guess the lock remained closed till BW came to the rescue and applied the shiny new hinge which was in evidence on out return 10 days later. 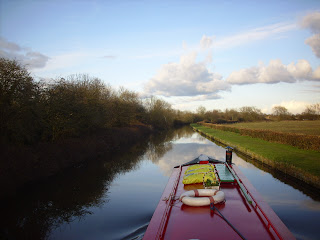 It was a relief to see the river section at Alrewas comfortably in the green zone, which boded well for the rest of our trip south after Nottingham. The next section runs alongside the busy A38 which LTC Rolt found so objectionable when he passed this way in the late 1930’s. At that time he complained of vehicled hurtling along at 50 or even 55 miles an hour – what would he say to dual carriageway with cars approaching 100? The T&M weaves back and forth, flirting with the A38 all the way into Burton where we passed a boat coming up and being amazed at the narrowness of the locks. From here on the canal moves to broad guage and becomes more and more remote, with steel piled banks giving way to reeds and shallows at the margins. This remote section has a quality similar to the Chester Canal north of Northwich. 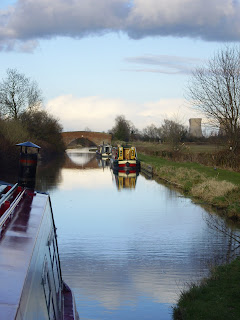 We moored at Stenson where we had a fantastic roast, thanks to SS. We gave the Bubble (pub) a miss and settled down to more Primeval, having first fitted the anchor to the stern ready for the next 10 days on the river. The newly built A50 does intrude on this location with the drone of road noise being audible but not unduly intrusive.
Posted by Andy Tidy at 10:42 pm