Farmers Bridge Locks then and now


I love old photos of the BCN and was fascinated by a series published in the July edition of Canal Boat. The photos were taken by an obscure character called H R Hodgkinson and the item was pulled together by Hugh McKnight.
The photo which really caught my eye was 1913 image looking down the Farmers Bridge Locks. The narrative didn't specify which specific lock it was but I took one look and thought "I know where that is - it's lock number 13 at the bottom of the flight. The configuration of buildings surrounding it is unique" 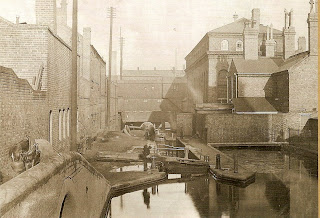 Farmers Bridge 1913
I found myself in the centre of Birmingham the next Saturday with half and hour to spare, so I took my camera and the copy of the Canal Boat article, and set off to try and recreate the image. I arrived above lock thirteen and was stopped in my tracks. Yes, the configuration of buildings was about right but the view was partially obscured by a huge railway viaduct - which may post date the canal, but was most certainly present in 1913! What was more, the buildings surrounding the lock were not quite right and no amount of tinkering could have transformed what I saw in the black and white image into what lay before me. 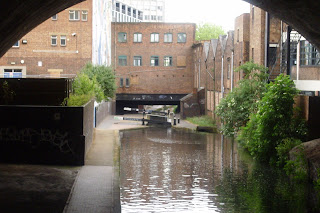 Nearly, but not quite
With the wind rifling through the pages of the the magazine I took a closer look. There was a small brick bridge over a side entrance just before the lock and then, after the lock, another towpath bridge with thin cast iron railings giving access to yet another arm or wharf.
I retraced my steps looking for evidence of these telltale structures and much to my surprise, found them. The brick bridge is located between locks eight and nine - once providing access to a substantial warehouse which now stands alone in a redevelopment bombsite, it's bricked up boat access arch plainly visible once more. The cast iron bridge also remains just before lock ten. 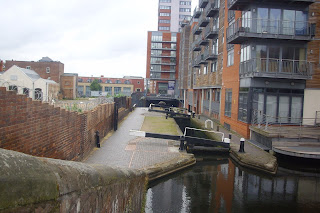 Got it!
But of the surrounding area absolutely nothing remains. The once thriving Elkington and Co's electro plating works is long gone and now replaced with swanky new apartments . I couldn't event get an exact duplication of the photo due to the construction of a modernistic footbridge over the canal, one end of which is is keyed into the span of the brick accommodation bridge. 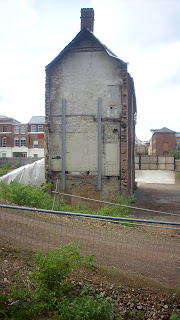 The old may have passed away but the preservation of the canal warehouse is encouraging. I guess that it is too much top hope that the 100 yard strip of canal could be reinstated, taking water right back into the building?
Posted by Andy Tidy at 7:00 am