The Anson Branch canal terminates at Reedswood Park, site of an abandoned coal mine. 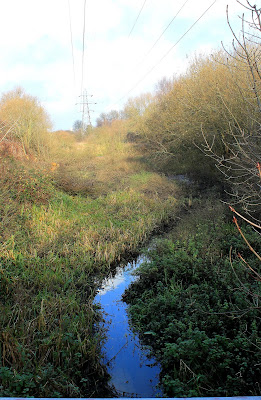 The canal remains in water, running along the estern edge of the park and terminating in a large reed filled basin. A short walk to the north reveals a substanbtial reservoir which continues to feed the canal via a large concrete pipe. 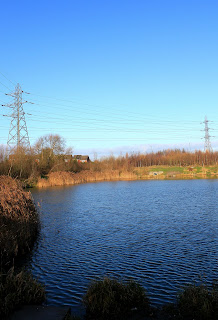 Mid way along this section an impressive arm leads off to the east with a bridge carrying the towpath over the entrance. Whilst the basin beyond the bridge is in water, the entrance itself is reeded up to the point that it is possible, with a little care, to walk across the entrance. Strangely, the whole basin is railed off whereas access to the equally dangerous canal is easy to reach. Probably health and safety gone mad, as usual.

The park is surrounded by cast iron railings, which probably date back to the days it was a colliery. 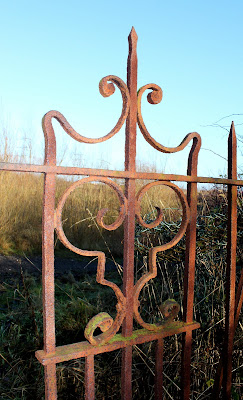 John B
I have just come across this site. I was born on Pleck Road and am now getting on in years. I have just seen the pictures of the Reedswood Anson branch of our canal system. I knew this area like the back of my hand! In the 1940 early 50`s, from Reedswood [Bentley] near the end of the canal we used to hire rowing boats for 2d an hour for kids from Tom Pearsall and used to row along this canal to where the canal turned orange from the Copper works discharge [killing all the fish]. The Anson canal was destoyed with the alteration of Wolverhampton Road Bridge to make way for M6 Traffic. Frank Parkers farm was approximately where the motorway island is. The space between the island and Alumwell school was farmland where we picked spuds for Parker.
On the right at the Reedswood end of Anson canal just inside the Reedswood Park fence was the open air swimming pool [now gone] - mostly not used during WW11 so us kids used to squeeze between the railings and join the frogs in the water.
Bentley common, the quarry, canal, the 'leg of mutton, The Square and Three Perch pools, the burning railway embankment tip' were the haunts of my childhood never to be replaced - destroyed forever by the building of Gypsy Lane estate [Beechdale] and by the biggest motorway bottleneck cock up in the whole of Europe - the M6!

I've really enjoyed reading about this branch of the canal.
I grew up in Reedswood (I'm 47 now). My late father Derek used to help Tom Pearsall on the rowing boat trips. Unfortunately I didn't find out about his time on this part of the canal until after he passed away in 2011.
Many thanks to John for his comment - it's likely he would have know my dad.

I have many fond childhood memories of this area. As a child I lived in Moat Road until 1966. I was 11 when my family moved house to Lichfield. My grandparents lived in the last house before the canal at 249 Bentley Lane.At the time this house had a large garden and field which today is housing.

The canal was always a great attraction and we as children were warned to keep away from the "cut". I remember going netting newts in the "Red River" just down from Forrester's Cottage which was situated at the terminus of the Anson Branch. You could basically swap your mom and dad's house for a red bellied newt if you could actually catch one.

I remember in the Autumn the Gipsy's camping by Forrester's and we were warned to keep away from them. However we used to go and hide in the grass behind the Reedswood Open Air Baths to see if they really did catch and eat hedgehogs. We were surprisingly disappointed as we never witnessed this happening. My grandfather Mick Gilbert, who loved his garden and apple orchard, pulled several youngsters (who had got into difficulties swimming) out of the canal by the Bentley Lane Bridge in his time I am sure these were the same children who scrumped Grandad's apples and plums.

Every few years the canal would be dredged and loads of silt and mud would be removed from the last hundred yards of the canal. Infact one year possible 1963/4ish someone thought it good idea to drive the dredging crane into the canal as an act of vandalism. The debris from the canal was mainly taken away in large lorries but some was just dumped on the canal bank. I remember finding a pint drinking glass engraved "Victory Cave" pub one day after looking through some of the muddy deposits. The Victory Cave pub was further on past the canal end heading towards Beechdale Estate on the right hand side of the cinder path. The pub was demolished in the 1950s I think. That glass must have been thrown into the canal and stayed there until the early 1960 when it was dredged up.I still enjoy a pint at home from this same glass. In the mid sixties the M6 Motorway was under construction and I remember watching the building from my classroom at Alumwell Road Primary School. One aspect of this construction was that large amounts of plywood shuttering and big section timber used for concrete work on the Wolverhamton Road Bridge were thrown into the canal. This was like finding gold to Grandad who spent weeks if not months transporting this wood from the canal bridge near the Wolverhampton Road to Bentley Lane on his wheelbarrow along the towpath to his field. He ended up with a mini woodyard which was still there complete never touched until he sadly passed away in 1978. Great memories.