Jake and Elwood Blues, Tribute where it's due

Jake and Elwood Blues – Tribute where it is due

I took Jeff to see Jake and Elwood’s Christmas Party at Birmingham’s National Indoor Arena on Sunday, or at least the end of it that represents the NIA Academy. By way of a contrast I also experienced ‘Thank you for the Music’ last month with Tilly in Derby, a performance featuring the ‘BeeGees and Abba’, so I feel that these two encounters with the tribute genre provide sufficient perspective to pass comment. 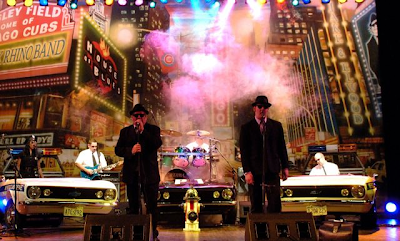 Jake and Elwood with the Black Rhino Band

The artists at both events threw themselves into their roles with passion, delivering very convincing performances. Jake & Elwood had Belushi & Ackroyd’s act down to a tee, including the cartwheels, the excessive beer consumption and those strange robotic movements which characterised Elwood’s stage persona in the classic 1980 film The Blues Brothers. The ‘Bee Gees’ and ‘Abba’ were similarly accomplished, producing sounds which were uncannily close to the originals.

And it wasn’t just the artists. The audience threw themselves into the event, overrunning the NIA with middle aged men in black suits, white shirts and a myriad of pork pie hats. To say that Jake and Elwood were singing to the converted would be an understatement!

So what is a tribute novice to make of it all?

Well, firstly I have to question if it is fair to classify Jake and Elwood as a tribute act, as the original Blues Brothers band only existed in the celluloid world of Hollywood but hey, that’s semantics. I really like Abba, the Bee Gee’s are ok in modest doses and I can’t get enough of the Blues Brothers, my favourite film of all time, so the shows had great entertainment potential.
In reality, the sound is there, the moves are there, even the ‘in character’ patter is there, but somehow there is still something missing. In the end I concluded that even on their very best days, a tribute act can’t be as good as the original artists were at their worst. But a strange phenomenon was apparent within these performances. After the initial ‘wow, they sound / look realistic’, and a subsequent period of scepticism, you find yourself being swept along in a tide of nostalgic good humour. We know that they aren’t real, they know that they aren’t real buy hey – it’s a whole lot of fun, so let’s sing along and enjoy ourselves for two hours of make believe.

Tribute bands do have their place in the musical constellation, letting us experience the music of the stars in a context similar to the original. And yes, they may be a mere echo of what went before, but so what. In the midst of these dark times an echo is better than silence.

I will finish with a quote from The Reverend Cleophus James (Brown):

Life is too short to take everything so seriously. Jake and Elwood are all about fun and when you get right down to it you have to remember that ‘they are on a mission from God’.