And so to Banbury

I have been slipping with my blog posts a bit recently, but that is mainly because we have been on the move and I have spent a fair bit of my writing time working on a couple of articles for publication. 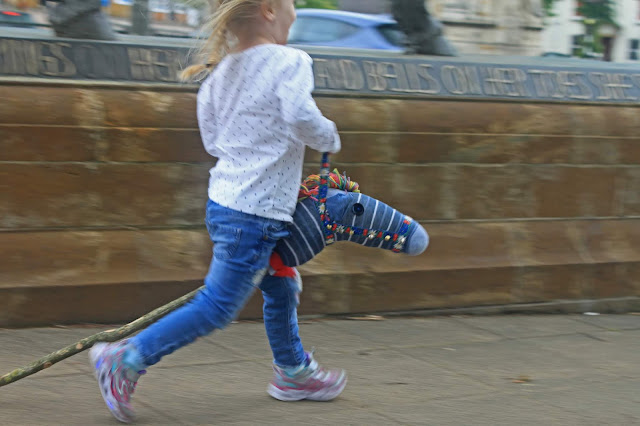 I have to admit that I really like the Grand Union between Knowle and Wigrams Turn. The canal is broad, deep (ish) and relatively little used. The one snag to the route is the locks - they are all the big wide locks which were installed in the 1930's replacing the narrow ones which still stand empty and folorn. There are times then the heavy gates and heavy paddles are a bit much and I wish that the little locks were still operational.

Actually, there is a second snag to the route - Elsans, or the lack of them! There is one on the Saltisford Arm, but is it was a bit of a walk I relied on the one on the offside, three locks up at Fosse Road Bridge. We arrived only to discover it is deliberately out of service, filled with sand by CRT because of risks to the staff who have to empty the cess pit. I am guessing that they have to park the tanker on the very busy road, and this is clearly risky. But that means that there are no canalside elsans from Hatton top lock to Napton bottom. Frankly, if this facility is removed I cant see why a couple of temporary "cubes" cant be provided in all the lockside space at Bascote. 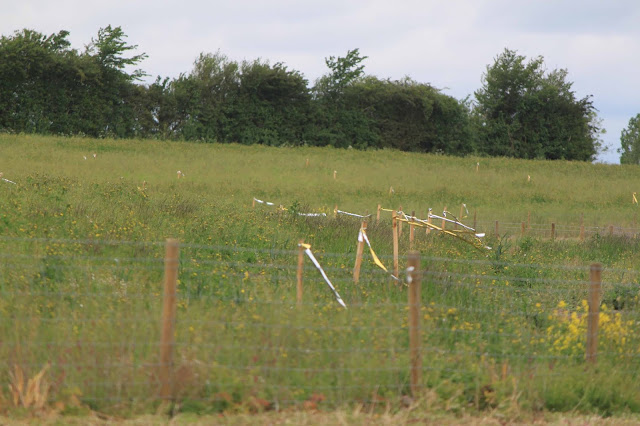 Anyway, off we went up Stockton Brook where we paused to pick up another boat so the rise up the hill was very painless and instead of stopping at Calcutt, we went all the way up the Napton Flight and moored for the night somewhere way out on the Wormlington Summit above Marston Doles. 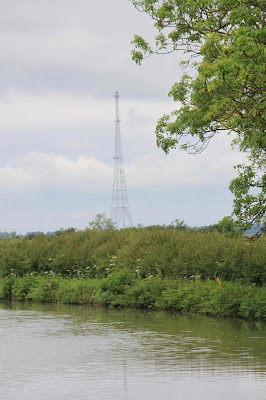 It turned out that we moored on the edge of the area marked out for the new High Speed Rail track. The adjacent meadows were covered in posts with streamers attached, presumably to scare nesting birds. I was a bit shocked by the area staked off and wondered if this was some sort of construction marshalling yard rather than just the track bed itself. I guess that this will be the last time we can enjoy the other worldliness of the summit and in future it will be earth movers or screaming trains. 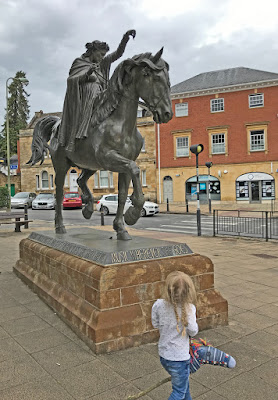 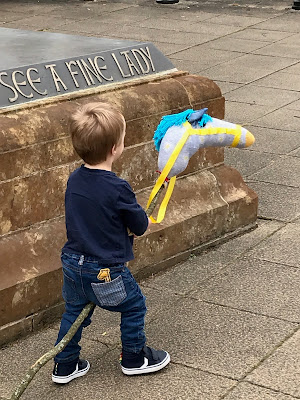 We had friends heading north on the Oxford and we had been maintaining daily contact to see where we would pass. It became apparent that we would meet at Fenny Compton so we both stopped and had a long awaited cup of coffee together. I love the way these meetings happen on the cut. Then it was on down the hill through Cropredy where we spent the night.

Now we have crossed onto the Thames catchment basin our progress has slowed. We have shelved our plans for the K&A this year (again) and will instead make a leisurely trip down the Thames and back up the GU. But before we get to the river there was Banbury, the only significant town between Leamington Spa and Oxford. Our grandchildren love singing "Ride a cock horse to Banbury Cross" so Helen made a couple of hobby horses which we presented to them.... at Banbury Cross. They loved them and galloped around the Fair Lady for about 15 mins before raising lots of smiles as they cantered back to the boat at Castle Quays. 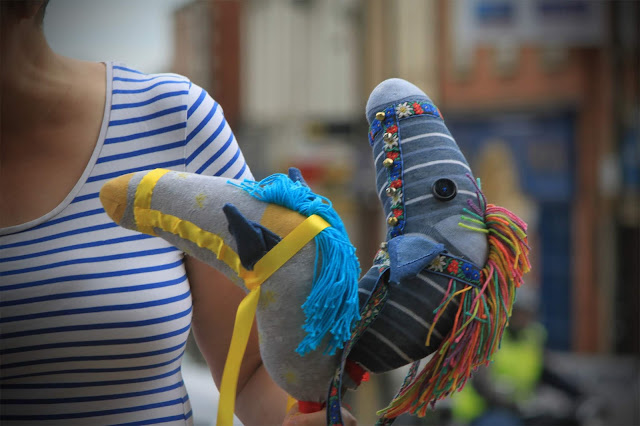 Now previously Banbury has been rather a good trading spot for us, but not this time. Banbury is in the throes of a make over spanning the multi storey car park and Spiceball Park. As a result the middle foot bridge is closed and there are few people using the towpath. What we lost to trade was made up for with two peaceful nights in what can be a noisy mooring.