We spent a quiet night nestled into a secluded little hollow at Bourne End, an improvised mooring we have used in the past. It's a lovely spot out of the current but is slightly marred by a collapsed underwater wall which pushes you away from the bank. If you get it just right you can get the stern in near enough to hop on and off but you have to accept the the bows will be well out. 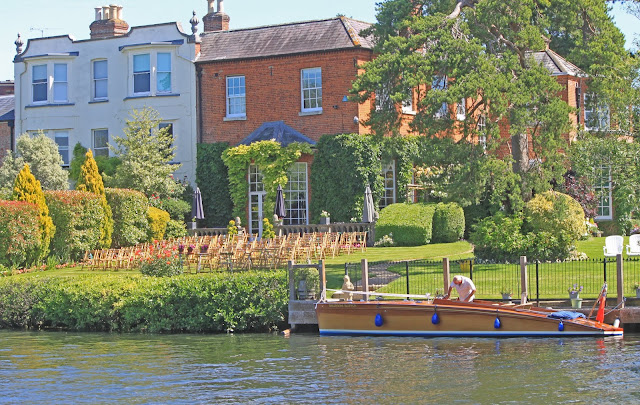 We were slightly concerned that a music system was being tested i the garden of a house opposite, but it turned out that it was part of a wedding event taking place the next day. It certainly looked a splendid location with the Thames as a backdrop. The next sections of the Thames are some of the most beautiful, particularly Cliveden Deep, but there was little tranquility this time. Hoards of boats were racing from lock to lock and inexperienced crews seemed intent on overtaking us on the bank side, as though we were in cars.

Saturday was an unusual day with wall to wall sunshine, so strong it had me reaching for the sun cream. Truth be told I don't like so much sun and generally prefer the protection of some shade. 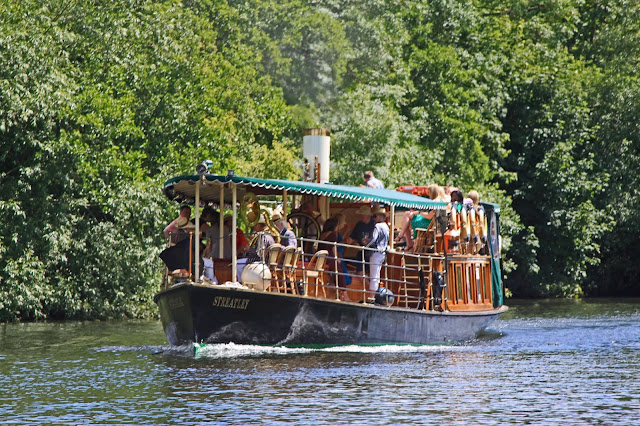 As the day progressed the volume of boats on the water grew and grew. By the time we reached Windsor it was mayhem with boats large and small milling about everywhere. Things reached epic proportions at Boveney Lock where a steady stream of inexperienced Eaton rowers were pulling out from the portage slipway. It was here we had our first collision in ages. We were following a cruiser into the lock landing jetty and at the same time avoiding a rower when another narrowboat decided to make a dash for the bollards and cut us out of the queue. I asked for the water but he wouldn't slow so I simply made use of the weight of the butty and slewed into his bows, forcing him back. It dosn't do to play chicken with 25 tons. Among the mele of boats we did see a friendly face in the shape of John Hammond and the much travelled Muskrat. The boat has been repainted but its good to see that he is still sporting his unique garden at the rear! 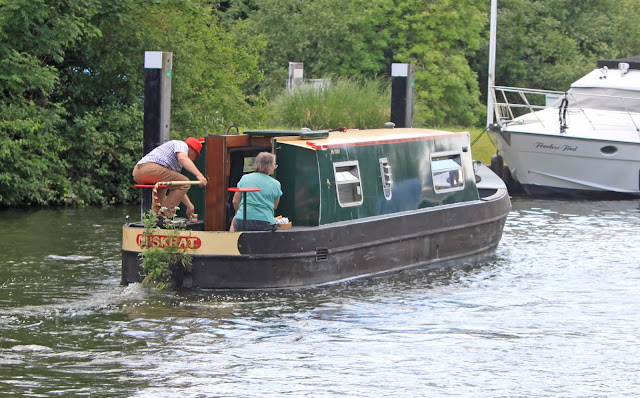 Anyway, Windsor moorings were rammed, as you would imagine. Rather than look and fail to find a mooring on the meadow opposite the castle, we saw a gap on the north bank just after the rail bridge. As we approached we were warned of an underwater obstacle which was another fallen wall. As with the last night we managed to get the stern against the bank and left the bows out, and overnight we managed to get hooked on the ledge causing a slight but noticeable lean.

Windsor is famed for its over enthusiastic mooring warden. During past visits he had managed to come over in his boat and demand payment even before we were moored up, all delivered in a very belligerent manner. As I moored up I was assisted by the boat upstream of us and I wryly observed that I has set my stopwatch to see how long the ranger would take to get us.  Nothing happened till 7.00pm and the long awaited tap happened on the stern. It turned out that the mooring warden had changed and our neighbour was his replacement! 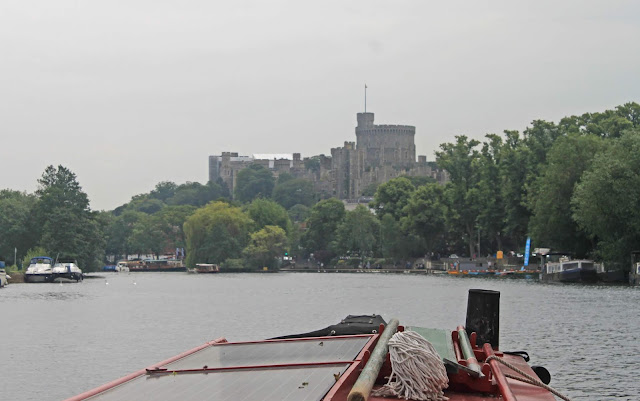 The new wardens are delightful, a husband and wife pair who winter in India and summer in the UK, and they take a friendly and pragmatic approach. Its is a good news story in term of customer service but offers little in the way of tales to tell during lockside conversations.

Sunday was the relatively short hop down to Staines. First it was past Windsor Castle and then past Home Park and the Crown Estate land. The Heathrow flight path crosses the river at this point and the noise becomes deafening. Then it's on through Runneymede and the number of plastic boats lessens, and those we do see become less flamboyant. This trend can also be seen in the riverside houses which were beyond opulent upstream but now they become much more "normal". Truth be told, I find a lot of those insanely grand houses all a bit much. It's hard to imaging them being a home.

With Staines comes the M25 and inside the motorway we know we really are closing in on London - now about 25 miles away.

We stopped in Staines on a free mooring site, mainly to let Helen get to a Hobby craft. We did think about going to the Vue Cinema as its very close to the river, but there was nothing on we wanted to see. Instead we settled on a Gourmet Burger followed by a speciality ice cream parlour.