The Queen routinely bestows honours on her faithful subjects, sometimes the rich and famous but at other times on the more lowly and unrecognised members of society. It's this second category that attracts my attention, unsung local heros or faceless civil servants who have delivered over and above the call of duty, people like Dame Shiriti Vadera, now infamous for her widely reported but misunderstood "green shoots of recovery" comment.

I may not be the Queen, but I would like to award an honour - to the propeller of Wand'ring Bark. It sits down there in the murk and the gloom year after year, springing into action at a moments notice, and withstanding all sorts of abuse as it has it's close encounters with canal bed debris. It's truly remarkable that it survives at all, and yet without it I couldn't move a single inch.
Not all propellers survive unscathed. Here's a picture of The Robber Button's after a really close encounter with submerged masonry: 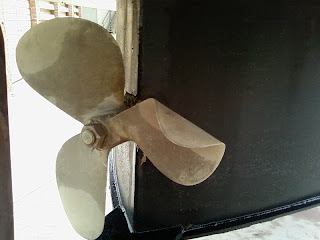 Ouch - that's got to have hurt!
In truth, I have never actually seen Wand'ring Bark's prop. It replaced a smaller one which was taken off a couple of years ago when WB was out of the water for blacking. However, I feel I maintain an intimate relationship with the current incumbent of my propshaft, having spent many hours with my arms wrapped around its three blades, cleaning off a broad assortment of detritus (mainly from the BCN).

So there you have it - a reasoned rationale for awarding an honour on my unglamorous but indispensable propeller.

Why did I change it? Well, the old 16 x 11 unit caused the engine to over rev and a reasonable cruising speed could only be maintained with an engine speed of over 2000 rpm. The new prop is a 17 x 12 which dropped the revs to 1600, reducing engine wear, fuel consumption and associated noise levels. It also gave WB a better top speed which came in handy when we punched the flood current on the Trent last Easter. 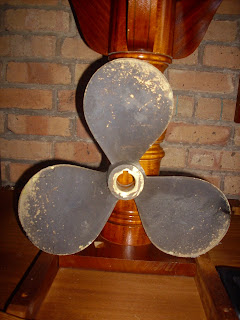 For the technically minded the first dimension refers to the diameter of the prop (in inches - none of this metric nonsense) and the second refers to the pitch, which is best imagined as the forward travel of the prop in one revolution when submerged in a tank of soft butter! As with other things in life, size does matter and an extra inch here and there can deliver significant added satisfaction....

My old prop remains perfectly serviceable and is currently sitting in my garage going nowhere. If you could use it, it's yours for £50, but you will have to collect it from Birmingham cos it weighs a ton.

On the subject of surplus boating bits and bobs, I noticed that Mortimer Bones had a basin going begging and it made me think that lot's of boaters must have old stuff lying around, which could usefully be recycled if only a good home could be identified. If you have any boat related stuff cluttering up your shed that you want to get rid of, let me know and I will post a photo and description of it on a new "Captn Ahabs Marine Mart" page. That's my bit for a greener recycled Britain.
Posted by Andy Tidy at 4:03 pm