A 9 mile return journey along the towpath, including the Nightingale / Lea Wood Arm 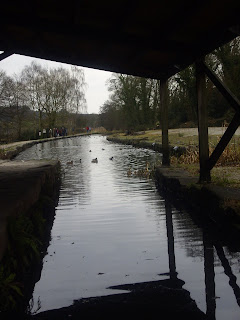 The narrow (7ft) Cromford Canal has a long and illustrious past, connecting Richard Arkwirght's Cromford Mill in the north with the Erewash's Langley Mill basin 16 miles away in the south.
The main section of the canal took five years to build and was opened in 1794, having cost twice as much as predicted. The waterway was an overnight financial success, paying the investors massive dividends and making it something of a Dot.com boom of the 19th century. The freight traffic was so heavy that the Butterley Tunnel was obliged to work 24 hours per day to cope - if you take a look at the waterway today it is difficult to visualise where the demand came from. 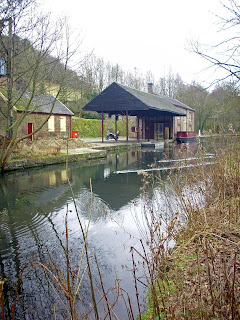 Whilst the trade in coal, coke and limestone was very good for many years, volumes halved between 1840 and 1843 when the High Peak Railway was completed. From that time on the canal was in decline, with trade down to a handful of boats in 1888 when the 3063 yard Butterley Tunnel suffered its first major collapse. It took 6 years to repair, only to see it collapse again in 1900. This time the closure was permanent cutting off the north west section of the Cromford Canal from the main system. 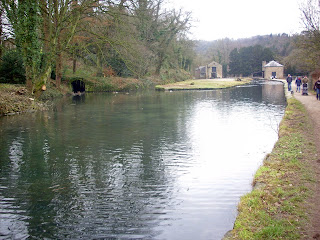 For most of its length beyond the Butterley Tunnel this lockless rural waterway has avoided the ravages of redevelopment but some blockages exist around Ambergate which will demand a creative approach if navigation is ever to be restored. Much work was undertaken by Cromford Canal Co Ltd, a charity which operated in the 1970's and 1980's and focused on the northern section, near Cromford Wharf. Whilst this body was wound up in the late 1980's, they delivered a lasting legacy of an excellent linear water park with a well made towpath which continues to have massive appeal with walkers and cyclists alike. 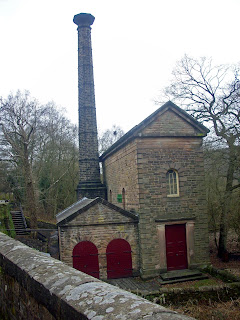 Well, that's a potted history of the north western section. With Tilly's school nearby the canal seemed an ideal destination for a winter walk, with the prospect of a pub lunch at the far end.
We set off with the thermometer hovering on zero and Siberian blizzards forecast, so our expectations were not high. We parked up opposite Arkwright's Mill, which is backed by the feeder into the canal. This car park is free, unlike the "official" car park at the wharf which will set you back about £3 for a 3 hours.
The extensive restoration work undertaken in the wharf area is a delight and provides a beautiful jewel for the current restoration project to work towards. To complete the scene, just add boats. 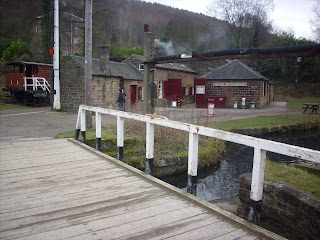 The well maintained towpath leads south past Railway End Bridge (Browns Bridge) which was the southern terminus of the High Peak Railway, constructed in 1831 to connect with the Peak Forest Canal in Whaley Bridge via a series of 3 inclined planes. A canal link was considered but rejected on the grounds of costs, locks and lack of water. 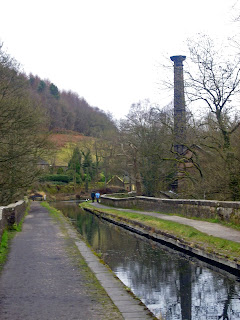 A little further on there is the impressive Lea Wood Pumping Station which was used to raise water from the River Derwent at a rate of 4 tons, three times a minute. The steam engine is still operated by volunteers who raise a head of steam and allow visitors free entry on bank holiday afternoons, belching smoke from its distinctive chimney. 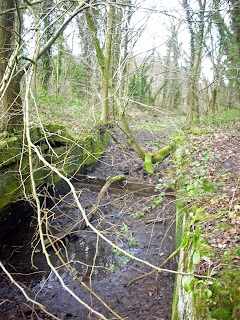 Close on its heels is the Wigwell Aqueduct which carries the canal over the Derwent via a massive stone span with an inset iron trough, reminiscent of the Dundas aqueduct on the Kennett and Avon. The structure can't be viewed well from the towpath but a diversion along the Nightingale Arm and then down the steep bank to the rivers edge will be rewarded with a great view from a perfectly sited wooden bench. 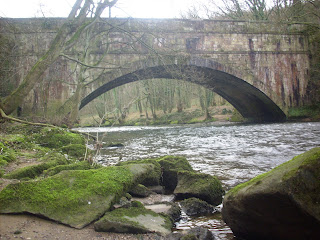 The Nightingale Arm was a half mile private canal, built by Florence's father, to serve a range of quarries, lead works and cotton mills, continuing to be used long after the closure of the tunnel as a connection to the railway transhipment yard until it too was closed in 1936. The canal bed remains, but the trough carrying it over the High Peaks Railway has long since gone, leaving just an outline in the abutments. 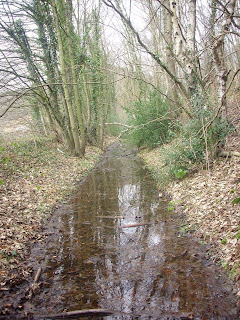 The canal winds round the hillside before passing over the same railway line as it emerges from the southern end of its tunnel. The High Peak Aqueduct crossing is made by a short iron trough, which is now showing signs of age and had been dewatered at the time of our visit. 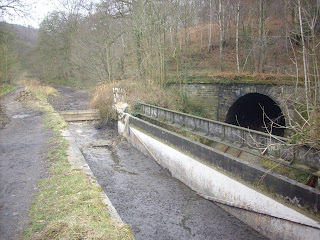 The canal continues to make it's way south, hugging the eastern slope of the Derwent valley till it encounters a high ridge through which the 200 yard Gregory Tunnel was built, emerging into a large, heavily reeded up lagoon. 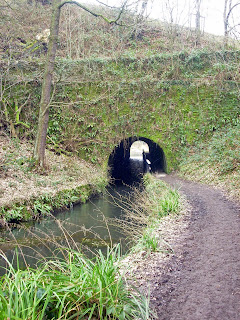 Whilst the CCC Ltd's tour boat John Gray navigated the tunnel as recently as 1988, this is the end of meaningful navigation for anything but canoes. The bed gets progressively closer to surface and at times there depth is reduced to a few inches with obstacles obstructing even such shallow drafted craft. Land drains cascade silt into the canal bed, creating alluvial deltas which have to be periodically dredged to maintain the canals residual drainage function. However, silt is easy to clear and the canal bed remains in good shape. 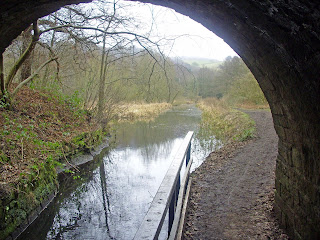 Lunch was taken at the Derwent Inn at Whatstandwell, about an hour and a half south of Cromford Wharf. This pub serves large portions of Sunday Lunch for about £7.00, making it a popular destination for walkers. 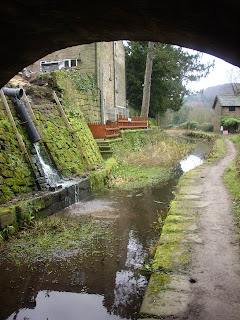 The return journey was completed with snow laden skies gathering over our heads and the temperature dipping below zero. We just had time for a wander up the Nightingale Arm before returning to the car, four hours after we set off. 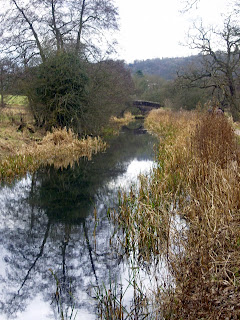 This is a spectacular stretch of canal with a well maintained towpath, ensuring a steady stream of visitors, albeit in two feet or two wheels rather than atop a marine diesel engine. Hopefully the work of the Friends of Cromford Canal will result in a complete restoration in due course, with navigation possible all the way to Cromford Wharf. The journey high up along the side of the Derwent valley is spectacular and could rival the Vale of Llangollen, minus the Poncycellete of course! The linking Erewash Canal isn't currently one of my favourites, with only it's last mile hinting at the boating possibilities which could one day lie beyond the 16 disused locks above Langley Mill.
A lack of time and energy prevented further exploration but, having sampled the first four miles, that means that there are another 12 miles left, plus the Pixton Arm which justifies at least three more visits. As if I need an excuse to poke around a waterway!

Update 6.1.10: THree more visits, what a joke! I havenow been back on four more occasions and have only just reached PInxton. Ironville to Langley Mills remains unexplored.

Email ThisBlogThis!Share to TwitterShare to FacebookShare to Pinterest
Labels: Cromford