My Sunday outing with Tilly had the objective of reaching the western portal of the Butterley Tunnel and, as you may have noticed from my last blog entry, this last section wasn't covered. In actual fact we did make it to the tunnel mouth, but this last section is particularly interesting I feel it justifies an entry in its own right. 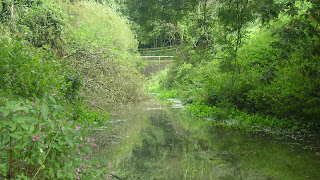 We shuttled the car round to the A610 and parked up in the entrance to a lane which branches off to the north, just before the roundabout with the A38. As previously mentioned, we didn't have the benefit of an OS map so it was a bit of an expedition into the unknown, which started with a scramble under the steel barrier which bears the inviting message "Private, no public right of way". I always take these messages with a pinch of salt and figure that as sins go, trespass is pretty low on the scale, and will probably be overlooked at the pearly gates. However, if my misdeeds are found out before I cross the Styx I generally find that a profuse apology and a rapid retreat works well enough!

On this occasion there was no one in the vicinity and we mooched our way to an abandoned farm, which is now used as a scrapyard and wood store, before branching off into the woods and down the hill in search of what we expected to be a bit of a boggy ditch. We were initially misled by a man made feeder stream, which could potentially have been a contour canal except that it's proportions seemed just too small. A bit more investigation and 50 feet of descent later and we found ourselves on a well made track which led to the western portal of the Butterley Tunnel itself. The Friends of the Canal (or the IWA WRG) have been hard at work in the area having recently erected a sturdy rail over the portal and some very fine steps down to the waters edge to facilitate a closer inspection. 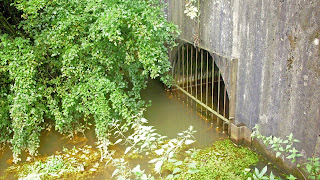 The portal you see is clearly not the original, as the five foot aperture is far too small for a canal boat to pass through. This narrow chanel is in fact not part of the tunnel proper, and is in fact a later addition to carry the Ripley Bypass which runs above. The resulting corrugated concrete culvert is covered by iron bars to protect the canal enthusiasts (and small boys) from their own curiosity.

A steady flow of ochre tainted water flows from the entrance, similar in colour to that coming from the Harecastle Tunnel. This flow of water means that the canal track has to be maintained to prevent flooding as it makes its way west, under the A610 and off towards the hamlet at Bridle Lane. 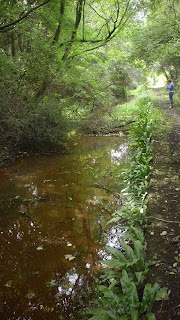 The towpath had been cleared in recent weeks, and the return along the canal was a delight. Ariel photographs reveal this length as running in a deep cutting beside a large sewage works, but there is no sign of the installation from the tree lined waters edge. 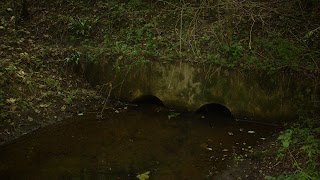 This stretch of canal looks ready to carry craft, were it not for a blocked tunnel at one end and a 60 foot earth embankment at the other. The map describes this location as Ripley Road Bridge but there is no sign of any such structure. All that remains are two insignificant concrete pipes which will ultimately serve as a guide to the tunnel boring machine which will be needed to drive a full sized hole through.

A steep flight of steps allows you to reach the A610 and so a return to the car.

As for the tunnel itself? It is actually one of the longer tunnels on the system and, when restored, will be one of the major landmarks of the route, along with the new aqueduct over the A610 at Ambergate. I will take a look at the tunnel in a future blog entry but rest assured it will be based on research rather than first hand experience.

Enthusiastic as I am, I know which no entry signs are to be taken seriously.