My last visit to the Cromford Canal was back in April when I walked the Missing Link with Tilly, exploring the stretch from Watstendwell Station to The Excavator Pub at Buckland Hollow.

With another Sunday available we decided to try and walk the line a bit further, but had been warned that this section gets pretty indistinct. Ideally, I would have bought an OS map but sadly I wasn't very prepared and instead opted for a close examination of the Google Earth images accessed via the Friends of Cromford Canal website. I then made a couple of rough maps on some A4 paper and hoped for the best. 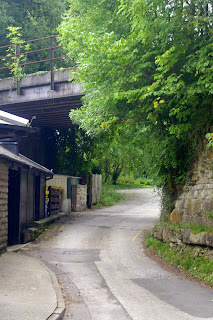 Tilly was nursing a sore ankle so we decided to tackle it in little stages, returning to the car at frequent intervals and try to leapfrog along the line. We therefore parked up in the Excavator Pub car park and set off under the railway bridge, which once spanned the cut. With a bit of imagination the line of the canal is reasonably clear in this area, striding out in a straight line between the trees, all filled in with rubble as it heads towards a large farm. 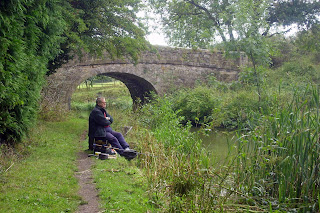 One problem with following a long extinct canal track is that it is very easy to get the levels slightly wrong and as we approached the farm the canal bed appeared to have been obliterated by the digging out of a fishing lake. Imagine our surprise when we spied, sitting at the far end of the lake, a perfect example of a canal bridge, all you need is a narrowboat to complete the scene. Far from merely infilling that canal the debris has been mounded up about 20 feet - but infill is easy to remove.. 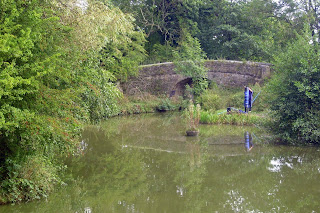 Beyond this lake the line is completely lost as it makes its way over meadowland, at which point we returned to the car and drove round to Bridle Lane with its cluster of what must have been old canal side houses. The bridge at Bridle Lane has been lowered, but the water pipe continues to arch its way over the canal bed. From Bridle Lane the towpath side of the canal is well defined in concrete and, given its remoteness, few obstructions have been placed in its course. 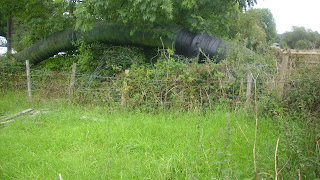 This length remains in water, with a steady flow draining out of the Butterley Tunnel and into the nearby streams via a couple of side sluices. To render this navigable one would only have to close the sluice gates (and pray the the banks hold!). 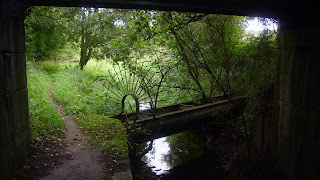 The next major structure is the road bridge at Hartsey Hill. The canal bed is remarkably clear at this point save a low level water pipe. Redirecting this at a higher level would appear to be a relatively simple job. 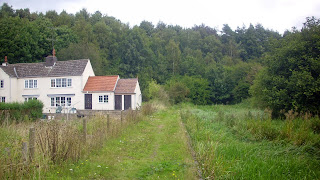 With the towpath deteriorating we approached a substantial house, with what appears to be a well maintained landing stage. However, this is the journey's end for now as forward progress was blocked by the towering ramparts of the A610 Ripley Road. This structure was built in the 1960's, presumably at the same time Bull Bridge Aqueduct was destroyed lower down the valley. The watercourse is now reduced to a couple of meagre looking concrete pipes navigable only by adventerous ducks and rats. Whilst it is a significant obstacle, the embankment is made of earth and it should be possible to bore a tunnel through without disturbing the traffic racing far above.

The bridge referred to in the "Cromford Canal Walk etc, etc, is the Stavhimvalley Canal bridge. The Fish pond referred to was completed by Jim Balls in the 1970s and to my dismay the canal was destroyed around the Excavator Pub a little earlier, I was working near by and I had no idea what was taking place, to me it was large scale vandalison and I was sorry to see the Canal disappearing before my very eyes. If it could be replaced that would be marvellous. In my minds eye I can still see the little steam engine passing behind what became the Excavator Pub, one day it was gone and I never had taken a photo of it, to my regret. There are many stories that I could tell about Buckland Hollow if anybody is interested.

The picture of the house by the canal in your 14th Sept 2009 blog is "The Shieling", which was the house I grew up in. It was originally the wharf house for a coal loading wharf, fed via originally a tramway and then a standard gauge railway from Pentrich Colliery (actually at Hammersmith rather than Pentrich).
The large embankment behind the house was built in the mid 1970s when the A38 extension was built, causing the A610 route to be diverted along this embanked stretch. The old aqueduct at Sawmill/Bullbridge was demolished in the 60s.

There is a photo of the wharf and wagons in the "picture the past "section on Ripley ref. dcav001390-p.72. I am not sure about the railway route,but I think it was either a spur from the Buckland Hollow pit Butterley Co.line, which ran across Hartshay Hill to Butterley or of the Midland railway line from Butterley Junction to Ambergate.The embankment undoubtedly carried the Ambergate to Butterley line and it can be followed from the removed bridge at the junction of the old road to Lower Hartshay and Ripley in a westerly direction ,although he first part is very hard going and people might prefer to start at the bridge behind the Excavator.I was brought up in Ripley and in the 1950 's travelled to school in Belper-St. Elizabeth's- along the old road,where the one lane under the aqueduct caused many delays. Gerry Keating