Lord Hay's Canal - part 1
Wyrley and Essington
October 2011
A physical walk of the Lord Hay's one mile canal of 1800 presents a bit of a challenge. The canal was privately owned during its working life and its line has reverted to private ownership following its closure in 1954, which means no public footpaths either along its length or crossing its path. So, if you want to take a look its going to be private land all the way, a veritable Mastermind walk - once you have started you have to finish, with no expedient get outs till you emerge at Stafford Road at the far end. 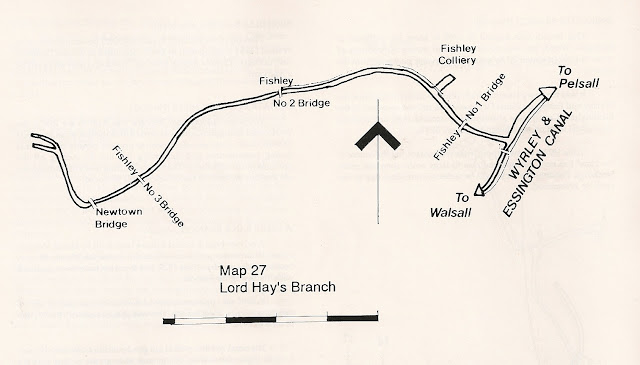 Lord Hay's Branch Canal - taken from Richard Chester Browne's "The Other 60 Miles".
But that's jumping ahead. Lets start at the beginning and follow this line methodically.To do this one justice will take three posts:
1. Wyrley and Essington junction to Fishley Bridge Number 2 - this post
2. Fishley Bridge 2 to Bridge 3
3. Newtown Bridge (Stafford Road) and beyond 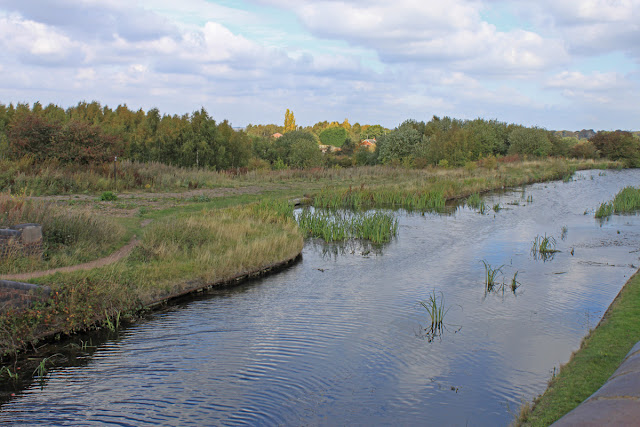 Junction with the Wyrley and Essington Canal
The line starts with the junction at the Wyrley and Essington Canal, its splayed entry still plain with the first hundred yards completely infilled by BW who use the area as an official dredging site. Then its Fishley No1 Bridge which carries Fishley Lane over the line. The southern end is choked with rubble but the northern portal is visible among the undergrowth. 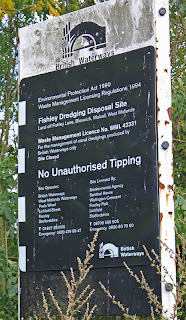 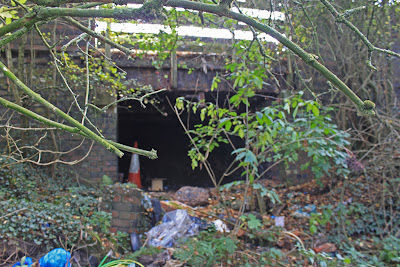 Fishley No 1 Bridge
The line north is choked with brambles so if we are to make progress a detour is needed. My initial thought was to make use of the fairways of the adjacent Bloxwich Golf Club whose grounds border the first half mile. Such an approach would dictate a late evening sortie but this opportunity arose in late morning to I decided to probe the line from the fields to the north. Access to the start, the site of the old Fishley Colliery, is hampered by copious barbed wire but a couple of hundred yards up the road a public footpath provides a walk on route.  Don't bother to look for the Fishley Colliery basin. Where once there was an inlet there is now a mound of relocated spoil. 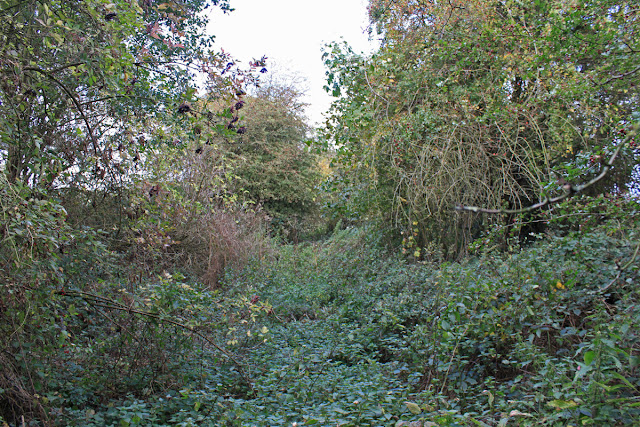 Overgrown channel north of Bridge No 1
You catch glimpses of a bramble choked channel as you head north and then a fence forces you into the channel itself, a clear saucer shape indent sitting atop an earth embankment. 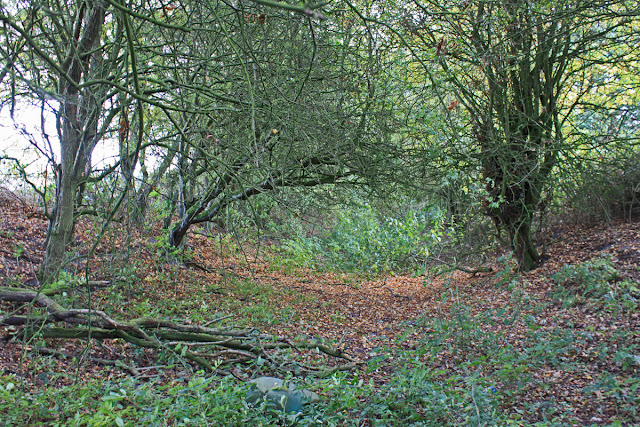 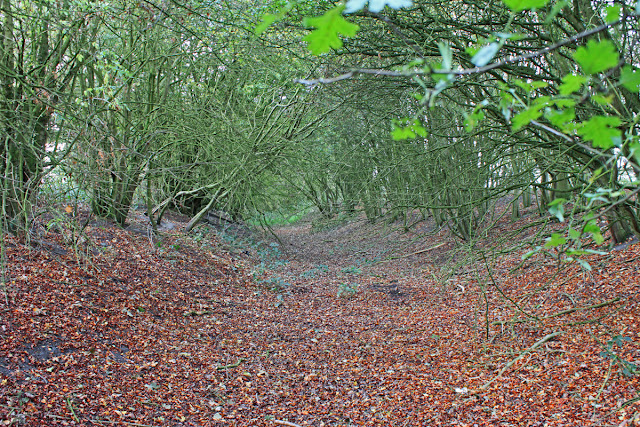 The clear channel beside Bloxwich Golf Club
This section represents a perfectly preserved canal track, remote and therefore devoid of the usual debris, not a lorry tyre in sight. This situation persists way beyond the Golf Club when suddenly you are faced with a huge pile of rubble. This point neatly illustrates the problem of canal hunting. Where you expect to find a depression you can so often end up standing on a mound! 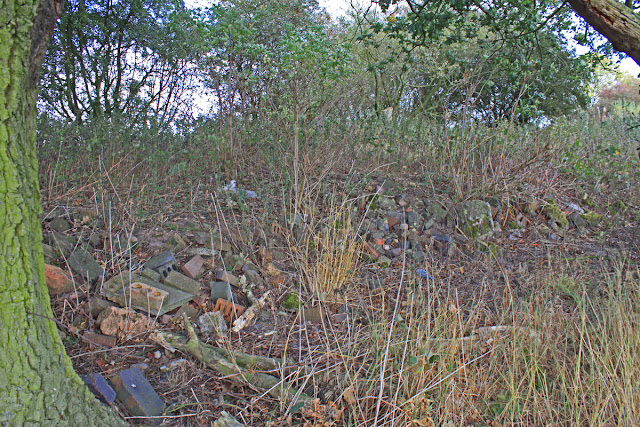 Start of the rubble infill
From here the whole line has been used as a tip, this section filled in from the remains Fishley No 2 bridge, of which there is no sign. The site is still used as a dump with a farm track winding across the fields. This also marks the end of the broad canal track, with the course ploughed into the fields but its line marked by hedge. 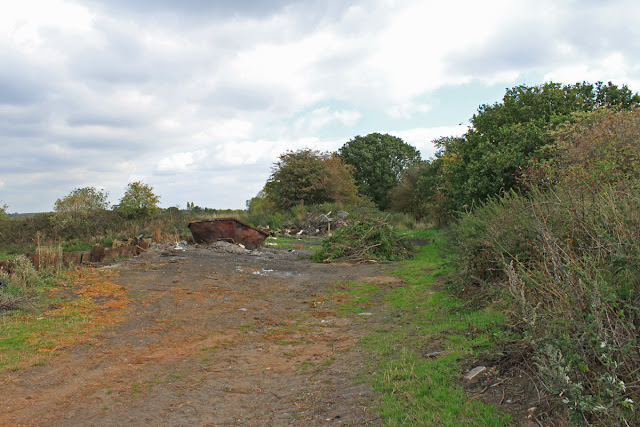 Fishley Bridge 2 - site of an active tip
Posted by Andy Tidy at 6:00 am

Hi again Andy
Managed to visit the Lord Hays Branch today, walked the whole length from Fishley No1 to no3 bridge. A few scratches and a bad back from stooping under brambles. But passable...just. No way you could do it after Spring once the vegetation gets going! Had to walk through fields from Fishley no 3 to Stafford Rd. Luckily no one challenged me. Really glad I made the effort to do this one...not that I'd rush to do it all again. Not without a scythe and suit of armour! Thanks for inspiring me and giving the info on it! Thanks, Craig

Craig - I'm glad you enjoyed it, a worthwhile route to explore. I ducked out into the field after Fishley No 3. Did you have a pint in the pub to celebrate your success?
Andy

Andy, sadly no, didn't get to have an ale after Lord Hays, as time necessitated a hasty return to Walsall. Off to try my luck with the Essington branch next week, weather permitting. Is it possible to do this coming from Sneyd and cross the Wyrley Bank branch as it bends towards Bloxwich, or do you have to come from the Essington end? On google earth it looks straitforward enough, but what do you reckon? Craig

Craig
You might get in from the Sneyd end but it would mean crossing an actively used scrap yard with guard dogs. I went in from the Bloxwich end near Rose Cottage which was easy. Good Luck.