The road that led to Crick

The last leg of our journey was mostly spent underground - in the Crick tunnel.

Crick is notorious for its wetness at the eastern end but compared to what was outside it was a veritable desert.  The heavens opened and the rain cascaded down all morning dampening the spirits of all those trying to erect their marquees, with the canvas being ripped from numb fingers.

As an inland waterways boat festival you would imagine that carrying commercials loads would be taken in their stride, but no. The  whole idea of canals being used to carry produce seems to be a bit alien. And we were the only boat to show up and ask a surprised harbour master permission to dock in the main marina basin and tranship our load to the Water Vole Gourmet Food Marquee.

Of course, all did not go quite as planned. First we were expecting tables and therefore didn't bring our own. Our panic was allayed when the organisers magic'd a couple of trestle tables out of this air! Hurray for the WW team. Then the weather sought to prove whey canal transport is a stupid idea. The rain was either heavy or torrential as I ferried an overloaded sack barrow to and fro - getting soaked to the skin. Ten loads later and I vacated the trip boat mooring with Persident literally steaming into our vacated slot. 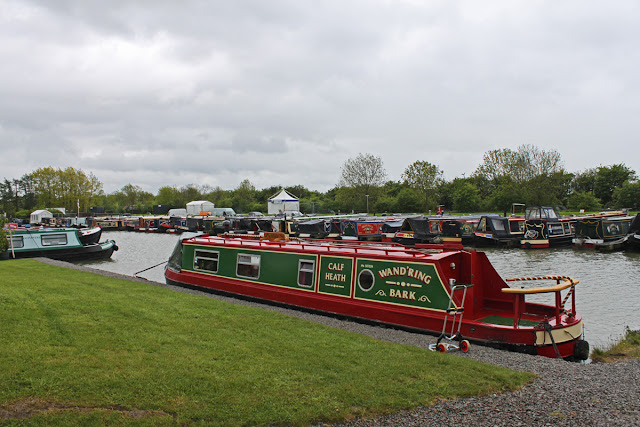 Amid all the rain I only got  one photo of Wand'ring Bark being unloaded in the main basin, slick with cold rain.

Amid all the rain I did squelch past one engine manufacturer as they hauled their shiny red demo model from the truck. I was amazed to see that they have cracked the rising cost of diesel problem. Instead of fuel they had come kitted out with a huge pallet of Carlesburg Lager - maybe that accounts for the huge number of Carlesburg cans bobbing in the BCN.

But the panic is over and as I sit here in the cratch (lousy 3G signal) supping my home brew life seems better. Coffee was shared with Adam and Adrian (Briar Rose), the stall is erected and loaded with lots of Jams, Jellies, Chutmeys, Vinegars and Mustards, and all we have to do is walk over and start to trade at 10.00am.

Perhaps the best news is that the bad weather of the last few days has passed and its now set fair for the coming weekend. The festival site looks great with loads to see so, if you are looking for a trip out this weekend you could do a lot worse than come over to Crick and share in the  experience of the UK's premier boat show.

Have a great time, weather should be a lot better they say. Although Tacet is not far away, we are in Sussex for weekend.