Escape the Rat Race (EtRR)
Every now and again I come across something on the web that makes me stop, pause and take a second look.

Today I stumbled across the web page for Escape the Rat Race and their offering of a number of "more mature" narrowboats, available for long term rent. Interesting, I thought - particularly the minority ownership aspect which is presumably employed to get around the commercial licensing issue.

Then I took a closer look at the craft on offer and the first one caught my eye - a 36ft Springer in a familiar shade of Dark Brunswick Green (aka British Racing Green). Hang on, I know that boat, it's the Honey I took down the Thames in 2005. It's the same Honey I painted British Racing Green in the first place at Calf Heath. She has been refitted and renamed Anna Devon but she is, without doubt, the same craft.

I remember seeing Granny Button's comments about this concept last October and then recalled some rumours that her owner had gone into "the canal boat business". I even remember a phone call from someone who had previously borrowed her asking for the exact colour of paint I had used. 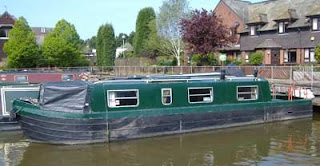 All the bits fell into place. Honey was lent out one winter never to be seen again and here she is, still bobbing along the cut, probably with a leaky stern gland and noisy Lister engine. I have much to thank Honey / Anna Devon for. It was my travels on her that led directly to the purchase of Wand'ring Bark and all that has ensued. I also have a photo of her for my blog entry.

Thanks for the memories Alex and Tim.
Posted by Andy Tidy at 6:00 pm